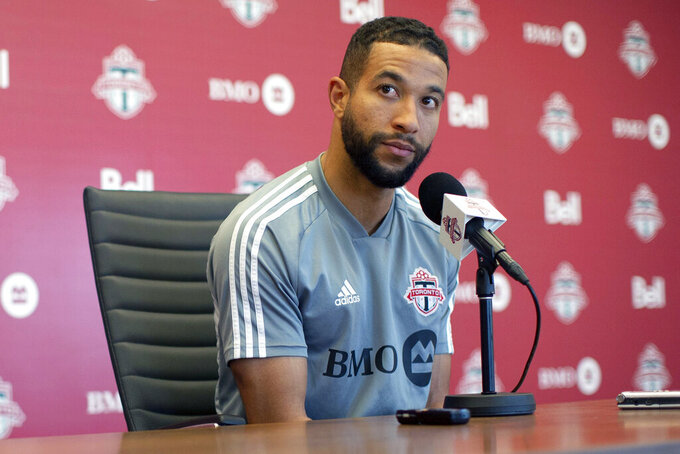 FILE - In this Nov. 13, 2019, file photo, Toronto FC soccer player Justin Morrow speaks to the media during an end of season availability in Toronto. A group of African American Major League Soccer players have formed a coalition to address systematic racism in their communities and bring about change within the league. The coalition is the result of an Instagram group formed after the death of George Floyd at the hands of Minneapolis police, which spawned a wave of nationwide protests against racism and policy brutality. Started by Toronto FC defender Justin Morrow, the group grew to some 70 MLS players, who decided to act and the Black Players Coalition of MLS was born. (Chris Young/The Canadian Press via AP, File)

A group of black Major League Soccer players has formed a coalition that seeks to address racial inequities in the league and across soccer, and to positively impact local communities.

The coalition is the result of an Instagram group that began after the death of George Floyd, which sparked a wave of nationwide protests against racism and policy brutality.

Started by Toronto FC defender Justin Morrow, the group grew to some 70 MLS players, who formed the Black Players Coalition of MLS.

Morrow said players were already under stress because of the new coronavirus when they were threatened with a lockout during contract talks. The league suspended play March 12 because of the pandemic.

“And then on top of that charge, George Floyd is killed. And so it kind of felt like my world was crumbling. And when I reached out to my black soccer player peers, they all felt the same way,” Morrow said. “When we came together on that call, it was the most hopeful thing in one of the darkest weeks of my entire life.”

Morrow said there are three goals: to give black players a voice in the league; to encourage black representation in the players' association and higher levels of MLS; and to help local communities.

“All of us came together with a genuine interest because we never have seen ourselves as just athletes. We’ve always seen ourselves as black men wanting be more than that. Public constraints have always told us that we’re athletes, and we have never felt that way,” said Minnesota United's Ike Opara. “And so to be able to come together in this way has been truly special for us. And moving forward, we’re not about just wanting to say these things, we want to mean what we’re saying. We believe in what we’re saying. And we truly want to be the change because for so long, a lot of us have felt like we’ve been on the outer edge or on the sidelines.”

The coalition has proposed training to promote cultural education and combat implicit bias. It also wants to hire a chief diversity officer. The group has discussed developing the game in black communities and partnering with charities. The group has already secured $75,000 in charitable contributions from the MLS Players Association.

“Major League Soccer proudly recognizes and supports the Black Players Coalition of MLS -- a group of players who today, on Juneteenth, have established themselves as influential change leaders,” MLS said in a statement. “The league looks forward to continued and longstanding collaborations.”

The MLS Players Association also vowed to work with the coalition.

“We must seek to understand and change our misconceptions and shortcomings. We must actively work to be a part of this change. The MLSPA proudly and humbly accepts the challenge that the BPC has presented, and we look forward to working hand in hand to make our sport and our communities a better reflection of all of us,” the union said in a statement.

Ebobisse, who recently blogged about his anger and frustration over Floyd's death and the reaction to it, said he hopes the coalition can be a sustainable path forward in the fight against systemic racism.

“A lot of black leaders have always told us that the arc of the moral universe bends toward justice, but it doesn’t bend on its own. It’s going to be a long, uphill battle that’s going to have ebbs and flows and it’s going to go in different ways,” Ebobisse said. “But our organization is here for the long run and we hope that our partners and individuals on the ground support us and also find ways for themselves to get involved on a daily basis.”