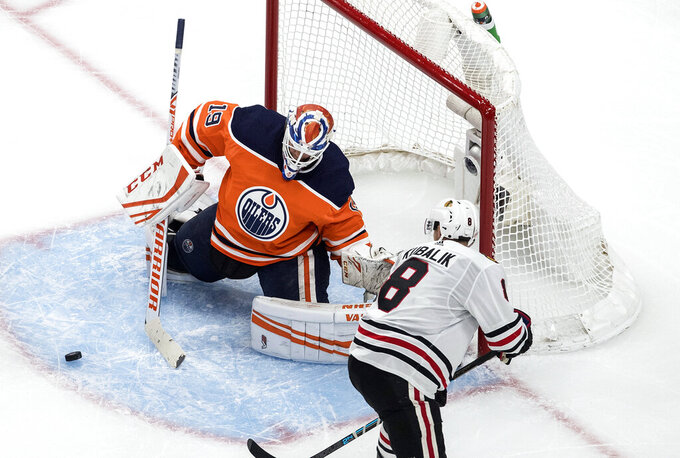 EDMONTON, Alberta (AP) — Rookie winger Dominik Kubalik scored two goals and added three assists, leading the Chicago Blackhawks to a 6-4 win over the host Edmonton Oilers in the opener of their best-of-five qualifying round series on Saturday.

Blackhawks captain Jonathan Toews had two goals and one assist. Brandon Saad added a goal and an assist and Dylan Strome also scored for Chicago.

Connor McDavid, Leon Draisaitl and Ryan Nugent-Hopkins each had a goal and two assists for Edmonton. And James Neal scored late for the Oilers, who trailed 6-2 after two periods.

McDavid said the Oilers first need to review the game tape and go from there after dropping the series opener.

“There’s lots that needs to get done,” said McDavid.

“It wasn’t good from the start ... I thought we did a better job as the game went on of keeping it simple. That’s what our team needs to do ultimately is be simpler.”

Kubalik's five-point game was a continuation of the torrid scoring pace set by the 24-year-old Czech forward and a Calder Trophy finalist as the league's rookie of the year.

He had 30 goals and 16 assists before regular-season play was halted in mid-March because of the COVID-19 pandemic.

“We got scored on in the first couple of minutes but I we came back pretty quick,” Kubalik said. “I felt really good, everything went my way, so obviously it’s nice but it’s just the first game. We’ve got to keep going.”

In Wednesday’s exhibition game against St. Louis, he had two goals and an assist.

Kubalik and the Hawks took control early in the matchup, the first in Edmonton as part of the NHL’s restart.

He had three assists as the Hawks blitzed the Oilers with four goals in the first 13 minutes of the game to take a 4-1 lead.

Kubalik then scored twice in the second period, his first goal chasing starter Mike Smith from the Oilers net (five goals on 23 shots), and his second getting past Smith’s replacement, Mikko Koskinen, to make it 6-2. Koskinen had 18 saves.

Three of Edmonton’s goals came on the power play.

Things looked good for the Oilers, and their top-ranked power play, early in the first period. The Hawks took a penalty and McDavid walked in from the faceoff circle and fired a wrist shot over the right shoulder of Hawks goalie Corey Crawford to make it 1-0 at the 2:34 mark.

Then the wheels came off for the Oilers.

Smith, notorious as a wandering gambler out of his crease, coughed up the puck behind the net to Strome, who proceeded to bank it in off his pad and into the net at 5:51.

On the next three goals, Smith got very little help from this teammates, who wilted under the Blackhawks’ ferocious forecheck, often caught standing around or turning over the puck.

At 7:56, Toews, left alone in the slot on the power play, buried a wrist shot under the bar, glove side on Smith.

At 9:17, Olli Maatta's blueline wrist shot was double deflected in the slot to fly over Smith’s pad and in. Saad got credit for the goal.

At 12:57, Kubalik swooped around the net and dished the puck to an open Toews in the crease, who redirected the puck past Smith.

The Oilers showed some life early in the second period. They made it 4-2, again on the power play, when McDavid, behind the end line, passed the puck to Leon Draisaitl, who one-timed it past Crawford.

Kubalik quickly got that one back, on the power play, taking a cross-ice pass and shooting from the top of the faceoff circle to Smith’s left, sniping the puck over his shoulder and into the net. That was it for Smith.

With time winding down in the period, Kubalik, standing in front of the net, deflected Duncan Keith's blueline slaps hot to make it 6-2.

The Oilers scored two goals with less than four minutes to go to make things interesting.

The game was played in front of tarps, massive video screens, and empty seats at Rogers Place, which is hosting the 12 Western Conference teams as the NHL completes the 2019-20 season.

While Edmonton, with a better regular-season record, was technically the “home team” the sights and sounds of the game were neutral. Goal horns would sound when either team scored, and there were revved-up announcements over the loudspeaker when the Hawks or the Oilers went on the power play.

Goaltending for the Oilers was a question mark heading into the series.

The real goaltending question mark was supposed to be Crawford.

The veteran goalie is seen as critical to Chicago’s success, given its defensive struggles this season, but only began skating again last week after contracting COVID-19. Crawford was 16-20-3 with a .917 save percentage in the regular season.

The Blackhawks, 32-30-8 in the regular season, were decided underdogs.

They were trending out of the playoff picture and finished 23rd overall when regular-season play was suspended. They are the bottom seed among the 12 teams playing in the Western Conference elimination round.

The Oilers, with a 37-25-9 record (12th in NHL), were seen as the favorite, especially given they have the two top point-getters this season in the NHL: Draisaitl (110 points) and McDavid (97 points).

McDavid was asked after the game if Edmonton, as the fifth seed in the Western Conference, took bottom-seeded Chicago too lightly.

”(It’s) a team that has had so much success in the past. They’re battle tested and they came out and did exactly what we thought they would do, and we just weren’t ready,” he said.