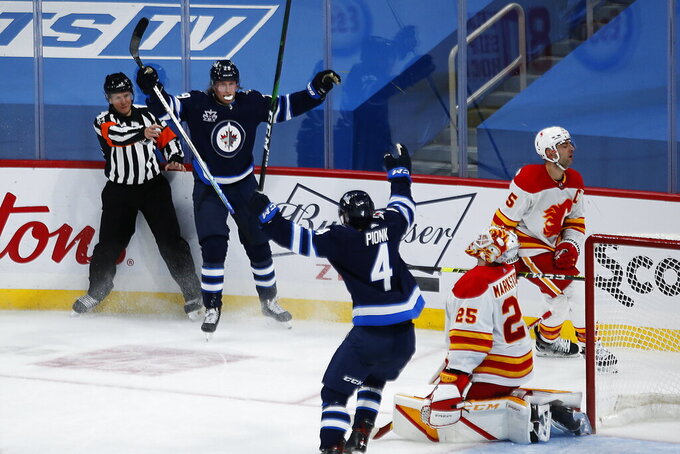 COLUMBUS, Ohio (AP) — After Pierre-Luc Dubois was benched for lack of effort two days ago, the Columbus Blue Jackets on Saturday traded the unhappy star center to the Winnipeg Jets for Patrik Laine and Jack Roslovic.

Dubois, Columbus' top-line center, made it clear when he signed a two-year contract before the season that he wanted a change of scenery. Laine, an All-Star winger also had been asking for a trade.

Columbus general manager Jarmo Kekalainen said the deal had been in the works and wasn't hastened by the rift between Dubois and Blue Jackets coach John Tortorella, who benched the 22-year-old star for loafing in Thursday's loss to Tampa Bay.

“We've been working on this for a while and we've always said that it could take a while until we find the right deal, but if the right deal is on the table we're ready to move fast,” Kekalainen said. “So just everything came together."

Hours after the trade, the Blue Jackets played their best game of the season to beat Tampa Bay 5-2.

Dubois is a dynamic center whom the Blue Jackets hoped would be one of their building blocks. But he declined to sign a long-term deal and let it be known he wanted to play elsewhere.

After leading the team in scoring with 49 points last season, Dubois had one goal and no assists in the first five games of 2021.

Laine, a 22-year-old Finnish winger, has scored 36, 44, 30 and 28 goals in each of his four NHL seasons but has grown into a better all-around player in the process. Roslovic, a 23-year-old center who grew up in Columbus, has 26 goals and 41 assists in 180 career games.

Laine said he is open to a long-term deal with Columbus.

“It’s obviously a big thing for me that a team wants me and wants me bad," he said. "That was obviously a great thing for me. I’m open, for sure. Hopefully that’s going to be a spot where I’m enjoying life, I’m enjoying playing hockey and everything I’ve heard about the organization and the city, it’s only positive things.

The trade included signing Roslovic, a unsigned restricted free agent, to a two-year, $3.8 million contract through the 2021-22 season.

“He's a hometown boy, and we think he can play center in the National Hockey League,” Kekalainen said. “He's got tremendous speed and skill and hockey sense, and we're excited to have both those players join the Blue Jackets.”

The Jets will also get a third-round pick in the 2022 draft.

Roslovic, who had been working out in Columbus recently, may be available as soon as he gets through the COVID-19 protocol, Kekalainen said. The situation may be a little more complicated for Laine, who landed on the Jets' injured reserve list this week with an unspecified upper-body injury and has visa issues to work out. Kekalainen didn't say when Laine would be ready to play.

“I won’t lie. It’s kind of sad,” Jets captain Blake Wheeler said of Laine being traded. “There weren’t any smiles, put it that way. I think we were both sad we’re at this point. But he has nothing but a fan in me.”

Maurice isn’t worried about how Dubois’ time in Columbus ended — he didn't engage in the corner and glided to the bench, where he sat the rest of the game Thursday.

“I don’t know what went on there,” Maurice said. “None of us were a part of what went on there. You have no idea what went on in the background, so I’d be very careful with my character assassinations before I get to meet the man. He’ll walk in here, he’ll present himself, we’ll accept him with open arms as we always do with new players.”