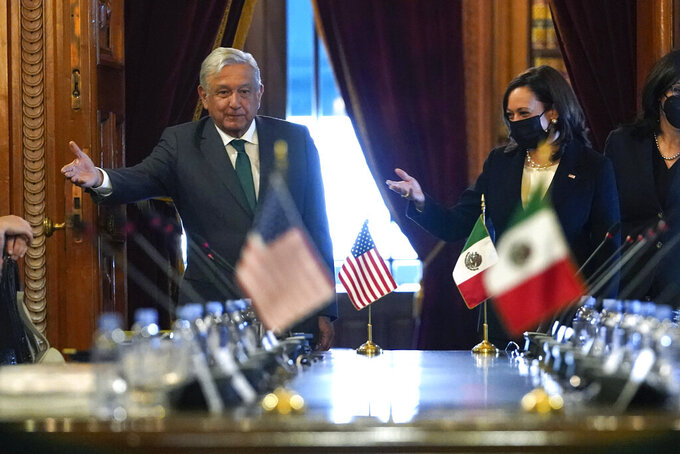 MEXICO CITY (AP) — Vice President Kamala Harris came to Latin America to deliver a message rather than clinch some kind of concrete deal.

She bluntly told migrants not to travel to the United States. She spoke of the evils of government corruption that lead to dislocation. She urged nations to increase enforcement at their borders.

She completed the journey without securing any commitments to increase immigration enforcement or expand pathways to legal migration. But she also did so without a significant mistake.

It was her first international trip aboard Air Force Two, and a first step toward establishing herself on a core foreign policy issue — one that has bedeviled American presidents at least since Ronald Reagan.

But as much as the trip offered her a chance to step onto the international stage speaking for the Biden administration on a key issue, it also highlighted the ambiguous nature of the portfolio President Joe Biden has handed her — to address the root causes of the spike in migration at the U.S. border.

Harris came away from her meetings with the Guatemalan and Mexican presidents able to talk about commitments to work more closely with them on economic development and on combating trafficking, smuggling and corruption. But she also faced persistent questions about her decision not to visit the U.S.-Mexico border. Republicans have seized on the fact that neither Biden nor Harris has visited the border to argue that the administration is absent on the issue.

Harris was called out by the Democratic left, too, for using her platform in Guatemala to tell people thinking of fleeing to the U.S. that they should not. “Do not come,” she said, invoking the dangers of the trip as well as the Biden administration’s commitment to border security. “Do not come.”

Democratic Rep. Alexandria Ocasio-Cortez of New York called those comments “disappointing” and noted that it is legal to seek asylum.

While White House aides have repeatedly tried to clarify that Harris' assignment is narrowly focused on diplomatic solutions to the immigration situation, she was again forced to spend part of a trip meant to showcase her diplomatic chops explaining herself.

“It would be very easy to say, ‘We’ll travel to one place and therefore it’s solved,'" she said. "I don’t think anybody thinks that that would be the solution.”

Her foreign debut was a complex one as she attempted to engage in the deepest reasons people leave what they know to take on the perils of trekking to the U.S. border and trying to get across, whether illegally or through their right to ask for asylum.

Harris often speaks about her belief that “most people don’t want to leave home,” as she said during her meeting with Guatemalan President Alejandro Giammattei. She says her goal is to restore hope to the region so residents no longer feel compelled to flee their homes for better opportunities in the U.S.

The criticism from both Republicans and some Democrats underscored the politically fraught nature of the assignment and the difficulty Harris faces in finding success with an intractable challenge that’s only grown in recent months.

Illegal border crossings have increased steadily since April 2020, after President Donald Trump invoked pandemic-related powers to deny migrants the opportunity to seek asylum, but they further accelerated under Biden.

The new president quickly scrapped many of Trump’s hard-line border policies — most notably the program that made asylum-seekers wait in Mexico, often in dangerous conditions, for court dates in U.S. immigration court.

U.S. border authorities encountered nearly 19,000 unaccompanied children in March, the highest on record. Overall, more than 170,000 encounters were reported on the border in April, the highest level in more than 20 years. The numbers aren’t exactly comparable because getting stopped under pandemic-related authorities carries no legal consequences, prompting some people who are caught once to keep trying.

Still, analysts praised Harris' first in-person foray into the region, noting that even as her political opponents attempt to distill the migration issue to the situation at the border, the vice president reflected a clear grasp of the nuances of the challenge.

“You’re completely unrealistic if you think there is some magic bullet to stop this stuff,” said Eric Olson, director of policy at the Seattle Foundation, a group focused on good governance in Latin America. “There’s very little you can do to stop migration quickly. Better to acknowledge it and set the groundwork to address the long-term issues.”

Olson praised Harris for pledging during her press conference with the Guatemalan president to fight corruption and for focusing her meetings in the region on civil society groups and small-business owners rather than the private sector.

And he said that getting Mexico to commit publicly to working with the U.S. on economic opportunity in Honduras, Guatemala and El Salvador was a significant step forward, because traditionally Mexico has treated Central America as “an annoying guest that just walks through your yard.”

“This is a first, maybe weak step, but it is something because they have not traditionally accepted that as their goal,” he said.

As the first female U.S. vice president, Harris spent much of her trip focused on elevating women in the region. She met female entrepreneurs in Guatemala and Mexico and announced a $40 million program in Guatemala focused on creating opportunities for young, primarily Indigenous women.

Harris, who is also the first Black and South Asian vice president, said her place in history was on her mind and informed her approach as she toured the region.

“I welcome showing anyone, whatever your race or gender, that you may be the first to do anything, but make sure you’re not the last," she said. "And in that way, let’s pave a path where we create an opportunity for others to become the first in their family or their community to do those things that perhaps others didn’t think they were capable of, but God has given them that capacity to achieve, and with a little help, they will,” she said in Guatemala.

The trip was Harris’ busiest public foray yet. She held lengthy bilateral meetings with the Guatemalan and Mexican presidents, presided over roundtables with entrepreneurs and labor leaders, and took questions from the press multiple times a day.

She began the trip on Air Force Two with a brief visit with her traveling press, bringing cookies baked and decorated to look like her back to reporters to mark the start of her journey. She ended her time in Mexico with an extended press conference, in which she fielded questions on topics including immigration enforcement and voting rights.

She turns from one intractable problem to another back in Washington, where the White House has said she’ll spend the next week hosting events focused on voting rights as Democrats struggle to find enough support in Congress to write broad voting protections into law.