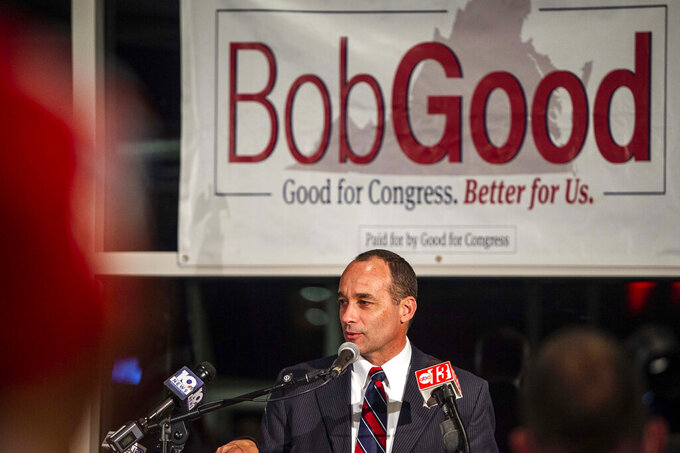 No Democrat has won a race in the sprawling district since 2008, but the Democratic Party was optimistic after Riggleman’s downfall.

The ultraconservative Good, a former athletics official at evangelical Liberty University who recently finished a term on the board of supervisors of mostly rural Campbell County, made his Christian faith a centerpiece of the campaign.

The 37-year-old Webb has a law degree and is director of health policy and equity at the University of Virginia. He formerly worked in a White House fellowship program in both the Obama and Trump administrations.

“While this is not the outcome we hoped for, it has truly been an honor to run to represent this district in Congress,” Webb said in a statement.

While Democrats fell short in that House race, they had reason to cheer statewide results. Democrat Joe Biden defeated Republican President Donald Trump in the race for president and U.S. Sen. Mark Warner was reelected to a third term.

It was too early to call who won two other competitive U.S. House races in a test of whether Virginia’s “blue wave” has staying power. Democrats in those races were trying to hold on to the competitive seats they flipped in 2018.

Election officials in several counties were still trying to tally huge numbers of absentee and early votes and it might still be several days before the winners in those two races are determined. New voting laws and other changes made in response to the coronavirus pandemic made it easier to vote early, and more than 2.75 million voters cast ballots before Election Day.

Spanberger and Luria are part of a group of moderate Democrats who came to Congress with deep military and intelligence experience. Their credentials were instrumental in pushing the House to impeach Trump over allegations that he pressured Ukraine to investigate Biden.

The sprawling 5th District stretches vertically from the border with North Carolina north across nearly the entirety of the state and was being watched closely as a potential bellwether. No Democrat has won a race there since 2008.

Colin Winter, a 43-year-old small-business owner who lives in Nelson County, said he was excited to vote for Webb, a younger-than-usual candidate. He also found Webb’s experience as a physician appealing.

“He’s certainly seeing the COVID crisis firsthand in a way that a lot of us don’t. I think that will give him valuable perspective as a congressperson,” Winter said Tuesday.

Henry Wood, a lifelong farmer and resident of Buckingham County, voted for Good.

Wood said he disagrees so strongly with the Democratic Party’s platform, particularly on the issue of abortion, that he likely would have voted for whoever the Republican candidate was in the 5th District. But he said he particularly liked Good and even hosted a fundraiser for him, finding him to be down-to-earth, realistic and values-driven.

Trump made noise about carrying Virginia, doing a quick campaign rally at the Newport News airport in September that drew thousands of supporters. Overall, though, the state was not a focus of either presidential campaign. While Virginia was considered a swing state as recently as 2012, it has trended sharply toward Democrats over the past decade. Republicans have not won statewide in Virginia since 2009.

Voters also approved a referendum that puts next year’s redistricting in Virginia in the hands of a bipartisan commission. The amendment to the state constitution caps a yearslong effort by reformers looking to end partisan gerrymandering. A bipartisan commission of citizens and legislators equally divided between Democrats and Republicans will now redraw the state’s congressional and General Assembly districts to conform with the 2020 Census.