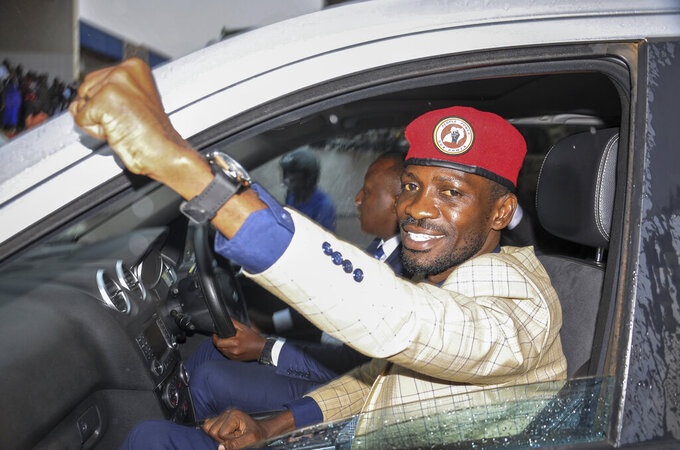 FILE—In this file photo of Thursday Jan.9, 2020, Ugandan presidential hopeful and political activist Bobi Wine, whose real name is Kyagulanyi Ssentamu, raises his fist in the air to gathered supporters as he leaves after meeting with the Electoral Commission, in Kampala, Uganda. A bodyguard for Ugandan opposition leader Bobi Wine was killed and two journalists injured on Sunday, Dec. 27, amid violent confrontations between security forces and followers of the singer and lawmaker who is challenging the country's long-time leader. A tearful Wine, whose real name is Kyagulanyi Ssentamu, said his bodyguard had died of his injuries after allegedly being run over by a truck belonging to the military police. (AP Photo/Ronald Kabuubi-File)

KAMPALA, Uganda (AP) — A bodyguard for Ugandan opposition leader Bobi Wine was killed and two journalists injured on Sunday amid violent confrontations between security forces and followers of the singer and lawmaker who is challenging the country’s long-time leader.

A tearful Wine, whose real name is Kyagulanyi Ssentamu, said his bodyguard had died of his injuries after allegedly being run over by a truck belonging to the military police. The victim, Francis Senteza, was attacked while helping to transport a journalist injured in an earlier confrontation between police and a group of Wine's supporters, he said.

Wine was campaigning Sunday in parts of central Uganda where he has considerable support. As his convoy tried to proceed from one rally to the next, police fired tear gas into the crowd, injuring at least two journalists.

Cameraman Ashraf Kasirye, a member of a TV crew that follows Wine wherever he goes, suffered a serious head injury.

“We are hoping against hope that he will live,” Wine said of Kasirye on Twitter.

Another journalist, Ali Mivule of local broadcaster NTV, was injured after a tear gas canister hit his leg, according to his employer. His condition was said to be stable.

Police said in a statement that while trying to quell confrontations with Wine's supporters, “journalists were regrettably caught up during the process of dispersing the violent group.” Kasirye is in critical condition after being apparently hit by a tear gas canister, it said.

The three casualties are the latest victims of election-related violence as Uganda's security forces are accused of trying to stop Wine from holding raucous public rallies.

Uganda faces growing pressure from the international community and rights watchdogs to respect human rights ahead of polls scheduled for Jan. 14. The arrest and detention last week of a prominent rights attorney, Nicholas Opiyo, over criminal charges has added to what some critics see as a campaign of repression targeting civic leaders, activists, journalists and perceived political opponents.

President Yoweri Museveni, who has held power since 1986, faces the strong challenge of Wine, who appeals to young people wishing to see a change of government. Museveni's government is frequently criticized for corruption as well as widespread joblessness in the urban centers. Wine has repeatedly urged Museveni to retire, saying he would guarantee his safety.

Wine's campaign events have become increasingly affected by violent confrontations with authorities and Wine himself has been arrested many times by police who accuse him of trying to disrupt public order.

Electoral authorities on Saturday banned campaign events in some urban areas, including the capital Kampala, citing an urgent need to control the spread of the coronavirus. That decision has been criticized by some who see it as a ploy to prevent opposition figures from displaying their support in areas where the ruling party is not so popular.

Museveni is able to seek more time in office after lawmakers removed the last constitutional obstacle — age limits — to a possible life presidency for the 76-year-old leader.

Uganda has never seen a peaceful transfer of power since independence from Britain in 1962.