Boeing sees uptick in airplane orders as travel picks up 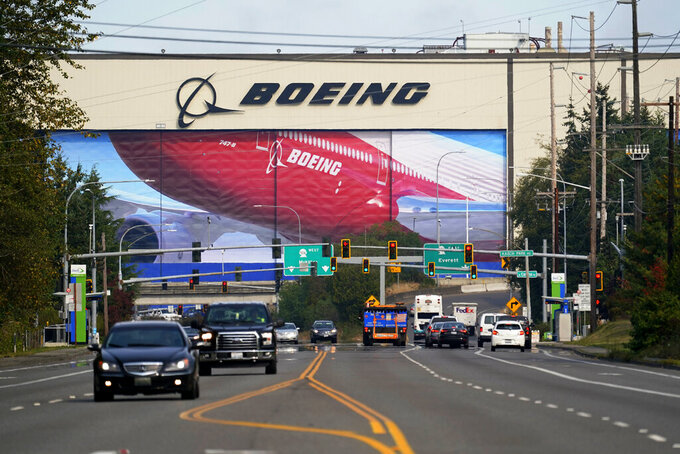 FILE - In this Oct. 1, 2020 file photo, traffic passes the Boeing airplane production plant, in Everett, Wash. U.S. manufacturers expanded in March 2021 at the fastest pace in 37 years, a sign of strengthening demand as the pandemic wanes and government emergency aid flows through the economy. (AP Photo/Elaine Thompson, file)

Boeing orders picked up in March, fueled by a major deal with Southwest Airlines that helped to offset another round of cancellations for its 737 Max airliner.

Boeing said Tuesday that it received 196 orders in March, including the previously announced 100 from Southwest, while losing 156 to cancellations. Turkish Airlines scrapped most of a commitment for 50 Max jets, replacing some with options.

The net gain of 40 orders raised Boeing’s first-quarter total to 76.

Boeing orders have plummeted over the past two years, first from the grounding of all 737 Max jets after two of them crashed, and later from a pandemic that brought global travel to a standstill and quashed airline demand for new planes.

Travel is picking up with the rollout of very effective vaccines, but it remains far below pre-pandemic levels. In the U.S., nearly 1.5 million people a day have gone through airport checkpoints this month, down from more than 2.3 million people per day in early April 2019.

Boeing needs sustained growth in travel to drive the market for replacement planes and, eventually, growth at its airline customers.

Separately, American Airlines said Tuesday that it reached an agreement with Boeing to defer delivery of 18 Max jets and 19 787s by up to two years. American, a major Boeing customer, made the disclosure while saying it expects to post a first-quarter loss of up to $1.3 billion.