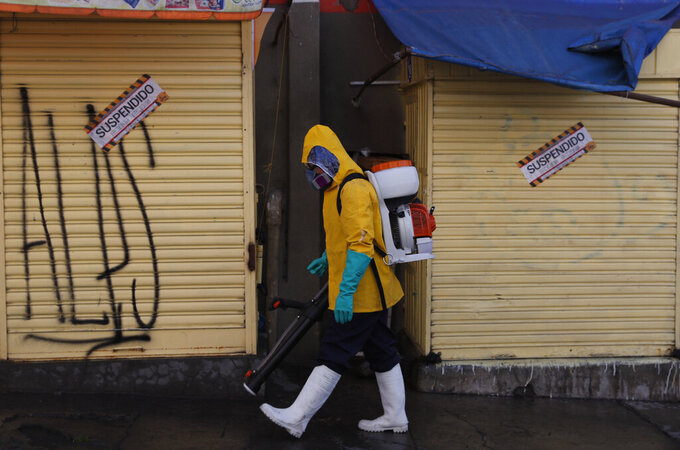 A city worker in full protective gear amid the new coronavirus pandemic disinfects the sidewalk outside the Haiti market in La Paz, Bolivia, Tuesday, June 23, 2020. Health authorities say that a butcher at the marker died several weeks ago of COVID related symptoms, prompting its closure. (AP Photo/Juan Karita)

LA PAZ, Bolivia (AP) — Deserted during months of quarantine, the streets of Bolivia are roiling again with protests that have forced the government into an uncomfortable challenge: trying to resolve the country's long-term political crisis with elections in the middle of a rising pandemic.

If plans hold, Bolivia will conduct presidential elections in September, giving former President Evo Morales' leftist party a chance to return to power after he resigned and fled the country at the end of 2019. The looming vote is increasing political tensions in Bolivia just as the novel coronavirus overwhelms the health system.

The capital, La Paz, and other major cities see demonstrations near daily in defiance of antivirus measures. On Tuesday, teachers protested in La Paz. On Wednesday, health workers marched in Santa Cruz, and the streets of Cochabamba were blocked by a variety of groups decrying the government.

Protesters rarely follow requirements for social distancing and pack closely together unmasked as they shout anti-government slogans. Police presence is at a minimum because much of the force is sick with the coronavirus.

After a year of protests and crises across Latin American and the Caribbean, Bolivia is one of several countries that put politics on hold to grapple with the new coronavirus, and it will be one of the first to attempt a return to some semblance of political normality. The Dominican Republic holds delayed elections on Sunday. Chile put off an April referendum on a new constitution until October, with many predicting further delays.

Bolivia is the country that appears to have the greatest immediate potential for chaos. The country is deeply polarized between Morales' supporters and those who accused him of fraud in October 2019 elections and worked to push him from power after 14 years in office.

Pressured by Morales’ Movement toward Socialism party, which still controls the legislature, and weakened by the pandemic and an accompanying economic crisis, interim President Jeanine Añez accepted elections on Sept. 6.

After a decade of growth under Morales, Bolivia’s economy began to slump and the coronavirus pandemic is expected to cut gross domestic product 5.9% this year, the first recession in four decades.

“We want the government to reactivate the economy," small-business leader Juan Carlos Apaza said during a recent demonstration in La Paz. “Hunger can do more damage than the coronavirus.”

With over 70% of the population in informal day jobs, a 71-day quarantine has pushed many to desperation that's fueling the daily protests.

Other analysts say trying to resolve the political crisis amid a raging epidemic could worsen the country's instability.

Low turnout due to voters fearful of contagion could undercut the legitimacy of the vote, warned Franklin Pareja, a political scientist at the University of San Andrés.

Luis Larrea, president of the Medical College of La Paz, agreed, contending the vote could worsen the disease crisis.

“Holding a vote in the middle of a pandemic is irresponsible on the part of the politicians,'' he said. “Health comes first.''

Bolivia has had more than 32,000 diagnosed cases of the new coronavirus and more than 1,000 deaths, and the numbers are expected to peak around the time of the presidential election.

The country’s weak medical system is already overwhelmed, with intensive-care units full, patients dying in hospital lobbies or at home and protests from under-equipped and under-financed medical workers.

In Cochabamba, a series of coronavirus patients have died in the street for want of hospital beds and funeral homes have declared a crisis because the city's crematorium can only cremate four bodies a day, a third of the current demand.

Morales remains in exile in Argentina and is wanted in Bolivia on charges of sedition, terrorism and electoral fraud, but polls have shown a double-digit lead for his party's candidate, Luis Arce, a former economy minister. Centrist former President Carlos Mesa appears to be in second place, with Añez in third.

The weakened economy, a failing pandemic response and accusations of corruption in the health ministry’s purchase of respirators at triple the world price have damaged her credibility and contributed to her trailing badly.

The latest figures show Arce's lead is likely narrow enough to require a second round of voting and Mesa, who ran against Morales last year, gaining ground.

“The people want answers from those making decisions confronting the pandemic,″ Mesa said.

Morales, a leader of the coca-growers' unions, become the country's first Indigenous president in 2006. His three terms in office coincided with a boom in natural gas and other commodities that allowed him to cut extreme poverty in half, to 17% of the population.

He lost popularity, particularly among the middle class, amid corruption scandals and his desire to seek a fourth term amid a political battle over term limits.

“Clean and transparent elections will be the way forward that the country needs,″ said María Teresa Zegada, a political scientist at the University of San Simón. “Afterward, we’ll need to leave confrontation behind and reach political consensus that will allow the new administration to govern.”