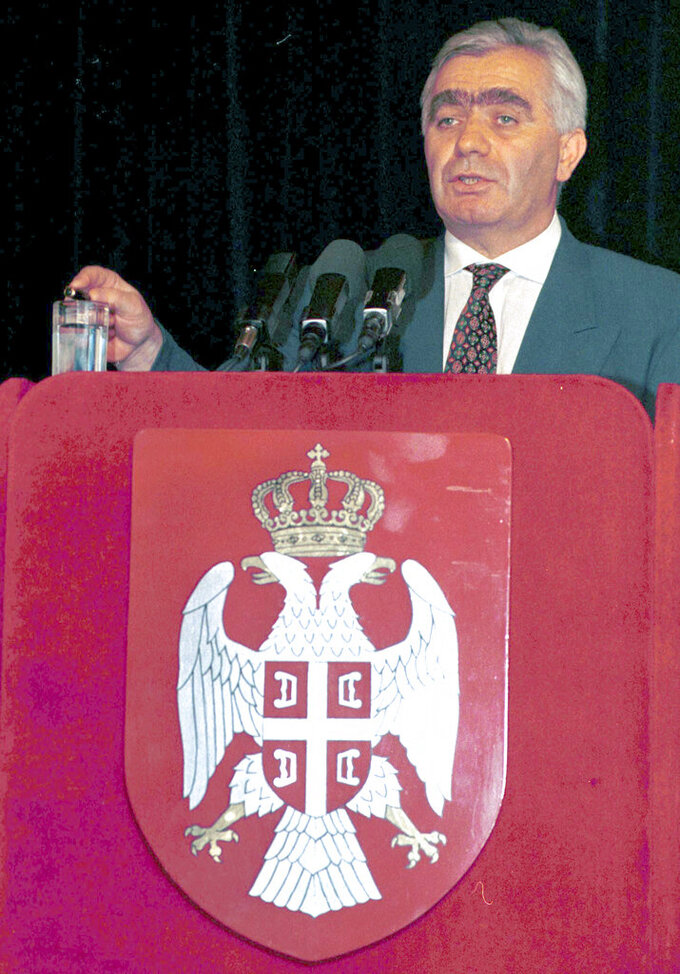 FILE - In this July 1997 file photo, Momcilo Krajisnik, Serb member of Bosnian Presidency addresses during Bosnian Serb Assembly session at Mt. Jahorina, near Sarajevo, Bosnia. The hospital in the northern Bosnian town of Banja Luka said Monday, Sept. 14, 2020, that Krajisnik, a former top wartime Bosnian Serb official who was convicted of war crimes by a U.N. court, died after contracting the new coronavirus. He was 75. (AP Photo/Darko Vojinovic, File) 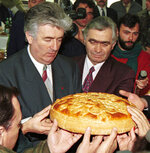 PALE, Bosnia-Herzegovina (AP) — Momcilo Krajisnik, a former top wartime Bosnian Serb official who was convicted of war crimes by a U.N. court, has died after contracting COVID-19. He was 75.

The hospital in the northern Bosnian town of Banja Luka said that Krajisnik died early Tuesday “from consequences of infection with the new coronavirus.”

Krajisnik was convicted and sentenced to 20 years in prison by the U.N. Yugoslav war crimes tribunal in The Hague, Netherlands, for persecuting and forcibly expelling non-Serbs during the 1992-95 war.

He was released from a British prison in 2013 after serving two-thirds of the sentence.

Krajisnik served as the Bosnian Serb parliament speaker during the conflict that erupted after the breakup of the Yugoslav federation in the 1990s.

He was among the top Bosnian Serb leadership that led the effort to create a Serb self-styled state in parts of Bosnia and unite it with neighboring Serbia. He was a close aide to Bosnian Serb leader Radovan Karadzic, who was convicted by the Hague tribunal for genocide.

Bosnian Serb forces took control of about one-third of Bosnian territory, expelling Muslims and Croats from their homes and brutally killing thousands.

More than 100,000 people died before the war ended in a U.S.-brokered peace agreement that created Serb and Muslim-Croat entities under a joint government.

Many Serbs consider Krajisnik and other Bosnian Serb wartime officials as heroes despite the U.N. war crimes convictions against them.

Reflecting such sentiments, Milorad Dodik, a top Bosnian Serb politician who is a member of Bosnia's multi-ethnic presidency, described Krajisnik as a “great patriot.”

“Momcilo Krajisnik's name will be written in special letters in the history of our Republic and our nation,” Dodik said in a note of condolence to the family.

In Sarajevo, Bosnia's other two ethnic groups, had a different view.

“Momcilo Krajisnik is one of the biggest criminals in the history of Europe,” said Zeljko Komsic, another member of Bosnia's presidency. “He will be remembered as one of the signatories of a genocidal policy.”

Munira Subasic, who leads a Mothers of Srebrenica group comprising relatives of the more than 8,000 Bosniak men and boys killed in the 1995 massacre in the eastern town, said “I am sorry that he died.”

“He should have lived 100 years with his crime, sleep with the crime and wake up with the crime, with the images of our children always before his eyes,” Subasic said.

Funeral arrangements were not immediately known. Krajisnik is survived by two sons and a daughter.