Bottom up: Bengals & Burrow try to dig out of deepest hole 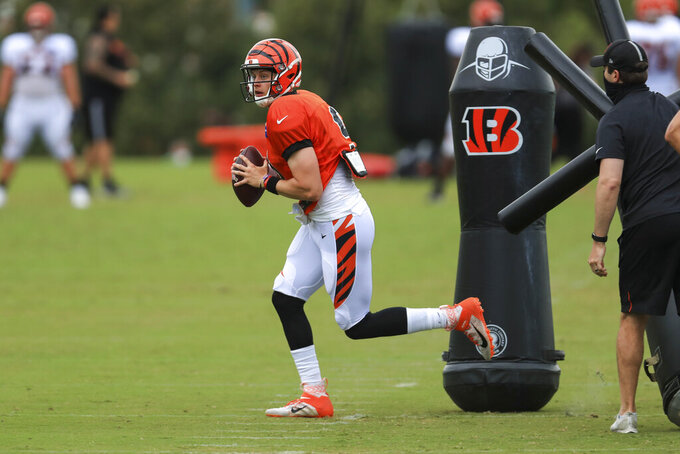 Cincinnati Bengals' Joe Burrow scrambles as he looks to pass in a drill during an NFL football camp practice in Cincinnati, Tuesday, Aug. 18, 2020. (AP Photo/Aaron Doster)

CINCINNATI (AP) — Josh Bynes knew where Joe Burrow was going with the pass during practice. The new Bengals linebacker stepped in front of the intended receiver for an interception and headed down the sideline.

A few moments later, he got a surprise.

The rookie quarterback sought him out to find out why he was able to anticipate the pass and make the interception. Bynes, a nine-year veteran, was taken aback.

Rookies don't usually have the courage to ask such questions.

“Maybe a few vets here and there, but definitely not a rookie quarterback,” Bynes said. “But you can tell he wants to get better. That's what I like about him.”

The learning curve for the Heisman Trophy winner, national champion and first overall draft pick will be the main focus during a season of transition in Cincinnati. The Bengals have a new face for a franchise that's in one of the deepest stretches of futility in NFL history.

So many quarterbacks have passed through town without making a dent in that futility — no playoff win since the 1990 season, the fifth-longest such streak in league history.

Can Burrow get the breakthrough? How long will it take him to get up to speed so he can make an impact as a rookie?

“He's been able to take in the offense,” coach Zac Taylor said. “It hasn't been overwhelming for him. We put a lot on his plate. He asks the right questions.”

Burrow knows the circumstances are stacked against him. He's also aware that with playmakers such as A.J. Green, Tyler Boyd and Joe Mixon, he's got a good starting point.

Now, just watch it play out.

“I feel very comfortable with my guys, and I think we're going to be pretty good on offense,” Burrow said. “I'm excited more than nervous, I'd say.”

Burrow isn't the only one under the microscope. The Bengals went 2-14 in Taylor's first season as head coach, losing a club-record 11 in a row to start the season. Taylor had to put his coaching staff together after the Super Bowl last year, leaving it behind from the outset. Everyone will get a better idea of Taylor's coaching ability the second time around.

It's always tough on rookie quarterbacks, but Burrow has been especially challenged because of COVID-19 precautions. He lost a lot of offseason practice time and won't have any preseason games to get accustomed to the speed of the NFL.

“This is a different offseason and preseason,” Taylor said. “So the communication between (Burrow) and the receivers and the coaching staff and the O-line is more critical than it's ever been. We meet countless hours a day in the quarterback meetings.”

The Bengals kept Green for at least one more year by using the franchise tag on him. The 10-year veteran missed all last season with an ankle injury. He had a hamstring problem early in camp. If Green can be healthy — he's played in only nine games in the past two years because of injuries — he's an important safety net for a rookie quarterback.

“I've got at least four great years left in me — great years,” Green said. “I've always said I want to play 15 years and now I'm like, ‘Maybe I can play more.’ My body feels good.”

The offensive line has been a major problem the past few years. It got a major overhaul in the offseason, with left tackle Cordy Glenn and right guard John Miller released. Jonah Williams moves in at left tackle after missing his rookie season with a shoulder injury. Guard Xavier Su’a-Filo was signed as a free agent. How well they gel will have a lot to do with how much Burrow can succeed his first time around.

The defense finished last in the league in yards allowed in 2018 and 29th overall last season, including last against the run. The Bengals went for an overhaul in free agency, signing safety Vonn Bell, tackle D.J. Reader and cornerback Trae Waynes, who will miss the first part of the season after having surgery for a chest injury.

Melding all the new players is the biggest challenge.