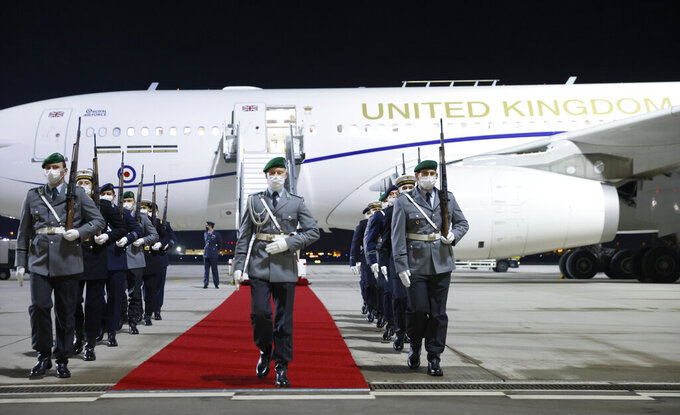 BERLIN (AP) — Prince Charles called Sunday for Britain and Germany to remember their long and close ties, reaffirmed by the nations' reconciliation after two world wars, as the U.K. tries to find its place outside — but also alongside — the European Union.

Charles' appeal during a visit to Berlin to attend Germany’s traditional day of remembrance was part of Britain’s diplomatic outreach to Europe's biggest economy, days before a deadline to strike a post-Brexit deal with the EU.

There is growing anxiety in London that Britain may find itself without favorable access to its biggest trading partner when a transition agreement with the EU expires at the end of the year.

“As our countries begin this new chapter in our long history let us reaffirm reaffirm our bond for the years ahead,” Charles said during a speech at the German parliament. "And let us reflect on all that we have been through together and all that we have learned.”

Wearing masks and the customary remembrance poppy, Charles arrived in Berlin late Saturday on a freshly rebranded U.K. government plane with his wife Camilla, the Duchess of Cornwall. They were welcomed on their first foreign trip since the start of the pandemic by Britain's new ambassador to Berlin, Jill Gallard, who tweeted that the prince was a “true friend of Germany.”

On Sunday, the royal couple were received by German President Frank-Walter Steinmeier and his wife, Elke Buedenbender, at Bellevue Palace. The palace was built in the late 18th century by Prince Augustus Ferdinand of Prussia, to whom Charles is distantly related through his family's German line.

In his speech to the Bundestag, Queen Elizabeth II’s eldest son noted such personal bonds, as well as the close diplomatic, cultural and economic links between the two countries going back centuries, and which were revived after the enmity of World Wars I and II.

“Our people have prospered from one another through commerce since the Hanseatic League established a trading relationship which continues to drive our shared prosperity," Charles said.

“However, the relationship between us has always been so much more than a transaction," he added, citing Germans’ love for Shakespeare and English gardens, and the fixture of German-born composer George Frideric Handel’s music being played at British royal coronations.

“We are heavily invested in each other’s futures, such that our national interests, whilst distinct, will always be entwined," Charles said in German, before switching to English and stating that "Our countries are instinctive problem solvers working together to find innovative and practical solutions to the challenges we see in the world around us.”

Describing the two countries as having a “natural position of allies and friends,” Charles drew on English poet John Donne's words that “no man is an island” to argue that “one might equally submit that no country is really an island either, other than in the wholly literal sense” — a clear reference to Britain's insular geography.

"Our histories bind us tightly together and our destinies, although each our own to forge, are interdependent to a considerable degree,” he said.

The heir apparent, who has visited Germany more than 30 times since 1962, said that while Britain “has chosen a future outside the European Union and the relationship between our countries is evolving, once again,” he believed the two countries “will always be friends, partners and allies.”

The ceremony in parliament included a rendition of Beethoven's Ninth Symphony, the "Ode to Joy," which is the official anthem of the EU and also the 47-nation Council of Europe that Britain remains a member of.

Earlier Sunday, Charles and Camilla observed the traditional wreath laying ceremony at Berlin's Neue Wache. Originally designed as a site to commemorate those who died in the Napoleonic Wars, it is now Germany's Central Memorial for the Victims of War and Tyranny.

Steinmeier, who was Germany's foreign minister when Britain held a referendum on Brexit in 2016 before assuming the largely ceremonial role as head of state a year later, has in the past dismissed British Prime Minister Boris Johnson's efforts to renegotiate existing agreements with the EU.

Charles, 72, was exempt due to the diplomatic nature of his trip from Germany's rules requiring him to go into quarantine on arrival from Britain. The prince has himself recovered from a coronavirus infection in March.