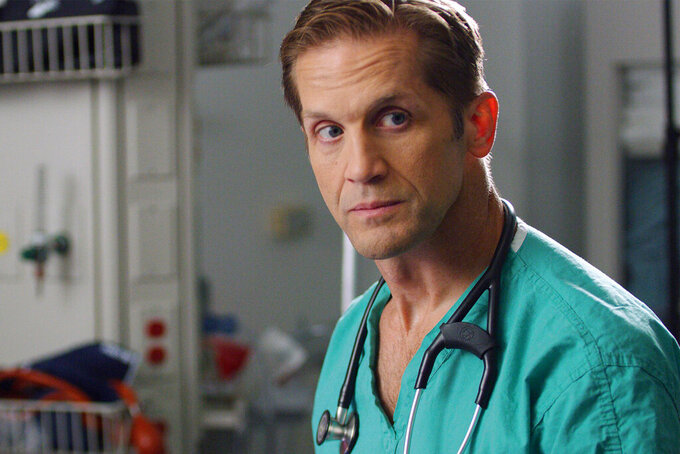 Republican Rich McCormick, shown in an undated file photo is running for a U.S. House seat representing suburban Atlanta’s 7th Congressional District. He debated Tuesday with his general election opponent, Democrat Carolyn Bourdeaux, as both vie for an open seat that includes parts of Gwinnett and Forsyth counties. (Atlanta Journal-Constitution via AP, File)

SUWANEE, Ga. (AP) — Even after gaining 41 seats in the U.S. House in 2018, Democrats believe there are chances to pick up more this year, including in the fast-growing suburbs northeast of Atlanta that make up Georgia's 7th Congressional District.

College professor Carolyn Bourdeaux almost stunned Republican incumbent Rob Woodall two years ago, losing by fewer than 500 votes. Bourdeaux is back for another run at the seat, but with Woodall stepping down, this time she has a new opponent who is trying to hold the seat for the GOP: Republican physician and former Marine Rich McCormick.

Covering parts of Gwinnett and Forsyth counties, the 7th District is filled with mushrooming subdivisions, shopping centers and office parks, as well as knotty traffic jams and growing schools. But it's also a fast-changing district, with the share of white non-Hispanic residents falling to less than 45%. The remainder is split between Black, Asian, Hispanic and mixed-race residents, according to Census Bureau estimates. That, combined with Republican weaknesses among college-educated women who used to be reliable GOP voters, means the territory has been transformed.

“There's been a real shift to the Democrats since 2016,” said Kerwin Swint, a political science professor at Kennesaw State University. “Gwinnett County is a great example because of the increasing diversification."

As it was two years ago, expanded access to health care remains the centerpiece of the campaign by Bourdeaux, a public policy professor at Georgia State University who was a former budget director for the Georgia state Senate. She wants to reform the current Affordable Care Act and provide a publicly sponsored insurance option, saying during a recent debate that too many people pay “extortionary” rates for health insurance.

She's combined that emphasis with attacks on how Republicans have handled COVID-19, trying to turn McCormick's potential strength as a physician into a weakness, pointing to McCormick's appearances in public without a mask and past statements predicting a quick decrease in virus prevalence.

“Rich, on numerous occasions you have downplayed this virus," Bourdeaux told him during an Atlanta Press Club debate on Oct. 13.

McCormick denies ignoring the seriousness of the virus, saying he's put himself at risk as he has continued to work in the emergency room throughout the campaign. But he clearly favors Georgia’s current strategy of relatively few restrictions, with all businesses free to operate at some level.

On health care, McCormick favors a Republican solution of less regulation and encouraging people to shop by price. He said he deplores the consolidation of hospital ownership and has pushed for an end to “surprise” billing, where insured consumers get unforeseen bills, the issue McCormick says got him into politics.

“If you want to drive the health care prices down, you have to create competition,” McCormick said.

Overall, though, McCormick's emphasis is on lower taxes and less regulation, a belief in the dynamism of the American economy that he hopes will appeal to immigrants who have prospered in the district.

“I believe the Republican party is the best hope for minorities and immigrants to break out from poverty,” McCormick said.

McCormick said he wants a path to citizenship for immigrants who “follow the law," but supports a program where local police agencies partner with the federal government to arrest people in the country without legal permission, saying it takes criminals off the street. Bourdeaux opposes that policy, saying it breeds fear of police in immigrant communities and makes the district less safe because people then won't call the authorities when they see crime.

In another way that the district has changed, Bourdeaux has a financial edge on McCormick, outraising him and having $911,000 in the bank on Sept. 30 compared McCormick's $689,000. McCormick's free-market beliefs have won support from the conservative Super PAC Club for Growth Action, which has spent nearly $1.5 million opposing Bourdeaux and another $930,000 boosting McCormick. But that support is outweighed by the $2.8 million that the Democratic Congressional Campaign Committee has spent opposing McCormick.