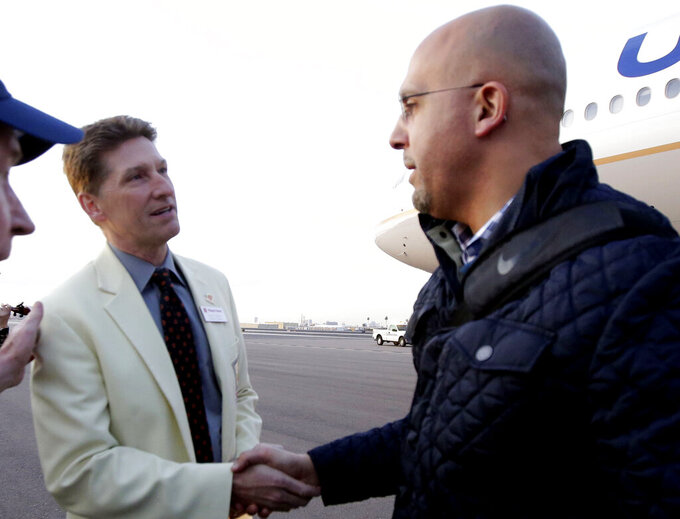 FILE - In this Dec. 23, 2017, file photo, Penn State head coach James Franklin, right, is greeted by Fiesta Bowl executive director Mike Nealy in preparation for an upcoming NCAA college football bowl game against Washington in Phoenix. Nealy and the Fiesta Bowl organizing committee faced unique challenges this year running two games. The Fiesta Bowl, one of the New Year's Six bowl games, went off as planned but the Guaranteed Rate Bowl, which was scheduled for Dec. 26, 2020, was canceled after there weren't enough teams to fill all of the bowl spots. (AP Photo/Rick Scuteri, File)

LOS ANGELES (AP) — Even after canceling the Tournament of Roses parade during the summer and scaling back the pregame festivities normally associated with the Rose Bowl, David Eads and his staff were still preparing for a College Football Playoff semifinal on New Year’s Day to be played at the picturesque stadium in Pasadena, California.

That was until the day before the CFP pairings were announced and the game was moved to Dallas due to the coronavirus pandemic.

Even though the Rose Bowl was still played at another location for the first time since 1942, the ever-evolving changes highlight what was an extremely challenging bowl season. Of the 45 bowl games that were scheduled, concluding with Monday’s College Football Playoff championship game, 19 were canceled, including three after the participating teams were announced.

The Rose and New Mexico bowls shared one thing in common — they were played at different sites, both in the Dallas-Fort Worth area.

Nick Carparelli, the executive director of Bowl Season, attributed some of the late cancellations to it being the end of the season.

“The regular season had a lot more flexibility built in to postpone. When it came to the bowls, we were kind of at the end of the line. There really was no solution,” he said.

David Eads, executive director for the Tournament of Roses committee, and his staff had been working with an evolving schedule since April. The annual Tournament of Roses Parade wasn’t held for the first time since 1944 after it was call off in July. Eads said the decision was made during the summer because of the many logistics involved in arranging travel.

The game was a different matter. Media and production areas were mostly set up at the Rose Bowl when the game was moved. Teams were leery of traveling across the country and a waiver that would have allowed players’ families to watch the game in stands was denied.

“We were all set to host the game in Pasadena until it wasn’t feasible anymore. The team did a great job in less than two weeks getting everything to Dallas and putting the game on there,” Eads said.

In a year during which college athletic programs are seeing huge decreases in revenue, the cancellation or relocation of bowl games carried a huge economic impact as well. Eads said the Rose Bowl brings in $200 million to Southern California, including $40 to $60 million to Pasadena.

The Fiesta Bowl committee, which runs two games, averages $175 million in economic impact to the Phoenix area in years when the Fiesta Bowl isn’t one of the CFP semifinal games. Oregon and Iowa State, which played in this year’s game, are known for bringing fervent fan bases, but couldn’t this year due to the reduced capacity.

The Fiesta Bowl also runs the Guaranteed Rate Bowl, but that game was canceled when there were not enough teams to fill available bowl spots. Many schools announced in early December that they would decline invitations so players could celebrate Christmas with their families after a long, stressful season.

“Going into the last weekend of the regular season we are planning on playing. It was a little frustrating but when you step back and see how tough it was for the players and coaches, it speaks to how much they went through and the toll it took to play the season,” said Mike Nealy, the executive director for the Fiesta and Guaranteed Rate bowls.

Nealy and his staff stayed flexible throughout last year. They had to find a new title sponsor for the Phoenix game as well as coming up with new events that would benefit area charities.

Nealy said there still were some companies interested in corporate sponsorships. The Fiesta Bowl also donated $3 million last year to area charities as well as an additional $1 million last March for emergency COVID relief. With some fundraising events having to be canceled, they came up with new ones, including an additional golf tournament.

“We were a pretty strong proponent of focusing on what you can control. We are in a unique situation because we have a New Year’s Six game and operate another one (a mid-level game),” Nealy said. “No one knew in March how hard the impact was going to be. We originally thought we would get through the summer and soon after that the Big Ten and Pac-12 initially said they weren’t going to have a season.”

Tag Garson, Wasserman’s senior vice president of properties, noted some games canceled early because the lost money from empty stadiums would have had a long-term effect on whether some would be able to survive.

“There is an economic equation that bowls were taking into consideration,” he said. “I think the unfortunate part is there is a lot of good that bowl games do, but unfortunately that couldn’t be highlighted as much.”

The canceled bowl games not only had an economic impact on host cities and the charities they benefit, but it also meant lost advertising revenue for the networks that broadcast them. According to Kantar Media, which tracks media spending, $28.86 million was spent by companies on the 2019 games that were not played this bowl season. The total advertising spending on all games during the 2019-20 bowl season was $303.24 million.

Most of that loss revenue would have gone to ESPN. The network, along with ABC, broadcast all but one of the bowl games this season but also had arrangements with all but three of the canceled games. ESPN Events owns and operates 17 games, but nine were canceled.

ESPN declined requests to discuss the financial impact from the truncated bowl season.

“Could not have been a better partner throughout this season. It is important to them just like all of us,” Carparelli said. “I honestly think to look back and second guess what we did over the past six months, everyone did the best they could.”

All the bowls are in the planning mode for the upcoming season. Eads noted that the time they had after the parade was canceled has allowed them to go through all their events and come up with new ideas that they are hoping to utilize over the next 12 months.

A bigger question is whether all 45 games will be back, especially if businesses reassess corporate sponsorships due to the condition of the economy.

“I love bowl games. I’m just concerned about the economics to be sustained with the inventory,” Garson said.

Carparelli said a huge focus for the upcoming year will be for all the bowls to work together, but that some are better equipped than others. Bowl Season was launched as a brand this year to promote the games leading up to the College Football Playoff.

“One of our primary functions is to connect the dots with everyone,” he said. “The entire bowl system feels confident that whatever the future of the playoff is that it will continue to be a part of it.”