Brandon Marshall tries to break the stigma of mental illness 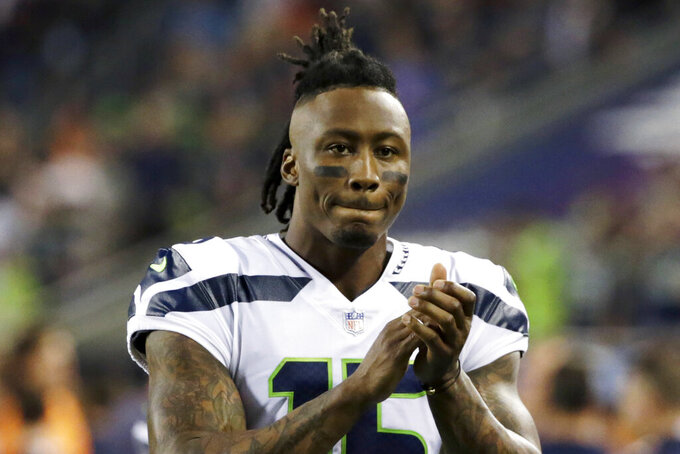 FILE - In this Sept. 17, 2018, file photo, Seattle Seahawks wide receiver Brandon Marshall gestures before the team's NFL football game against the Chicago Bears in Chicago. Marshall’s transition to life after football following the 2018 season has gone smoothly. But none of it would be possible if Marshall hadn’t realized he needed help nearly a decade ago to deal with isolation and bouts of depression. (AP Photo/David Banks, File)

Brandon Marshall caught 970 passes for 12,351 yards and 83 touchdowns, owns an NFL record with 21 receptions in one game and played in six Pro Bowls during a remarkable 13-year career in the NFL.

His proudest accomplishment came when he sought help for mental illness.

“I have to go back to when I first realized that football wasn’t my purpose but that was my platform and that was on the campus of McLean Hospital in 2011,” Marshall said on the AP Pro Football Podcast. “I was diagnosed with borderline personality disorder, and I just had phenomenal experiences learning who I was and just breaking down some of my belief systems. It helped me actually just become better in so many other areas of my life and inspired me to build things that could help people be better.

“So that’s the thing I’m most proud of is the start of that mental health journey on the nonprofit side. You know, it’s cool scoring touchdowns. It’s cool making it to the NFL. That was an amazing journey. But when you are in a position to potentially save a life, that’s a phenomenal experience.”

Marshall’s transition to life after football following the 2018 season has gone smoothly. He launched a podcast called “I Am Athlete” during the coronavirus pandemic with former NFL players Chad Johnson, Fred Taylor and Channing Crowder. He started “House of Athlete,” a Florida-based lifestyle wellness brand. He’s one of four hosts of Showtime’s “Inside the NFL” and recently was named co-host of “First Things First,” a weekday morning show on FS1.

But none of it would be possible if Marshall hadn’t realized he needed help to deal with isolation and depression.

“I didn’t have those skills (to cope) so I had to go to McLean Hospital and join dialectical behavior therapy groups, cognitive behavioral therapy, mentalization, self assessment,” Marshall said. “I started with the clinical evaluation and neurological evaluation to see what I was dealing with, to see if I was capable of change. And for me the journey has been really interesting, really impactful, transformative.

“I just know that everybody deals with something. It affects all of us, because if it isn’t us, it’s our neighbor. It’s just important for us to be able to identify what people may be dealing with. For me, borderline personality disorder presented itself different than the people I was in the same group with. So I’m just thankful that I’m still here today to be able to tell my story and encourage others.”

Marshall wants to break the stigma that men should simply “man up” and “suck it up” when it comes to mental health.

“Real men face things,” he said. “You can’t just face your strengths. You’ve got to face your challenges and your weaknesses. And it’s OK to not be OK. And the best way to come out on the other side is talk to people, ask questions, ask for help.”

“I talk to people when I need to and I also try to stay ahead of it,” he said. “And I think that’s an important part of our routine. We have a routine where we’re taking care of ourselves physically, but at the same time mentally, and being able to deal with stress, especially now there are people dealing with anxiety and depression for the first time ever because of racial tension, because of COVID-19.”

Marshall began his career with Denver in 2006 and played for Miami, Chicago, the New York Jets and Giants and Seattle. He had episodes of volatile behavior early in his career that affected his relationships with coaches, teammates and others before getting his life under control.

“It was just a lot of a lot of highs and a lot of lows. But I’m just glad that I was able to turn things around halfway through my career and be a guy that people can lean on and depend on,” Marshall said. “My life was a living hell. It was a struggle. But I think the biggest thing for me was what people didn’t see. It was the anxiety that I didn’t even know I was dealing with. It was being uncomfortable in my own skin, going to the gas station 100 degrees outside in Miami, having a hoodie on and and bending down and moving in a way that people won’t recognize me and see me because I didn’t want to sign autographs because I was just uncomfortable. So there’s a lot to it. It was one hell of a journey but now I’m on the other side.”