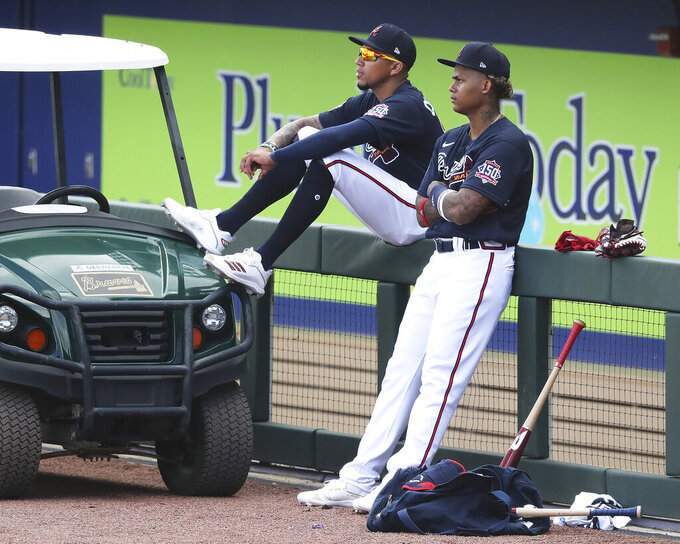 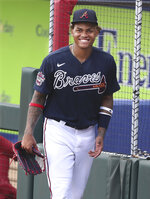 For a 22-year-old rookie who has had only four regular-season at-bats, Cristian Pache has good reason to look comfortable with Atlanta Braves starters in spring training.

Pache already has delivered offensive and defensive highlights on one of the game's biggest stages. Pache unveiled his talents with six starts in center field in Atlanta's NLCS loss to the Los Angeles Dodgers. His second-deck homer and above-the-wall catch were enticing previews of the big plays he might provide as a starter in 2021.

The big-game exposure changed Pache's offseason. Suddenly, he didn't blend in as easily when he returned to his home in the Dominican Republic.

“I think it was a little different,” Pache said Wednesday through a translator. “When I went back home I was recognized a little bit more around town."

The postseason experience was especially valuable after the coronavirus pandemic took away the minor league season. Already this spring, manager Brian Snitker sees evidence of the young outfielder’s growth as a hitter.

“He looks like a different guy now than when he came into camp a year ago,” Snitker said Wednesday.

“Just how his setup and his swing is more consistent, working better than a year ago, is probably the biggest thing,” Snitker said. “He’s cleaned things up offensively."

Pache earned the respect of his teammates with his performance in the postseason spotlight. Third baseman Austin Riley said Pache should receive “huge” benefits from the experience.

“From me speaking from experience of going through it, just such high-intensity games that those are and for him to make some really great plays in the outfield and hitting a home run, I think that only boosted his confidence,” Riley said Thursday.

The Braves’ starting outfield this season likely will include Marcell Ozuna in left field, Acuña in right field and either Pache or Ender Inciarte in center field. Duvall has signed with Miami and Nick Markakis remains a free agent.

Inciarte was left off Atlanta's 2020 postseason roster after hitting only .190 in the regular season. It was the latest sign of Inciarte's offensive decline and leaves Pache the opening to win the starting job.

He was 4 for 22 with a homer and four RBIs in the postseason. He also made a leaping catch above the wall to rob Max Muncy of a home run.

Pache already is regarded as the Braves' best defensive outfielder, even though Inciarte won three consecutive Gold Gloves from 2016-18. Pache's power is still developing and he also has yet to take advantage of his speed.

Fantasy players should take note: There could be more stolen bases in Pache's future.

“He’s not a polished player yet,” Snitker said. “There’s still room to grow. He’s really fast. He’s not a real good base stealer. We’ve encouraged him to run more. I think guys have to want to do that. That’s a state of mind type of thing, I think. A mentality that guys have. He has the speed, I think, to be a guy like that.”

NOTES: Snitker said RHP Mike Soroka remains on schedule in his comeback from surgery to repair a torn right Achilles tendon. “There haven’t been any setbacks and he’s checking all their boxes on a daily basis,” Snitker said. ... IF Jack Mayfield, who was designated for assignment on Wednesday, was traded to the Los Angeles Angels for cash considerations. Mayfield's move cleared a spot for OF Guillermo Heredia, who was claimed off waivers from the New York Mets.