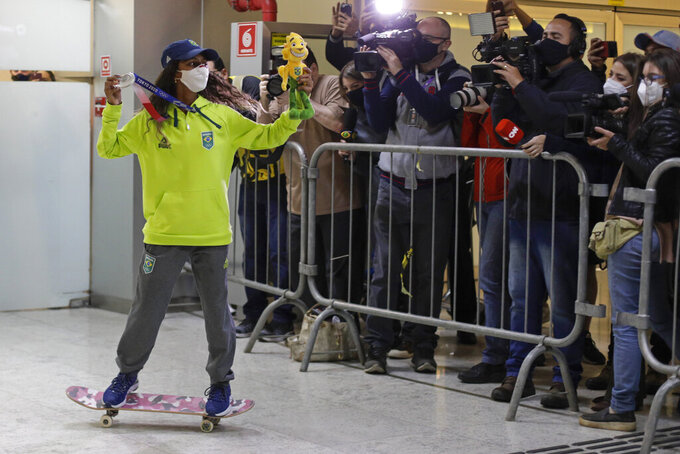 SAO CAETANO DO SUL, Brazil (AP) — No matter how much 9-year-old Brazilian Nicole Amaro pleaded with her dad to let her skateboard, Deivison wasn’t swayed. He was afraid she'd get hurt, and held his ground.

Then, when things seemed hopeless, the impossible happened: Brazil was visited by a fairy.

Nicknamed Fadinha, or “Little Fairy” in Portuguese, 13-year-old Rayssa Leal became an overnight sensation after winning the silver medal in the Olympics’s inaugural skateboarding competition. The board flips, slides and grinds of Brazil’s youngest-ever medalist drew as much acclaim as her braces-filled smile and happy-go-lucky vibe — perhaps best embodied by her shuffling “fairy dance” while waiting to take her final run.

And back home, something magical happened. From Brazil’s posh neighborhoods to its working-class favelas, in skateparks and empty parking lots, a skateboarding frenzy has taken hold.

“My parents were worried, it took time for them to agree. But when they watched the Olympics, they realized it’s a great sport,” Amaro told The Associated Press at a skatepark in Sao Caetano do Sul, a wealthy city in Sao Paulo’s metropolitan region. She was receiving her first two-hour lesson and wobbling on her board – with the blessing of a watchful Deivison. Eight other girls and young women, aged between 4 and 20, also rode around.

Eduardo Braz, a former pro skateboarder who owns the skatepark, said he used to receive messages from one or two girls seeking classes on normal days before the Tokyo Olympics. Now, there are usually 20 reaching out to him, eager to learn.

“We nearly closed because of the pandemic,” Braz said. “Rayssa was a gift. Many girls used to feel a little shy around boys, but now things will be different for them.”

Brazilians were first introduced to Rayssa Leal in 2015, when a video showed the then 7-year-old attempting a heelflip over three stairs while wearing a blue dress. She tumbled twice, but on the third attempt — wearing wings — stuck the landing. American skateboard legend Tony Hawk shared the clip on social media, and what he called her “fairytale heelflip” went viral.

Hawk and Leal have since struck up a bond, and on her social media — where her number of followers has surged into the millions — she affectionately calls him Tio Toninho, or “Little Uncle Tony.” They met up in Tokyo and he joined her while she trained.

Upon her return to Maranhao state in Brazil's poorer northeastern region, she was surprised to find a new mural painted on her school’s walls. It shows her mid-air doing a heelflip, and says “if you can dream, you can make it happen.''

Leal isn’t Brazil’s first female skateboarder, and pioneers – like her own idol, 32-year-old Leticia Bufoni – struggled to break in and gain acceptance. When Bufoni was 10, her dad snapped her board in half in an attempt to put an abrupt end to her hobby.

“I cried for hours,” she said in a press conference after competing in Tokyo. “He thought girls shouldn’t skate, because he had never seen a woman skate before.”

After Leal’s Olympic showing, no Brazilian parent can claim that again.

Professional skateboarder Sandro Dias said interest among girls that was growing before Leal’s medal has since exploded. He has organized a training camp to discover new talent outside Sao Paulo for over a decade and, among 60 participants in each session, there were only ever a couple of girls.

“Then we had 14 girls in the last one, before the Olympics, and we were so impressed. Now I've just stopped counting; there are just too many girls keen to come!” said Dias. Young people “want sports that reflect a lifestyle. And that’s what Rayssa brought.”

The sales of popular sporting goods company Netshoes started skyrocketing hours after Leal won her medal, and on the first full day afterward jumped 80% from the same day the prior week. Its best-selling item? The sneakers Leal wore during her Olympic runs. Sales of starter skateboards have surged, too, according to a spokesperson.

In Rio de Janeiro, Rennan Leta gave his stepdaughter Maria Clara a skateboard for Christmas last year, but she had only used it once. Few places near their home have smooth pavement, so the board collected dust by the washing machine.

Rayssa’s performance in Tokyo reignited the 8-year-old's interest and the next day she set out to find to place to skate so she could “join the little fairy team,” Leta, a 26-year-old coordinator of a nonprofit, told the AP in a message. He filmed Maria Clara skating unsteadily and put it on Twitter, joking that she was training for the 2028 Olympics.

“The 'little fairy' effect is enormous!” he wrote at the time. Two weeks later, she's riding down declines with perfect balance.

Skateboard mania has also reached one of Rio’s most famous favelas, Cidade de Deus, which is dominated by drug traffickers and was made famous by the 2002 film City of God.

It’s a far cry from the well-to-do city where Amaro’s dad is paying for her lessons. But 8-year-old Ana Júlia dos Santos was able to start skateboarding a year ago, thanks to social project CDD Skate Arte, which works to empower children and prevent them from getting mixed up in trouble. Most are girls.

She watched Leal win her medal, and since then has been skating every day.

“I want to be just like Rayssa Leal, the little fairy of skateboarding, and win medals,” dos Santos said, wearing an old black helmet with a pink chinstrap, her only protection.

Dos Santos's mom, Ingrid, told the AP that she has overcome her concern at seeing her daughter wipe out, and now is fully on board.