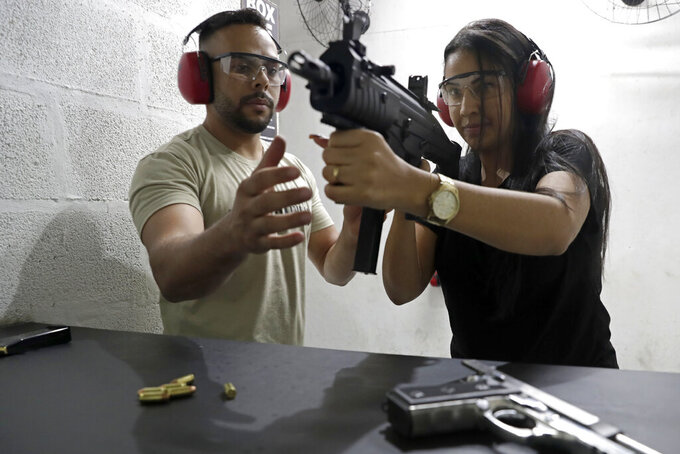 Gisely Nunes learns to handle a submachine gun from an instructor at the Valparaiso Shooting Club on the outskirts of Brasilia, Brazil, Saturday, March 6, 2021. Newly-issued gun decrees, which have worried public security analysts, are to take effect by mid-April unless the Brazilian congress or courts intervene. (AP Photo/Eraldo Peres)

SAO PAULO (AP) — Katia Sastre was walking her 7-year-old to class in Suzano, a violent city near Sao Paulo, when she saw a young man draw a pistol on other parents standing by the school's front door.

Within seconds, she pulled the .38 special she carried in her purse.

The off-duty police officer’s three shots killed the mugger on that morning in May 2018 and kicked off her transformation into a beacon for champions of looser gun control. Security camera footage produced medals, social media star power and a congressional run in the same conservative wave that lifted pro-gun lawmaker Jair Bolsonaro from the fringes to the presidency.

Now a lawmaker herself, she is backing Bolsonaro’s push to deliver a gun to every Brazilian who wants one, and dismisses public security experts’ concerns about the president’s four recently issued gun decrees. They will take effect next month -- unless Congress or courts intervene.

“Brazilians want assurances for self-defense because they feel insecure about criminality,” Sastre told The Associated Press, blaming a 2003 disarmament law for heightened violence and more than 65,000 violent deaths in Brazil in 2017. “The guns used in those killings weren’t in the hands of citizens; they came illegally from traffickers and criminals.”

Sastre is in the minority of Brazilians, almost three-quarters of whom want stricter gun laws, according to the most recent poll. Yet the unpopular proposal is among Bolsonaro’s top priorities for deploying his recently replenished political capital, even in Brazil’s worst throes of the pandemic, with about 1,800 people dying per day.

Anti-gun activists, a former defense minister and high-ranking former police officers, including an ex-national public security secretary, warn the decrees will only add to the body count.

The two decrees causing most controversy would boost the number of guns average Brazilians can own -- to six, from four currently -- and enable them to carry two simultaneously. Policemen, core supporters of the president, could have eight firearms if the decrees stand.

Ilona Szabó, director at the security-focused Igarape Institute in Rio de Janeiro, has pushed back against Bolsonaro’s attempts to get more guns to Brazilians. Nominated to a national security council, she faced a deluge of threats from Bolsonaro devotees and had to flee the country. From abroad, she’s urging lawmakers and the country’s Supreme Court to strike down the measures.

Court justices are expected to rule within weeks on the first of at least 10 challenges to the decrees.

“There is no technical justification for those decrees; it is evident that they make policing harder and could end up favoring criminal organizations,” Szabó said.

The number of deaths from gunshots rose by 6% a year from 1980 to 2003, when the disarmament law passed. After that, the rate fell to 0.9% through 2018, when it was fully implemented, according to government research institute IPEA’s Violence Atlas. That shows fewer guns translates into fewer deaths, Szabó said.

And although homicides increased in the years leading up to 2017, they plunged in 2018 – before any measures to loosen gun control.

Bolsonaro’s pro-gun position was a trademark of his seven terms as a lawmaker. In July 2018, he shocked adversaries by teaching a toddler how to make the finger-gun sign that came to represent his presidential campaign.

When he took office in Jan. 2019, a person could own two guns, but had to submit to an onerous process checking criminal record, employment, psychological and physical fitness, and also write a statement explaining one's need for a weapon.

Decrees from May 2019 allowed rural landowners carry guns across their properties, increased annual ammunition allowances and let registered shooters and hunters transport weapons from their homes to ranges.

Last month, Igarape and the Sou da Paz Institute, which researches violence, said there were almost 1.2 million legal guns in Brazilians’ hands, up 65% from the month before Bolsonaro's term began.

Bolsonaro, a former Army captain who expresses nostalgia for Brazil’s three decades of military rule, has said he wants to arm citizens to prevent a dictatorship from taking hold. He has suggested armed citizens could counter local government restrictions on activity during the pandemic.

“An armed populace will end this game of everybody needs to stay home,” the president said on Christmas Eve.

The decrees also empower local councils of psychologists to grant shooting range members permission to own guns, rather than experts chosen by Brazil’s Federal Police. And they wrest from the Army control over sales of several caliber bullets, which makes them harder to track, and boost annual ammunition allowances by as much as fivefold.

These are welcome prospects to people like Eduardo Barzana, president of a shooting club in Americana, a city in Sao Paulo state’s countryside. Before a practice session, while uncasing semi-automatic assault rifles and preparing his protective glasses, he explained why he cheers Bolsonaro’s moves to loosen controls.

“Guns are like cellphones; it’s the person behind them who matters,” said Barzana. “What the government is doing is benefiting our sport and giving average citizens the right to defend themselves.”

Former public security secretary José Vicente da Silva acknowledges the decrees would help responsible owners, but says they also will facilitate guns falling into the wrong hands. One month after Sastre was sworn in as a lawmaker, students at the school she once attended were targeted in a shooting; the assailants used guns purchased online.

“No one needs six or eight guns for protection, and there’s no evident reason to give so many guns to shooters and hunters,” said da Silva, who retired from Sao Paulo state police after three decades of service. “The decrees make it almost impossible for police to track bullets or weapons. If this goes ahead, we will have weapon stockpiles, many of which bought by organized crime.”

Some analysts have expressed fear that the riot at the U.S. Capitol in January may inspire an armed uprising of Bolsonaro supporters should he fail to win a second term in next year's election.

Bolsonaro's lawmaker son, Eduardo, a fellow die-hard gun rights supporter and former federal police officer, visited the White House on the eve of the riot. He later denied any tie to the invasion.

On March 8, Eduardo Bolsonaro told newspaper O Estado de S.Paulo during a visit to Jerusalem that if rioters in the U.S. had been organized, they would have been able to take the Capitol and make their demands heard, and had “a minimum of bellicose power” to avoid casualties on their side. In 2018, he said it would take just two soldiers to shut down the Supreme Court.

Statements like those prompt Igarape's Szabó and other analysts warn risks for Brazil's democracy are higher than in the U.S..

“This rhetoric of politicization of the issue, with the president saying he will arm citizens against lockdowns or electoral fraud is the Trump model," Szabo said. "We saw what happened at the Capitol invasion, with deaths. It could have been worse.”

In the U.S, gun sales hit a historic high in January after the riot, and continued the record-setting surge that began as the pandemic took hold. Gun sales often spike during election years amid worries a new administration could change gun laws. U.S President Joe Biden has supported gun control measures like a ban on “assault weapons.”

In Brazil, both the speaker of the house and the Senate’s president won their positions last month with Bolsonaro's backing. Congressional analysts say it is unlikely either will cross the president on an issue his base holds so dear. The opposition isn’t strong enough to whip the votes needed to strike down the decrees.

Caravans of Bolsonaro supporters drove the streets of major cities on Sunday. Pictures that went viral on social media showed some holding guns near their car windows.

“We are operating beyond public security here; this is the terrain of politics, which is really serious,” said Raul Jungmann, a former minister of defense and public security. “Arming populations is always done at the service of coups, massacres, genocides and dictatorships.”