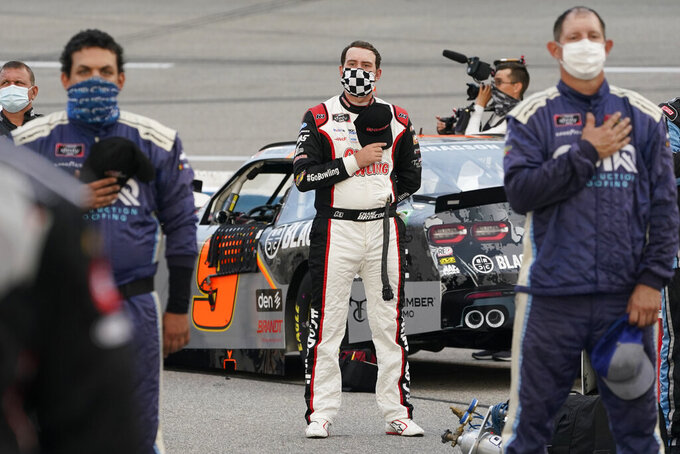 BRISTOL, Tenn. (AP) — The final regular-season race of the Xfinity Series proved to be a preview of the upcoming playoffs as title contenders Chase Briscoe and Austin Cindric dominated yet another event.

Ross Chastain, poised for a probable promotion to the Cup Series with Chip Ganassi Racing, followed Briscoe past Cindric in the waning laps and finished second.

Briscoe is hoping for his own promotion to Cup with Ford and Stewart-Haas Racing, which has just one seat unfilled for 2021. Briscoe started the year chasing eight wins, the number he believes will earn him a Cup ride.

“I told all the guys 'There ain't no way we are getting beat this week,'" Briscoe said. “I finished second here the last two races and I wanted to win it so bad. I can't wait to get these playoffs started, I feel like we are on a really good run.”

Briscoe also acknowledged the spectators at Bristol, just the second Xfinity race since March in which fans were allowed to attend. Bristol planned to admit about 20,000 spectators Friday night and tickets were still available the day before the event. The allotment of 30,000 tickets for Saturday night's Cup race, the first elimination race of the playoffs, have all been purchased.

“I am so thankful we are back with race fans. It’s not the same without you guys," Briscoe said.

Chastain finished second for the fifth time this season — he's been runner-up three times to Briscoe — and lamented not using a bump-and-run on Cindric before Briscoe passed Chastain and executed the successful pass for the win.

“It's tough fighting for everything. I want this so bad. I want to be in this sport and win races," Chastain said. "I know it is second and it's great... there's a lot of things I could do different and I just didn't get it done.”

There was only one open spot in the 12-driver playoff field in the finale and Brandon Brown simply had to hold off Jeremy Clements to claim it. Brown finished 12th for his family-owned team, just an eight-person organization that has raced through the pandemic without owner Jerry Brown.

Jerry Brown, the driver's father, was diagnosed with cancer early in the pandemic has not been able to travel.

“It's a huge relief,” Brown said. “I am just so thrilled that I will be able to go home and call Dad and say ‘Hey, we’re a playoff team.'”

The playoffs begin next week at Las Vegas Motor Speedway and the Xfinity Series will crown its first new champion in three years. Tyler Reddick won back-to-back titles before moving this season to the Cup Series.

Cindric is the top seed and will race amid speculation about his own possible promotion. Team Penske might try to get Cindric into a Cup seat next season and Matt DiBenedetto, who drives for Penske affiliate Wood Brothers Racing, has not had his 2021 option picked up yet. DiBenedetto will try to avoid playoff elimination Saturday night at Bristol.