Brits in Brussels get lucky with their Christmas turkeys 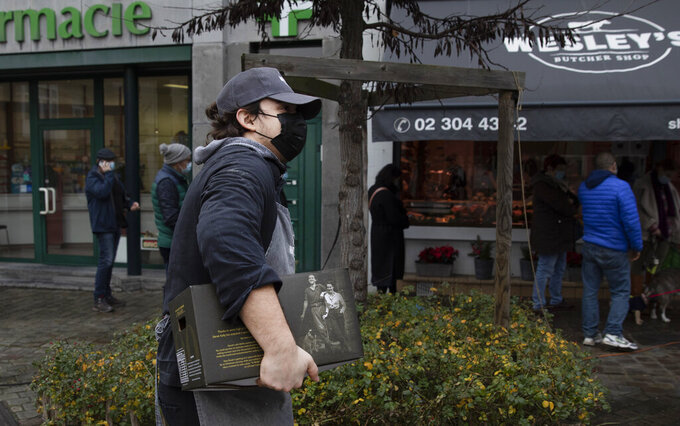 A worker carries a British Kelly Bronze turkey from a refrigerated trailer to Wesley's Butcher Shop in Brussels, Tuesday, Dec. 22, 2020. Wesley's shipment of British turkeys, geese and Irish lambs, meant to fulfill her shops 500 Christmas, orders, managed to cross the English Channel on Sunday, just before the borders were closed. (AP Photo/Virginia Mayo)

BRUSSELS (AP) — While many British citizens face an uncertain Christmas, some worried about the possibility of shortages on shop shelves, due to fears about the spread of the new variant of coronavirus, some Britons in Europe are getting just a little taste of home, even if they can’t get there.

Just a stone’s throw from the European quarter in Brussels, a British butcher has managed to secure a delivery of poultry just in time for Christmas, as many truck drivers were cooling their heels in England after France shut its borders to freight and passenger travel to try to prevent the spread of a new variant of the coronavirus.

Julia Craig-McQuaide, who along with her husband Wesley Morais de Souza owns Wesley’s Butcher Shop, told The Associated Press on Tuesday that they had received around 500 orders, including from a number of British and Irish citizens, and that missing out on this year’s Christmas delivery “would have been a disaster.”

But after a bit of panic when the French trucking company warned her of queues at the U.K. border with France, Craig-McQuaide received her order of 110 turkeys and 35 geese from the United Kingdom on Monday, along with load of Irish lamb and beef included in the shipment.

“We’re incredibly lucky for the food situation,” she said. “I couldn’t possibly get 100 turkeys at short notice and they would have been, you know, not the right type, not the right size.”

With people already struggling through one of the most challenging years of their lives, Craig-McQuaide was worried about the prospect of having to tell her customers that she would not be able to put food on their table during the festive season.

“You have to disappoint all those families when they’re already having, most of them, the Christmas that they didn’t want. They probably want to be at home in Ireland or Britain or France, and they’re stuck here. So, it would not have been a happy email to send,” she said.