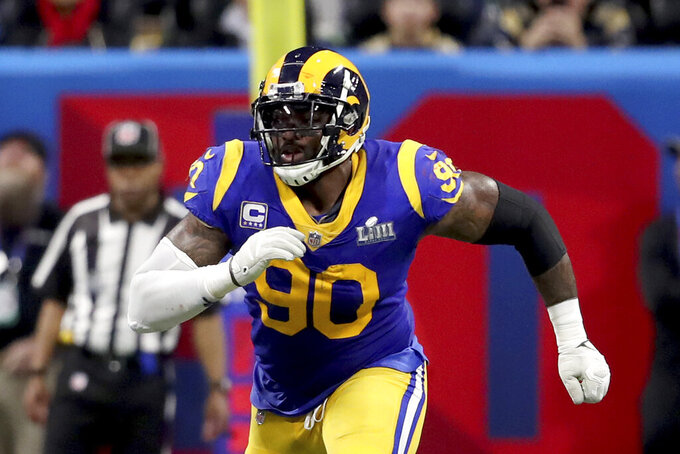 FILE - In this Feb. 3, 2019, file photo, Los Angeles Rams Michael Brockers is shown in action against the New England Patriots during NFL Super Bowl 53 in Atlanta. Brockers is re-signing with the Los Angeles Rams after his free agent deal with the Ravens fell through, apparently because Baltimore's team doctors couldn't examine him properly due to the coronavirus pandemic. Brockers' representatives at Team Sports Agency confirmed the surprising reversal Friday, March 27, 2020. (AP Photo/Gregory Payan, File)

LOS ANGELES (AP) — Michael Brockers began his first trip into free agency with uncertainty and excitement about what might be next in an eight-year NFL career spent entirely with the Los Angeles Rams.

The stalwart defensive tackle ended up grateful for the bizarre twist that sent him back to the Rams after all.

For about 10 days last month, Brockers thought he was joining the Super Bowl-contending Baltimore Ravens on a lucrative three-year contract. But the Ravens couldn't assuage their concerns about his left ankle because of travel restrictions caused by the coronavirus pandemic.

The worries led Baltimore to change its contract offer — and ultimately led Brockers to re-sign with the Rams, who had no such concerns about a player they know well.

“Ultimately, I guess (the Ravens) just took their contract back,” Brockers said in his first public comments on the saga. “They were worried about the past injuries and what the ankle looked like on the MRI. So from there, the (revised) contract that they did offer, it was a lot of insecurity. I wasn’t secure in the contract, so when the opportunity to go to the Rams came back, it was like heaven. I always wanted to be back with the Rams. Always wanted to stay here.”

Brockers and the Ravens' medical personnel couldn't travel to get a comprehensive examination of his ankle, which was badly sprained in the Rams' regular season finale. He underwent exams near his offseason home in Houston, but the Ravens got cold feet about what they saw.

“It was all fine and dandy until the physical,” Brockers said. “Getting an outsourced physical for a team where their doctors don’t really get to look at you, don’t get to put you through some tests that might skew different images that they might have gotten.”

Brockers and his wife had already moved out of their leased home near the Rams' training complex as they resigned themselves to leaving Los Angeles, where they had lived for four years since the Rams' relocation. The Rams are under severe salary cap constraints that forced them to part with several key veterans during the offseason, including starters Cory Littleton and Dante Fowler along with key role players Nickell Robey-Coleman and Marqui Christian.

But the Rams highly valued Brockers, who has started alongside Aaron Donald on the defensive line for Donald's entire six-year career. Their partnership has been an ideal fit for both men, with Donald racking up his jaw-dropping numbers while Brockers largely does the dirty work on the line.

“That's my brother,” Brockers said. “What we’ve built over these six years has been special. ... For me to sit back and tell my kids that I played with one of the greatest three-techs (pass-rushing interior defensive linemen) that ever played football is going to be awesome.”

Donald expressed his disappointment on social media when Brockers agreed to a deal with Baltimore. The two-time AP Defensive Player of the Year was all smiles and jokes online when Brockers found his way back.

“Aaron finally was talking to me again once we got Michael back,” coach Sean McVay said. “He was a little upset with me, I think, for a couple of days.”

The Rams already made plans to replace Brockers after they thought they had lost him. Los Angeles signed defensive tackle A’Shawn Robinson away from Detroit as a free agent, believing the four-year NFL veteran could fill much the same role on its defensive line.

But Los Angeles also paid close attention to Brockers and the Ravens, even after news of the initial deal came out through Brockers' agent.

“We knew early in the game that there might be an issue with Baltimore and Michael and his physical,” Rams general manager Les Snead said. “At that point, I identified him as a bonus baby. Not that Michael’s a baby. ... But long story short, there was a bonus baby out there. Michael has meant a lot to us here with the Rams, and we felt like, OK, is there a way that we can actually bring him back? And now we’re better off on the defensive line than when we started.”

With Baltimore behind him, Brockers realizes he’s in rarefied company with the chance to play a full decade for just one NFL team. He is the longest-tenured player on Los Angeles' defense, and only long snapper Jake McQuaide has spent more seasons with the team among the active Rams.