Brohm trying to make all right calls against Iowa in opener 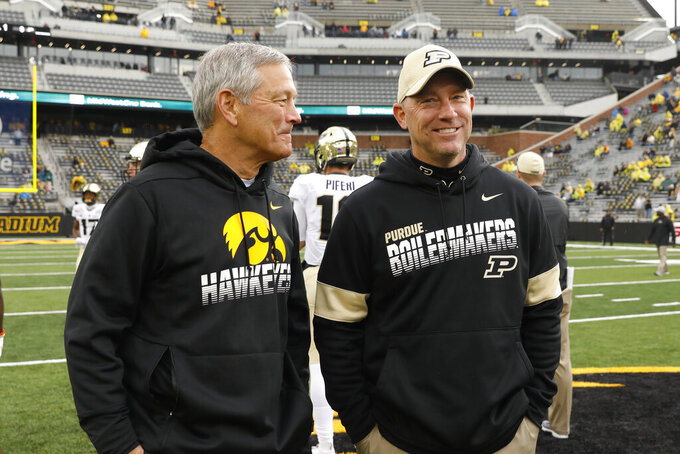 FILE - In this Oct. 19, 2019, file photo, Iowa head coach Kirk Ferentz talks with Purdue head coach Jeff Brohm, right, before an NCAA college football game in Iowa City, Iowa. Purdue offensive coordinator Brian Brohm went through his usual practice routine this week. He met with his older brother, Jeff, about game planning and the initial play-calling script as he prepared for Saturday's long-awaited season opener against Iowa. Less than a week after the Boilermakers fourth-year head coach tested positive for COVID-19 and was forced into isolation for 10 days, it's the other Brohm taking charge this weekend.(AP Photo/Charlie Neibergall, FIle)

He met with his older brother, Jeff, about game planning and the initial play-calling script as he prepared for Saturday's long-awaited season opener against Iowa.

On Saturday, things will change. Less than a week after the Boilermakers' fourth-year head coach tested positive for COVID-19 and was forced into isolation for 10 days, it's the other Brohm taking charge this weekend.

“I’m always going to take into account his thoughts," Brian Brohm said. “The plays I call, the decisions I make will have to come from me, so I'll have to rely on my football experience to make those calls. Leading up to the game, I'll get his input. But when it’s game time, I'll have to put the head coach hat on and make those decisions."

It will be an odd scene.

Kirk Ferentz, the longest-tenured coach in the Football Bowl Subdivision and Iowa's career leader in victories (162), will stand on one sideline at age 65.

On the other will be the 35-year-old Brohm, who has no head coaching experience and hasn't called plays since his final CFL game in 2015. Now, he's attempting to become the first Brohm to win a season opener at Purdue.

After two schedule revisions, the starting and stopping of practices and pushing the Big Ten start date to late October, Ferentz would rather the focus be on football. But he also recognizes Brohm's test results and subsequent absence are a stark reminder about how difficult it could be to navigate this most unusual season.

“Very sorry to hear he got hit by the virus and hoping he has a very quick recovery," Ferentz said. “It’s just a reminder just how real this is. It’s everywhere. Nobody is immune from it, but certainly wish him the best as he moves forward."

The Brohms have decided who will be the starting quarterback this weekend. Purdue's players know, too. Everyone else has been kept in suspense, hoping to gain an advantage on Iowa's traditionally strong defense.

Nobody is dropping hints about the winner yet.

“I think we’ve had a rally good competition in the quarterback room," Brian Brohm said. “They’ve done a good job of competing, coming together and pushing each other on the field. I look forward to seeing them out on the field and letting it fly."

As Petras watched Stanley run the show, he tried to find tidbits that could help him when he got his chance. Now, the sophomore is on the cusp of making his starting debut, and the butterflies are starting to set in.

“I’ll have nerves," Stanley said. “Coach Ferentz puts it well: Anyone who has a heartbeat will have some nerves the first game. Something we talk about here is sleeping through a storm. The captain of the ship that has tied all his knots correctly, when the waters get choppy and the storms are coming, he can sleep through because he’s prepared to the best of his ability."

Purdue receiver Rondale Moore had hoped to follow his freshman All-American season with an even more electric sophomore campaign in which he could have become a Heisman Trophy contender.

But when he missed the final eight games last year with an injured hamstring and announced he would skip his junior season to prepare for the NFL draft following the Big Ten's decision in August, Boilermakers fans thought they had seen the last of Moore.

Instead, the Big Ten reversed course, Moore changed his mind and he will now be lining up Saturday with David Bell, the conference's top freshman last year.

“I think with both of us being out there, we both should have a huge impact — depending which of us gets off first," Bell said. “Him coming back helps me and hopefully, I can help him because he wants to get to the NFL."

On Saturday, he's expected to make start No. 41 in familiar territory — his hometown. Cronk played high school football at nearby Lafayette Central Catholic.