Broncos bringing QBs to KC to face Mahomes and Chiefs 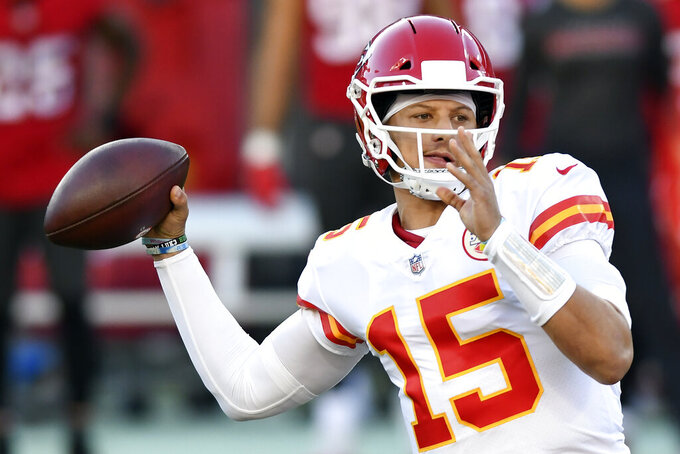 KANSAS CITY, Mo. (AP) — The Chiefs' Patrick Mahomes is putting together one of the best seasons of any quarterback in NFL history.

The Broncos? Well, they're just happy to HAVE a quarterback.

Drew Lock will be back under center when Denver visits Kansas City in the latest edition of their long-simmering AFC West rivalry Sunday night. Lock was deemed a high-risk close contact of infected quarterback Jeff Driskel — along with the rest of the Broncos' quarterbacks — and left his team without a true QB to face New Orleans last week.

The Broncos turned to a practice squad wide receiver to take most of the snaps in a 31-3 rout.

“Watching it, it was a gut-wrenching feeling the whole time. It was tough,” said Lock, who grew up suburban Kansas City and starred at nearby Missouri. “It wasn't something I enjoyed. I'd much rather be out on the field helping my team out. It hurt my heart, hurt my soul, and it's just time to move on and get out there and get to Kansas City.”

Mahomes is coming off another impressive performance, throwing for 462 yards and three touchdowns without a pick in a 27-24 win over Tom Brady and the Buccaneers. He's on pace to throw for 5,087 yards, which would give him his second season among the top 10 in NFL history, along with 44 touchdown passes and just three interceptions. His passer rating of 115.5, while far from the perfect measurement of play, would be the best in his bright young career.

“Mahomes is special, not just this year — ever since he's taken over the starting job in Kansas City, he's had a phenomenal short career,” Broncos coach Vic Fangio said. “He's just really a great, great quarterback, and he especially excels in their system. He's really good at operating their system.”

His cast of cohorts makes it a relatively easy task.

Tyreek Hill has put together three consecutive 100-yard receiving games, and he's caught at least one TD pass in five straight, highlighted by a 269-yard effort with three scores against Tampa Bay. Tight end Travis Kelce is riding a streak of 106 games with at least one catch and needs a mere 22 yards receiving to reach 1,000 for the fifth straight year.

Throw in the recent return of Sammy Watkins from a hamstring injury, fellow wide receivers Mecole Hardman and Demarcus Robinson, and running backs Clyde Edwards-Helaire and LeVeon Bell, and you have a seemingly unstoppable offense.

As if it needed any more help.

“The guys believe in me just as much as I believe in him. You have to have that if you want to win these football teams against these great opponents,” Mahomes said. “You have to have total confidence in each other to know we're going to give whatever we have in order to win the game, no what what that is.”

Lock will start the 14th game of his NFL career after missing his 14th game last week. Lock and his backup, Brett Rypien, returned to practice Wednesday, but the Broncos isolated practice squad veteran Blake Bortles as a precaution. They added Kyle Shurmur, the Chiefs’ former practice squad QB and son of Broncos offensive coordinator Pat Shurmur, in case any of the Broncos’ quarterbacks tested positive for the coronavirus.

“Drew's going to be motivated,” Broncos tight end Noah Fant said. “I’m expecting him to come out and do good things.”

The Chiefs can clinch a playoff berth with a win, losses by the Raiders, Ravens and Colts or a handful of other results in which they tie. More importantly, they can clinch their fifth consecutive AFC West title with a win and Raiders loss or tie, or if they tie and the Raiders lose to the winless Jets.

The Broncos will face Hill and Co. without their best cornerback. Bryce Callahan was placed on injured reserve with a foot injury Wednesday. Rookie cornerback Essang Bassey is in line to start opposite A.J. Bouye in the secondary.

The Chiefs remain a game behind the unbeaten Steelers for the No. 1 seed in the AFC playoffs, which takes on even more importance this season with a lone first-round bye. But that doesn't mean the Chiefs are watching the standings quite yet.

“I let the coaches take care of who we play and how we play,” Watkins said. “We just control what we control.”

After a couple of shaky performances against Carolina and Las Vegas, the Chiefs' defense had one of its best games of the season against Tampa Bay. It picked off Brady twice and held the Buccaneers until some mop-up points late in the game.

“They do a great job of bringing pressures,” Lock said. “All defenses do, but it just so happens the Chiefs do it really well.”