Broncos get practice for opener in empty stadium scrimmage 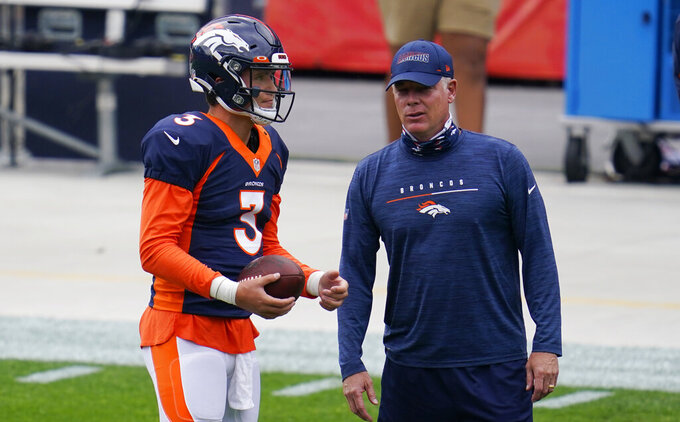 DENVER (AP) — The Denver Broncos got a taste Saturday of what their season opener will be like when they scrimmaged at an empty Empower Field with crowd noise piped in.

“Yeah, it was really weird, without a doubt,” quarterback Drew Lock said. “It sounds like there’s fans here and you look up and there’s no one behind anyone on the sideline.”

The Broncos cranked up the noise when their starting offensive and defensive units were squaring off, so there was one time when Lock had to cover the ear holes on his helmet to hear the play call, just like he has to at Arrowhead Stadium.

“We’d rather have real fans there obviously, but it’s something we have to adjust to,” Lock said. “I know we’re going to come back and do a night practice here and simulate Monday night, so we’ve just got to keep ... getting used to the crowd noise, maybe play it at practice and just keep figuring that out.”

About half of the NFL’s teams aren’t allowing any spectators on opening weekend because of the coronavirus pandemic but are planning to pipe in noise to simulate a crowd. Saturday’s scrimmage on a cloudy and misty afternoon provided a sort of dress rehearsal, one that was especially important given that the entire preseason was wiped out by the pandemic.

Aside from the artificial crowd cheers, the only sounds in the stadium other than whistles and shouting on the field were the public address announcer calling out down and distance and some music tracks starting with Ozzy Ozbourne’s “Crazy Train.”

Glasgow hurt his right ankle on the opening series and limped off. Coach Vic Fangio said he had no update on the severity of the injury.

Chubb tweaked his surgically repaired left knee shortly afterward and the medical staff removed his knee brace. He walked around the bench and returned to the sideline with a wrap on his knee after halftime.

“Bradley just didn’t feel right out there, so precautionary, we took him out,” Fangio said.

Denver Mayor Michael Hancock addressed the team afterward, thanking them for their community work. The Broncos canceled practice Thursday to discuss ways they could help the community in light of the unrest in Kenosha, Wisconsin, followed the police shooting of a Black man and a white teenager gunning down three potestors.

Fangio said he’ll have another scrimmage at the stadium, next time at night, as the Broncos get ready for their opener against the Tennessee Titans on Monday night, Sept. 14.