Broncos' Gordon sorry for DUI, focuses on game vs. Chargers 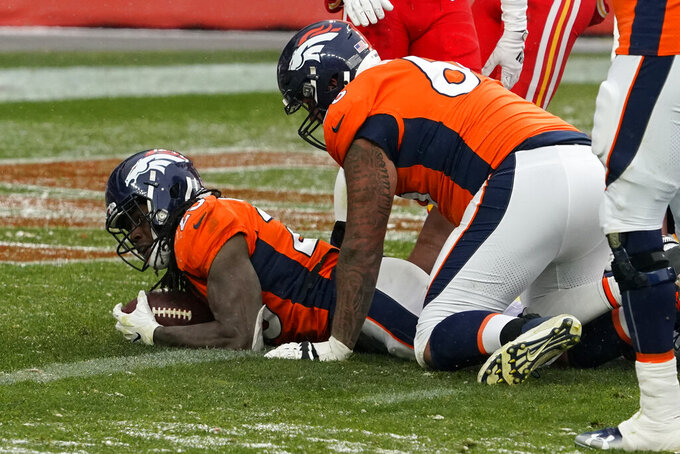 Denver Broncos running back Melvin Gordon, left, scores a touchdown during the second half of an NFL football game against the Kansas City Chiefs, Sunday, Oct. 25, 2020, in Denver. (AP Photo/Jack Dempsey)

ENGLEWOOD, Colo. (AP) — Running back Melvin Gordon III apologized Wednesday for an Oct. 13 drunken driving arrest in his first public comments since getting pulled over for speeding after a night out in downtown Denver.

“I am sorry I was even in that situation,” Gordon said in a video call with reporters, adding that he kept silent about his arrest until now for legal reasons, not ambivalence.

“I try to do my best to walk a straight line and lead by example. So, I’m a little upset that I put myself in that situation,” Gordon said. “I had a hard time just dealing with it myself. Like I said, never been in trouble before so it was tough.

“But just to the people of Denver and everyone, I don’t want anyone to feel like I just don’t care, like, ‘He got his money, he don’t care.’ I do. I do. And I’m not happy that I was in that situation.”

Gordon faces a possible three-game suspension from the NFL over his DUI arrest, something he said he wasn’t concerned about as he prepares to face his former team, the Los Angeles Chargers (2-5), on Sunday.

Gordon, who signed a two-year, $16 million free agent contract last offseason, missed Denver’s win at New England following his arrest because he had strep throat. He returned to action Sunday when he fumbled twice in the Broncos’ 43-16 loss to Kansas City that left them at 2-4.

“It’s kind of unfortunate that I got sick the New England game and had to sit out and was shaking some of the rust off I like in a sense the last game,” Gordon said.

Gordon leads the team in rushing yards (349) and touchdowns (five) but also in fumbles (three), which give him 17 in 72 career games.

“The guy who fumbles feels the worst in the whole stadium — in the whole world at that point in time,” Gordon said. “But that’s what happens when you go out there and try to make a play. I’m dying to make a play in a sense. I’m trying to help this team win and I’ll do whatever it takes. I’m a competitor and you know sometimes when you’ve got three or four guys on you, you’ve got to be smart and go down. You can’t take (on) the whole team."

Denver’s other running back, Phillip Lindsay, has zero fumbles in 34 career games, but he left before halftime Sunday with a concussion after gaining 79 yards on just nine carries.

Lindsay has missed three games and come out of two others before halftime because of injuries.

Lindsay is in concussion protocol and on Wednesday was on a side field watching other injured players go through conditioning drills. It would seem a long shot for him to progress through the conditioning, non-contact and practice phases for him to be able to play on Sunday.

That leaves Gordon with a leading role to play against the team that drafted him 15th overall out of Wisconsin in 2015.

“I’m just going to take it like I do every week,” Gordon said. “You know, obviously it’s going to be cool to go up against some of the guys that I built a great relationship with over the years. But you know it’s no different than any other team. I’m going to prepare the exact same way and go out there and try to get this W.”

Gordon’s position coach, Curtis Modkins, returned to practice Wednesday after recovering from a bout with the novel coronavirus, but offensive line coach Mike Munchak was absent as he dealt with COVID-19. Coach Vic Fangio declined to say whether Munchak or somebody close to him had contracted the virus.

Gordon said Modkins was able to continue coaching the running backs through videoconference and he figured Munchak would do the same with the O-linemen.

“It’s just adversity,” Gordon said. “It’s adversity and you have to be able to deal with it.”

Asked if it was jarring to hear news this week that 23-year-old Jaguars running back Ryquell Armstead would miss the remainder of the season after being hospitalized twice with respiratory issues from a serious case of COVID-19, Gordon said, “It’s tough to hear of anyone going through COVID.”

“I mean, it’s a terrible disease. A lot of people have lost a lot of loved ones because of this, so just hearing anybody going through that” is tough, Gordon said. “It’s not just because he’s a football player and he’s a young player, it’s just regular people out there that are going through that and you hear about that all the time.

“It sucks to see it and it sucks to hear it, but it’s just something that we have to go through right now that I hope we can overcome as a country and figure something out.”