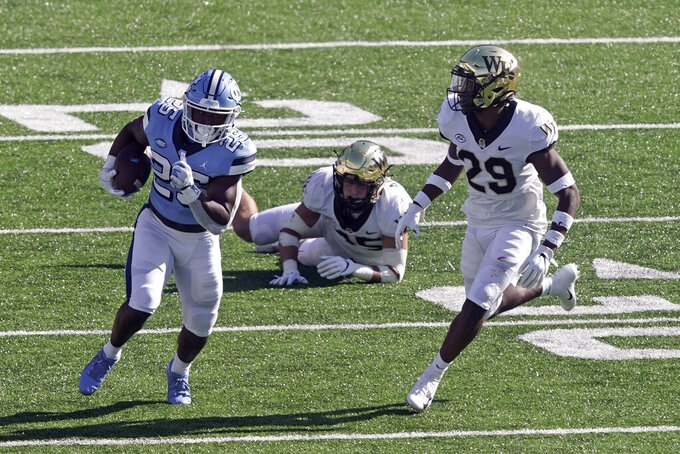 FILE - In this Nov. 14, 2020, file photo, North Carolina running back Javonte Williams (25) runs while Wake Forest defensive back Caelen Carson (29) chases during the first half of an NCAA college football game in Chapel Hill, N.C. The Denver Broncos traded up in the second round of the NFL draft Friday, April 30, 2021, to grab Williams with the 35th overall pick. (AP Photo/Gerry Broome, File)

ENGLEWOOD, Colo. (AP) — George Paton beefed up Denver's offensive backfield and O-line on the second day of the draft by adding a bruising running back and a big-time, small-school guard nicknamed “The Gut."

The Broncos' new general manager also added a versatile linebacker in Ohio State's Baron Browning with the final pick of the third round Friday night.

Paton traded up in the second round and grabbed North Carolina running back Javonte Williams with the 35th overall pick.

After moving back twice in the third round, Paton selected O-lineman Quinn Meinerz of Wisconsin-Whitewater with the 98th selection, seven spots ahead of Browning.

“It’s been an amazing process,” Meinerz said. “To be Division III, have my season canceled. … To be able to climb up the boards like I did, it doesn’t happen very often.”

Meinerz, nicknamed “ The Gut ” for his propensity to stick out his belly on hot days, didn't play in 2020 because his Division III school's season was canceled by the coronavirus pandemic.

He worked out in Canada's great outdoors in the meantime, dropped 20 pounds and was the hit of the Senior Bowl.

Coach Vic Fangio said Meinerz will play both guard and center in Denver.

“Yeah, the challenge was obviously, they didn't have football this year at Whitewater, so you had to go back to 2019 when he was 20 pounds heavier,” Paton said. "And he had a neckroll. He kind of looked like a hunchback on tape. He dominated the competition but the competition was like Vic's size.

“It was hard to evaluate until he went to the Senior Bowl, and he lost 20 pounds, he's in shape and he fared well against elite competition."

Browning also brings versatility to the Broncos with his ability to play inside or outside and can drop back in coverage.

They won't need him kicking, but they can use him everywhere else.

The Broncos entered Round 2 with the 40th overall selection. They gave up their fourth-round pick (No. 114) to the Falcons to move up five spots.

That leaves Denver with a half-dozen picks Saturday.

Williams was the third runner to come off the board after Najee Harris of Alabama and Travis Etienne from Clemson were selected in the first round.

“I definitely feel like I was the best running back in the draft,” Williams said. “Having to sit through the entire first round yesterday was hard for me.”

NFL media analyst Daniel Jeremiah said Williams “could emerge as the best running back in the 2021 class.”

The Broncos recently let Phillip Lindsay go to the Houston Texans after he struggled in 2020 to provide a solid 1-2 punch with starter Melvin Gordon.

“I want to compete all the time. It’s the linebacker in me, too,” he said. “It’s mainly me wanting to compete and win my one-on-one battles. If I see someone in front of me, I want to go through them or make them miss in some sort of way.”

The elder Surtain played in Miami two decades ago when Paton was beginning his NFL career with the Dolphins.

Paton indicated that he had hoped all along to select Surtain even as most mock drafts had the Broncos grabbing a quarterback in the first round.

“We’ve been watching this kid for three years," Paton said. “I knew the family; I knew the dad and I knew where he came from. We tried to hide our interest a little bit. I never spoke with Pat. I never Zoomed with him. I told our coaches don’t call him. I told our scouts don’t call, don’t Zoom. I didn’t go to the Alabama pro day.”

It was all by design to catch everyone by surprise, which certainly worked.