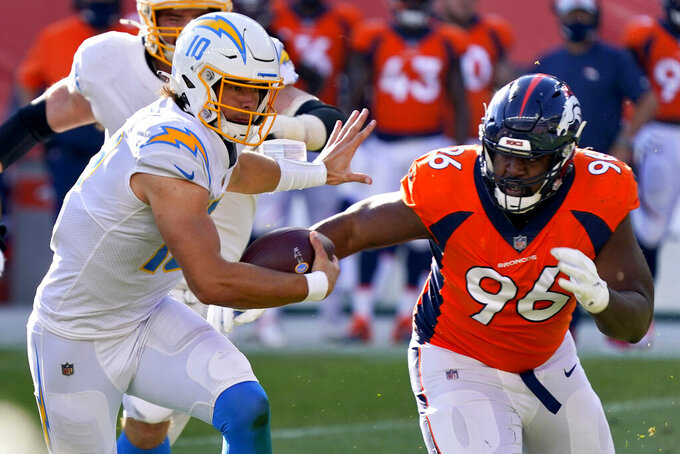 FILE - Los Angeles Chargers quarterback Justin Herbert (10) runs as Denver Broncos defensive end Shelby Harris (96) pursues during the first half of an NFL football game in Denver, in this Sunday, Nov. 1, 2020, file photo. After missing the past four games because of COVID-19, Harris will return to the Broncos lineup Sunday evening when Denver travels to Kansas City to face the Chiefs. (AP Photo/David Zalubowski, File)

ENGLEWOOD, Colo. (AP) — Shelby Harris removed his mask and flashed that mile-wide smile that’s been missing around the Denver Broncos for a month.

“I’m telling you, that stuff was just crazy,” the affable defensive end said on a videoconference Friday about his family’s fight with the coronavirus, which swept through his household in November, sickening his pregnant wife and three young kids and sidelining him for four games.

Harris came off the reserve/COVID-19 list this week along with Denver’s three healthy quarterbacks who were quarantined last weekend for exposure to the coronavirus.

Coach Vic Fangio said that barring any setbacks, Harris will return to action Sunday night at Kansas City but will be part of a rotation because he’s still regaining his stamina.

Harris was initially sidelined for COVID-19 exposure (to family members who contracted the virus) and he spent a week isolated in a hotel to keep him and his teammates safe.

Harris said it was hard being away from his sick family, particularly because his wife’s pregnancy prevented her from taking some of the recommended drug treatments. “There was a lot of concern for her and the baby and just making sure they were OK.”

While hard on Harris, that precaution might have averted an outbreak amongst his teammates because he tested positive after the team returned from Atlanta on Nov. 8.

“I was lucky because I wasn’t really that sick,” Harris said. “I was able to help out a lot more than usual. There’s one thing I really want to say, and this is the most important thing — the time I had off the last four weeks is some of the best time I’ve had in my life. The time I had with my family and my kids, that time is irreplaceable."

Harris said he didn’t get hit as hard as his wife did by the virus and he was bothered more by the aftereffects, such as “weird nerve pains,” than the initial symptoms of chills and cold sweats.

“I just didn’t feel right,” Harris said. “It was just weird. It was the weird nerve pain. For me, that was crazy. The only reason I say all this stuff is because we don’t know much about COVID. We need to be open about the experiences we have because more than likely people have been going through things that they may not realize are associated with COVID."

Harris and defensive coordinator Ed Donatell, who was hospitalized with respiratory issues last month, are the Broncos who were hit hardest by the coronavirus that has sidelined 11 players (including three for exposure), three assistant coaches and two executives.

Donatell is back to work on a part-time basis and went onto the field during practice Friday, when several defensive backs greeted him with fist bumps. Fangio said he's not sure if Donatell will accompany the team to Kansas City. If he does, he'll be in the box, not on the sideline.

The Broncos had to turn to rookie receiver Kendall Hinton last weekend after Drew Lock, Brett Rypien and Blake Bortles were classified as high-risk close contacts of No. 3 QB Jeff Driskel, who tested positive on Thanksgiving. The four had spent time together without their masks last week.

They were trounced 31-3 by the Saints when Hinton completed just one pass and threw two interceptions in a debacle that forced the Broncos and a handful of other teams to isolate a down-the-depth-chart QB going forward as a precaution.

“Kendall did a great job," Harris said. "To have no practice and go out there and play a game at quarterback in the NFL after not playing quarterback for a couple of years, that still blows my mind.”

Harris signed a one-year $3 million contract last spring to return to Denver after finding no takers in free agency. Fangio suggests the six-year pro was having his best season yet when he got sick.

It included a September that featured a blocked field goal in the opener, a forced fumble a week later and two sacks of Tom Brady after that. In October, he broke up two Cam Newton passes in Denver’s rare win at New England and he tied a career high with six tackles in his last game, against the Chargers, on Nov. 1.

“I don’t think he’ll be able to be back to that fully this week," Fangio said. "He had at least a month of inactivity there. So, we’re going to have to watch him rep-wise, but we’re thrilled to get him back.”