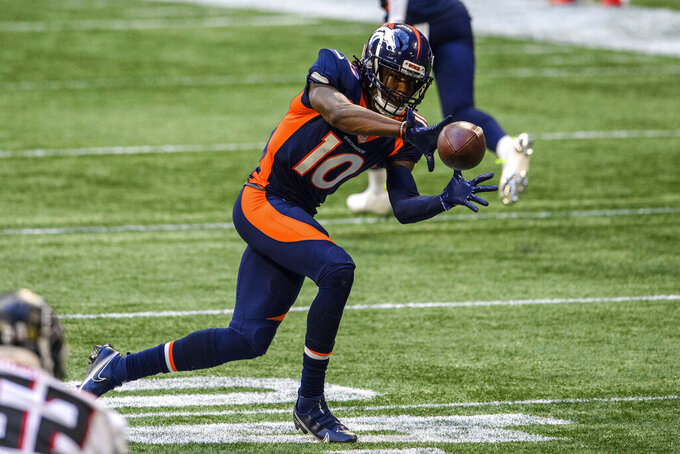 File-This Nov.8, 2020, file photo shows Denver Broncos wide receiver Jerry Jeudy (10) catching a pass during the second half of an NFL football game against the Atlanta Falcons, in Atlanta. The Broncos see an upside to rookie receiver Jeudy's frustrations that have seeped into snarky comments on social media. (AP Photo/Danny Karnik, File)

“I’m glad he’s a little frustrated that he’s not getting more production. We want our guys to feel that way,” coach Vic Fangio said. “I don’t know what he said or didn’t say on Twitter, but I’m OK with Jerry. Jerry’s in a good spot.”

Afterward, Jeudy tweeted, “ At least I got my conditioning in ” with a shrugging emoji and “it all makes sense now lol,” in response to a recent Odell Beckham Jr. quote criticizing Pat Shurmur, his ex-head coach in New York and current Broncos offensive coordinator.

Jeudy has scrubbed both comments and he didn’t speak publicly this week. But he was a big topic around Denver nonetheless.

“You want a receiver that wants the ball. You want a guy that wants it in his hand and wants to make plays,” quarterback Drew Lock said. “That’s what we like about Jerry."

Without injured Pro Bowl receiver Courtland Sutton around to draw away attention, Jeudy has been facing top cornerbacks and bracket coverages.

“It’s about fighting through those games and getting ready to practice the next week and go into the next one thinking you’re going to catch 15 that game,” Lock said. “Just being ready for that opportunity for the next Sunday.”

Highly regarded as the crispest route runner to come out of college in at least a decade, Jeudy has endured a maddening rookie season after being selected 15th overall in the NFL draft.

After starring for an Alabama team that went 38-4 during his three seasons in Tuscaloosa, Jeudy hasn’t stood out much on a Broncos team that’s already lost twice as many games this year as Jeudy did in his entire college career.

Jeudy has caught 38 of 82 passes thrown his way for 594 yards and two touchdowns, including one against Atlanta on Nov. 8 when he caught seven passes for 125 yards in his breakout game.

In the four games since then, however, Jeudy has just eight total receptions for 110 yards and no touchdowns. (Granted, one of those games was the no-QBs debacle in which practice squad receiver Kendall Hinton completed just three throws, including two to the Saints).

With Lock back under center, Jeudy was targeted fewer times Sunday night than tight end Noah Fant, third-year pro Tim Patrick and fellow rookie KJ Hamler, a second-round pick whose only touchdown so far was the game-winner with no time remaining against the Chargers last month.

Asked on Monday if Jeudy appeared bothered at Kansas City by an ankle injury that had limited his practice reps lately, Fangio said, “No, he’s nicked a little bit. He’s not 100%, but just the way the game went. ... We had a good amount of runs there. The ball just didn’t seem to go his way, but he’s definitely a guy that we like to get it to, want to get it to, and I foresee us getting it to.”

Jeudy’s and Hamler’s statistics are similar over the last month. Both have been targeted 21 times with Jeudy catching eight passes for 110 yards and Hamler catching 10 for 101 yards.

Jeudy’s statistics are actually better than Henry Ruggs III, the only receiver selected ahead of him in the draft. Although the Raiders’ speedy receiver has just 20 catches, they’ve covered 396 yards for a whopping 19.8-yard average.

And, like Hamler, Ruggs has a signature rookie moment on his resume: he hauled in a 46-yard touchdown throw from Derek Carr with 5 seconds left last week that lifted Las Vegas past the winless Jets 31-28.

Jefferson leads the class with 61 receptions for 1,039 yards and seven touchdowns, one fewer than Claypool has.

Yet, of the 13 receivers taken in the first two rounds, eight have two or fewer touchdowns and Higgins is the only one who projects to join Jefferson as a 1,000-yarder his rookie year.

Blame 2020, Shurmur said. Because of the pandemic, they didn't get the regular offseason or preseason to adjust to the pros and are turning out as the group most adversely affected by the lack of in-person offseason training.

“This year’s rookies really got cheated in terms of their development,” Shurmur said. “It’s something to be considered. I think when you don’t have that development piece, especially for a rookie, it’s hard. That’s why I think you see some of the teams that are established with older players that are probably grooving a little better this year than the teams that are trying to develop the young ones as we are here.”