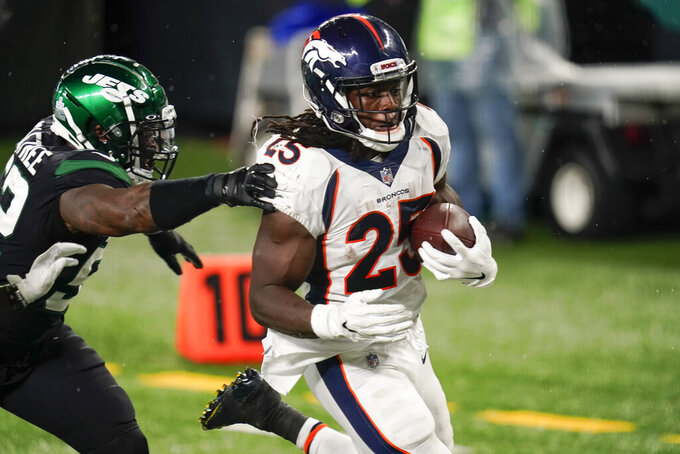 Denver Broncos running back Melvin Gordon (25) runs past New York Jets outside linebacker Alec Ogletree (52) for a touchdown during the second half of an NFL football game Thursday, Oct. 1, 2020, in East Rutherford, N.J. (AP Photo/Seth Wenig)

ENGLEWOOD, Colo. (AP) — Broncos running back Melvin Gordon III wasn't at practice Wednesday after being cited for driving under the influence and speeding by Denver police the night before.

“We are aware of the situation involving Melvin Gordon. Our organization has been in communication with him and is in the process of gathering more details,” the team said in a statement Wednesday.

Gordon was cited for traveling between 25 and 39 mph faster than the posted speed limit when he was pulled over Tuesday in downtown Denver, according to police records.

Gordon could face discipline from the NFL, including a suspension. Last year, Broncos safety Kareem Jackson was suspended for the final two games after a DUI arrest in September in downtown Denver.

Gordon’s agent Damarius Bilbo declined to comment when reached by The Associated Press.

Gordon is coming off his first 100-yard game for the Broncos after signing a two-year, $16 million free agent contract last offseason.

The Broncos had the last three days off after their game against New England was postponed a week because of several coronavirus cases on the Patriots.

Denver's last game was Oct. 1, when Gordon ran for 107 yards and two touchdowns in the Broncos’ 37-28 win over the New York Jets. His 43-yard TD run sealed the Broncos’ first win after opening the season with three losses.

Two-time 1,000-yard rusher Phillip Lindsay returned to practice last week and is expected to play Sunday at New England after recovering from a turf toe injury he suffered in the season opener last month.

KUSA-TV in Denver first reported Gordon’s citations. The station said Gordon is expected to be arraigned in Denver County Court on Nov. 13, the day before the Broncos fly to Las Vegas for a game against the Raiders.