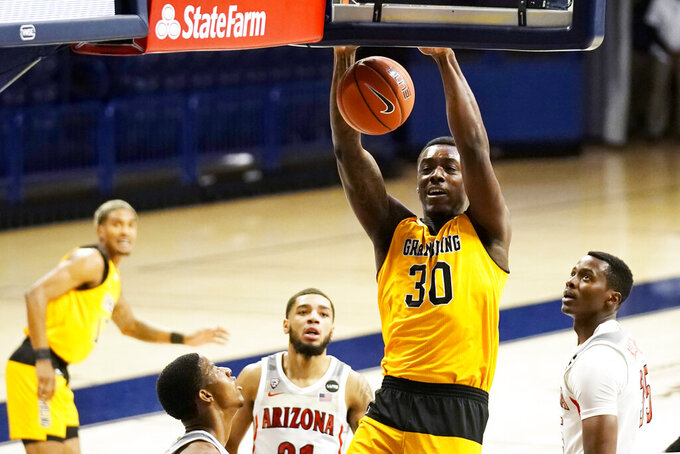 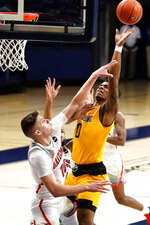 The McKale Center crowd consisted of a few family members and cardboard cutouts. The usual roars were replaced by piped-in noise and squeaking sneakers.

The buzz is not the same at Arizona's home court in this pandemic world, but the result was — even with a roster full of new players.

Jordan Brown had 19 points and 15 rebounds, James Akinjo added 19 points and Arizona opened the season with a 74-55 win over Grambling State on Friday.

“When you have so many young and new faces ... it's going to take time,” Arizona coach Sean Miller said. “I'm thrilled that we were able to win the game, first and foremost.”

The new-look Wildcats (1-0) looked a bit like the previous ones to kick off Miller's 12th season, knocking off another small conference school at home.

Even with McKale Center nearly empty thanks to coronavirus precautions, Arizona still played as if more than 14,000 fans were in the stands instead of the cardboard cutouts.

The Wildcats jumped out to an 11-point lead in the opening minutes and kept the Tigers (0-2) at bay in the second half to win their 12th straight season opener under Miller.

Arizona had 17 assists on 23 field goals and held Grambling State to 3-for-22 shooting from the 3-point arc after having its original opener canceled due to a positive COVID-19 test in Northern Arizona's program.

Two of the transfers — who happen to be roommates — helped the Wildcats jump out to a 39-23 halftime lead.

Akinjo, the Big East freshman of the year at Georgetown two years ago, was sharp running the offense and had 10 points by halftime. Brown, a former McDonald's All-American who played at Nevada, dominated inside, scoring eight points with nine rebounds.

Arizona was disjointed at times in the second half, particularly when Grambling State went to zone, but kept its cushion in double digits.

“All in all, being our first game with so many new players, new faces, I think it was OK, but we definitely know we can get a lot better,” Akinjo said.

Tigers coach Donte Jackson has steadied what had been one of the nation's worst programs — 0-28 in 2012-13 — with three straight winning seasons.

Grambling State, which lost its top two scorers from last season, opened a two-game road trip to Arizona with a 69-53 loss to Grand Canyon on Wednesday.

The Tigers struggled against Arizona's length and athleticism at the start, falling into a 15-4 hole. Grambling State made a run, but struggled to get shots to fall throughout the first half, finishing 8 for 28 from the floor and 2 for 11 from the 3-point arc.

The Tigers found more of a rhythm in the second half to prevent the Wildcats from running away from it, but continued to struggle from the 3-point arc, going 1 for 11.

Grambling State played well in the second half after struggling in the first and the experience should help once the SWAC season starts.

Brown and Akinjo helped Arizona build a big first-half lead and overcome its struggles against the zone in the second to win another opener.

Arizona honored Lute Olson with a patch on the front of its jerseys and the former coach saying “This is Arizona” at the end of its pregame hype video.

Olson died at 85 in August. The Hall of Fame coach turned a struggling program into a national powerhouse, including the 1997 national title.