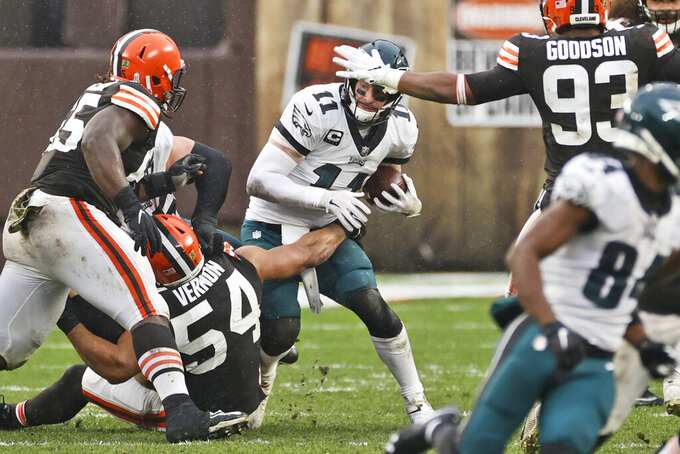 CLEVELAND (AP) — Olivier Vernon's dominating, three-sack performance last week resulted in an award for the Browns defensive end — and a plea from one of his coaches.

With star Myles Garrett sidelined again for Sunday's game at Jacksonville as he continues to recover from COVID-19, and with two other defensive starters out due to injury and the virus, the Browns are counting on Vernon and others to deliver against the Jaguars (1-9).

Last Sunday, Vernon stepped in in Garrett's absence and had his most productive game since coming to Cleveland last year from the New York Giants as part of the trade involving flashy wide receiver Odell Beckham Jr.

Vernon did his best Garrett impression by recording three sacks, including one for a safety, as the Browns beat the Philadelphia Eagles 22-17 to stay firmly in the playoff race. Cleveland sacked Eagles quarterback Carson Wentz five times and swarmed him numerous others.

Vernon was named the AFC's Defensive Player of the Week, and the 30-year-old also received a pat on the back and pseudo pep talk from Browns defensive coordinator Joe Woods.

“It was great that he got the award for being player of the week,” Woods said Friday. “That is what I told him: ‘Once you do it once, we expect to see it again.’ He has always been capable of doing that.

“You have seen him flashing at times, whether it is just pressuring the quarterback and just missing a sack. It was good. I am happy for him that he had that type of game.”

The Browns needed it and will need another one.

Cleveland’s defense will be ultra-thin at end — and elsewhere — Sunday.

Along with Garrett, the Browns will be missing ends Porter Gustin (he started for Garrett last week) and Joe Jackson, both of whom tested positive for the coronavirus this week and were placed on the reserve/COVID-19 list.

Also, top cornerback Denzel Ward, the NFL's leader in passes defensed, is out with a strained calf and starting linebacker Sione Takitaki, who had a 50-yard interception for a touchdown last week, is down after testing positive. Safety Sheldrick Redwine was ruled out Friday with a knee injury.

It's hardly an ideal situation, but Woods, who has had to plug holes all season because of injuries, thinks the Browns have adequate depth.

“I know you hear it a lot so it is a politically correct answer, but it is really next man up,” he said. "We were dealing with that same issue the week before with Myles being out. Now, it is just a different issue. We have flexibility across the defensive line so we will be able to move guys inside and outside whenever we need to. We feel comfortable going into this game.

“We are capable on the D line. It is just an opportunity for guys to show what they have.”

The rise in positive tests has made practicing difficult.

The Browns' offense and defense worked out separately Wednesday as a precaution to minimize the risk of spread of the virus, and Thursday's practice was limited to virtual meetings for the defense after Gustin's positive result closed the facility.

Not normal, for sure, but it's 2020. Woods wasn't surprised players handled the change well.

“It is right before a game, but you just have to deal with the circumstances," Woods said. "We do not want to be in the business of making excuses. There are a lot of other teams that are dealing with similar issues across the league. We did the best we could. I feel like the guys are prepared and ready to go.”

The Browns were thrown another curveball when the Jaguars decided to start quarterback Mike Glennon over rookie quarterback Jake Luton. Glennon makes his first start since Week 4 in 2017.

“We watched that tape,” Woods said with a smile. "For us defensively, there are some little adjustments here or there in terms of things that we are going to do, but for the most part, we are really worried about us executing our game plan against them.”