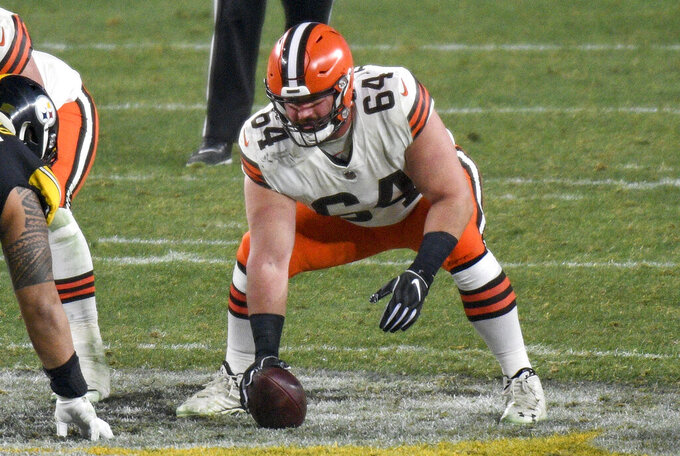 FILE - In this Jan. 10, 2021, file photo, Cleveland Browns center JC Tretter (64) snaps the ball during the first half of an NFL wild-card playoff football game against the Pittsburgh Steelers in Pittsburgh. Following the advice of Browns center and NFL Players Association President Tretter, Cleveland's players joined a list of teams who say they will skip voluntary in-person workouts this offseason. (AP Photo/Don Wright, File)

The Las Vegas Raiders followed suit later Thursday with their players releasing a statement through the NFLPA that they also wouldn't participate in the voluntary offseason program.

On Wednesday, the league issued a memo to all 32 teams announcing that the first four weeks of the voluntary program will be virtual before transitioning to in person at the team's respective training facilities.

Last year, the offseason programs were all done virtually and training camp was pushed back because of the COVID-19 pandemic.

Browns players released a statement through the NFLPA saying they are opposed to the idea.

“The NFL’s memo outlining how they plan to implement voluntary workouts falls short of what we as players believe is adequate,” the statement said. “The Cleveland Browns players agree that a virtual offseason, like we had last year, is the best decision for everyone in our league.

“COVID-19 continues to affect our players, our families and our communities, and we must continue to take it seriously. In addition to the ongoing threat of the pandemic, we felt healthier both mentally and physically last year, which we attribute to sufficient recovery time and the lack of additional wear and tear on our bodies during the spring months. The league-wide injury data supports us as well, as NFL players experienced a 23% reduction in missed-time injuries last season.

“For these reasons, we stand in solidarity with players from other clubs by exercising our CBA right to not attend in-person voluntary workouts this offseason. We are professionals who train year-round, wherever we spend our offseason. As we proved last year, we will be ready to compete this upcoming season.”

One of the arguments against the programs used by Tretter, who was elected union president last year as the pandemic hit, is statistics support that less workouts last season led directly to less injuries, including concussions.

Although Browns coach Kevin Stefanski didn’t have an in-person offseason program in his first year in 2020, he managed to overcome the challenge and led Cleveland to its first postseason appearance since the 2002 season.

The Raiders players gave a similar statement, but did leave open some room for players with offseason workout bonuses to participate. The Raiders have nine players, according to the website Over The Cap, who can earn bonuses by participating in the offseason program.

“We respect those players on our team and across the NFL who have contractual incentives linked to their participation in the program, but we stand in solidarity with our fellow players who are making the best decision on behalf of themselves and their families,” the statement from the players said.