Browns step from shadows into spotlight during playoff push 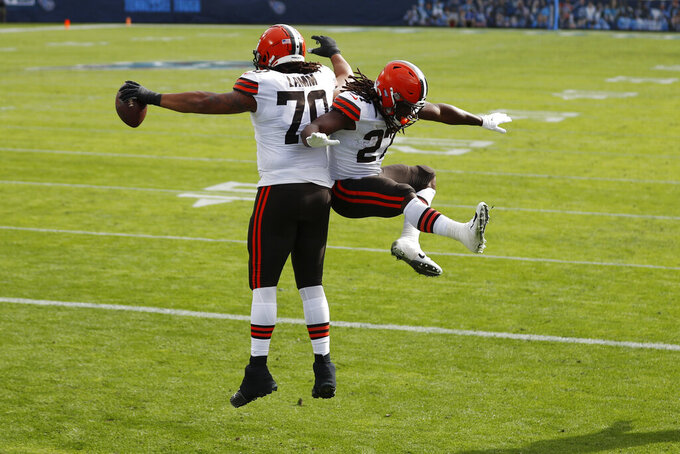 Cleveland Browns offensive tackle Kendall Lamm (70) celebrates with running back Kareem Hunt (27) after Lamm caught a touchdown pass against the Tennessee Titans in the first half of an NFL football game Sunday, Dec. 6, 2020, in Nashville, Tenn. (AP Photo/Wade Payne)

CLEVELAND (AP) — The Browns have quickly stepped out of the shadows and into the spotlight.

This time, they'll try not to let it melt them.

Fresh off an impressive road win at Tennessee last week, Cleveland's Dec. 20 matchup against the New York Giants was moved Wednesday by the NFL from a 1 p.m. kickoff and into the coveted Sunday night slot before a national TV audience.

The switch — Dallas and San Francisco was the original matchup — gives the Browns (9-3), who are closing in on their first playoff berth since 2002, more exposure as they'll make two prime-time appearances next week: Monday night against Baltimore and Sunday versus the resurgent Giants.

The scheduling flex by the league is a small but not insignificant sign of respect toward the Browns, who weren't expected to do much in 2020 but have become one of this season's best stories under first-year coach Kevin Stefanski.

Bumping America's team is a start.

"We are all excited,” running back Nick Chubb said of the back-to-back showcase games next week. “I can’t lie and say that I enjoy night games more than the morning games so I can get it over and get back home. But I am excited for what we have going here. I am excited for the fans to get to watch prime time. I am excited for all of it.”

But although his team is getting more attention, Stefanski isn't making too much of the upcoming showcase games.

The Browns aren't seeking respect, but they're starting to get more — and, based on a few things, they probably deserve it.

Cleveland has bona fide stars in Chubb, defensive end Myles Garrett and receiver Jarvis Landry. And while quarterback Baker Mayfield isn't going to make anyone's Pro Bowl list, he's playing much better and is already a household name many places due to his college pedigree, Heisman Trophy and commercial endorsements.

The Browns are entertaining. Sure they rely heavily on Chubb, Kareem Hunt and their offensive line to run the ball, but Cleveland can throw it as well. And, Stefanski has shown he's not afraid to gamble and dips into his bag of trick plays from time to time.

It's all led to the Browns getting to their best record in 13 years and playing relevant football in December — a major change for a franchise that has had 15 double-digit loss seasons since 1999 and went 0-16 three years ago.

Last year, the Browns seemed poised for their breakout after landing star receiver Odell Beckham Jr. in a trade coming off a 7-8-1 season. There was major outside buzz about Cleveland, which became a trendy pick to contend for a title.

But they flopped, going 6-10m and the most memorable of their four national TV appearances was Garrett's infamous helmet-swinging attack on Pittsburgh quarterback Mason Rudolph.

Chubb isn't sure if nerves played any part in the Browns' prime-time problems, but the experience can't hurt.

For Hunt, the Browns' ascension has greater meaning.

He grew up in Cleveland, a city with a sometimes unhealthy football obsession. Hunt understands the passion of Browns fans and is enjoying the success with them..

“Being born and raised here, it is huge,” he said. "Everybody is happy. I have never seen it growing up. To be a part of it means so much to me. I definitely want to just keep rolling and keep winning. It is fun winning. That is the biggest thing.

"Just seeing us turn around and keep going, it is not the end of the season. We still have a lot to prove.”

NOTES: RG Wyatt Teller remains on the COVID-19 list after being in close contact with an infected person outside the team. Stefanski said the team has “contingency” plans in place in case he's not cleared to play Monday. While he's out, Chris Hubbard, who was on the COVID-19 list earlier this season, has moved into Teller's starting spot. ... CB Denzel Ward remains sidelined with a calf injury that has kept out of the past two games.