Bruins goalie Rask opts out of playoffs to be with family 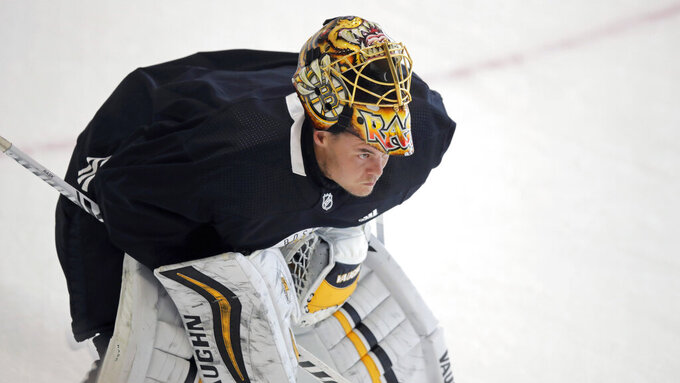 Boston Bruins goaltender Tuukka Rask skates away from the crease with his mask up at the NHL hockey team's camp on Tuesday, July 14, 2020, in Boston. (AP Photo/Charles Krupa)

BOSTON (AP) — Boston Bruins goalie Tuukka Rask has opted out of the defending Eastern Conference champions' playoff run to be with his family, the team said on Saturday morning — less than two hours before he was to start Game 3 of their series against the Carolina Hurricanes.

“I want to be with my teammates competing, but at this moment there are things more important than hockey in my life, and that is being with my family," Rask said in the statement released by the team. "I want to thank the Bruins and my teammates for their support and wish them success.”

General manager Don Sweeney said during a conference call 80 minutes before the game that Rask left the NHL’s bubble in Toronto to be with his wife and three young children, including a newborn. Jaroslav Halak started the game and stopped 29 shots to beat the Hurricanes 2-1.

“Maybe this is Jaro’s year,” said Bruins coach Bruce Cassidy, who found out about Rask’s decision from Sweeney on Saturday morning. ”Tuukka had a great run last year. So that’s certainly something we can rally around but by the same token it wasn’t going to be the end of the world to have Jaro in there."

A Vezina Trophy finalist who won the NHL's top goaltender award in 2014, Rask is the highest-profile player to opt out of the return to play from the coronavirus pandemic shutdown. After leading Boston to the Stanley Cup Final last year, he led the NHL with a 2.12 goals-against average this season and was second in save percentage and shutouts.

“He had been trying to battle through it,” Sweeney said. “We’re fortunate that his family is all healthy, and they’re going to have their dad back to be around on a regular basis is exactly what Tuukka needs to do at this point in time.”

Rask was the backup goalie on the Bruins team that won the Stanley Cup in 2011, and he took over the starting job when Thomas walked away from the game two years later. In his first season as the No. 1 goalie, Boston went back to the Cup final.

Rask led the Bruins back to championship series last year, when they lost in Game 7 to the St. Louis Blues. He helped them finish the pandemic-shortened regular season win the Presidents' Trophy with the best record in the league.

But Boston won just one of five games since returning to play in Toronto. After a 3-2 loss to Carolina on Thursday night that evened their best-of-seven series at one game apiece, Rask complained that the fan-free playoffs lacked the usual intensity.

“It doesn’t feel like playoff hockey out there. There’s no fans, so it’s kind of like an exhibition game,” he said. “It just feels dull at times.”

Sweeney acknowledged on Saturday that Rask had been struggling.

“I think you can rightfully infer that Tuukka was having some tough time being away in this environment,” the GM said.

"Let’s make no mistake about it: The stakes are high and the players are invested and Tuukka in his own right felt that he needed to be elsewhere rather than being here in this current situation,” Sweeney said.

“He’s the same goaltender that went to the Stanley Cup Final in a Game 7 last year and he’ll be the same player when we get up and running again next year. But at this point in time the two aren’t related.”

“There are obviously more important things than hockey in life," he said after the game. “He’s going to be at home, so I support his decision and I just want to step in and help the guys. I think they will do the same for me.”