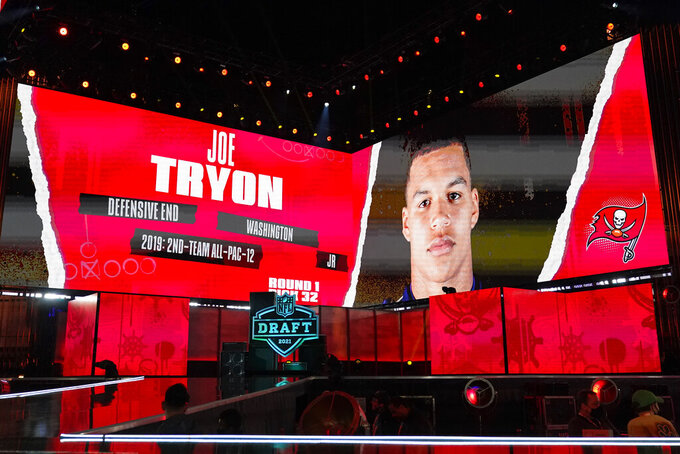 An image of Washington defensive lineman Joe Tryon is displayed on stage after he was chosen by the Tampa Bay Buccaneers with the final pick in the first round of the NFL football draft, early Friday, April 30, 2021, in Cleveland. (AP Photo/Tony Dejak)

With no glaring needs after keeping the core of the roster together in free agency, the Super Bowl champions are looking to add promising prospects who’ll have time to develop while Tom Brady and a deep, talented cast around the quarterback try to become the first club to win consecutive NFL titles since the 2003 and 2004 New England Patriots.

The 6-foot,5, 262-pound Tryon opted out of playing at Washington last season due to the coronavirus pandemic, but is a versatile linebacker who eventually will be counted to make a relentless pass rush spearheaded by Shaquil Barrett and Jason Pierre-Paul even better.

“It's nice to stockpile on edge rushers. ... You can't have too many of those guys,” general manager Jason Licht said. “He's big, he's athletic, plays very hard. .... We felt like he was a player who if he played (last) year and had similar prodution or better his value really would have gone up.”

With all 22 starters returning for next season, the Bucs entered the draft without any weaknesses that needed to be addressed with their top pick.

That’s uncharted territory for a franchise that missed the playoffs 12 consecutive seasons before signing Brady in free agency in March 2020 and assembling an all-star roster that helped the 43-year-old quarterback win his seventh Super Bowl title in February.

Kicker Ryan Succop also re-signed, and Licht navigated a tight salary cap situation to hold on to a number of reserves who could have left via free agency, too.

With all that out of the way, the goal now is to bolster depth by adding draft picks who potentially could contribute on special teams as rookies and compete for starting jobs in 2022 and beyond.

“We'll take our time with him,” Licht said, reiterating that the Bucs won't rush Tryon's development. “When he's ready, he'll be out there taking on a bigger role.”

The GM also said he's not concerned about Barrett, Pierre-Paul and the rest of the defense embracing the addition of another pass rusher.

“Those guys are awesome. They're going to do whatever they can to make the team better,” Licht said, adding that Barrett and Pierre-Paul, who's under contract for one more season, are in “no danger of losing their starting jobs.”

Tryon said he can't wait to begin working with the veteran linebackers.

“I can't wait to be a sponge, soak it all,” said Tryon, who was picked just after midnight, which technically means he was selected on his 22nd birthday.

While conceding it’s difficult to predict how many rookies might be able to make a roster with so many starters and key reserves returning, Arians nevertheless expects to come out of the draft an even stronger team.

“When you go back and look at the film, we have so many things to correct from last year,” Arians said last week. “There was steady growth, but we’re nowhere near where we could possibly be if we have a great offseason and stay healthy and continue to build a ton of depth.”