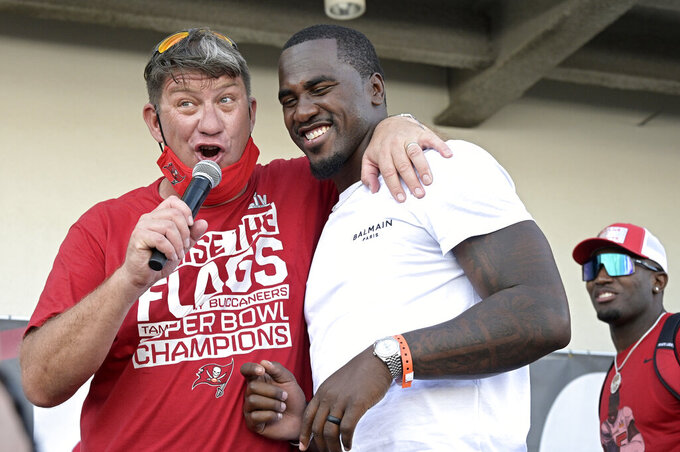 FILE - Tampa Bay Buccaneers general manager Jason Licht, left, address the audience with linebackers Lavonte David, center, and Devin White during a celebration of their Super Bowl 55 victory over the Kansas City Chiefs in Tampa, Fla., in this Wednesday, Feb. 10, 2021, file photo. When Jason Licht declared he was going to do everything he could to keep the Tampa Bay Buccaneers together, no one envisioned the process going as smoothly as it has for the Super Bowl champions. (AP Photo/Phelan M. Ebenhack, File)

TAMPA, Fla. (AP) — When Jason Licht declared he was going to do everything possible to keep the Tampa Bay Buccaneers together, no one envisioned the process going as smoothly as it has for the Super Bowl champions.

Even the team’s ever-optimistic general manager, who not only has followed through on a bold promise but also defied the odds of being able to retain all 22 starters from a star-studded roster assembled around Tom Brady.

Coach Bruce Arians cites a winning culture — fostered with help from Brady and a highly regarded coaching staff that also remains intact — as maybe the biggest factor contributing to the Bucs holding on to seven key players who could have departed in free agency this spring.

A pandemic-driven, league-wide reduction in the NFL salary cap for 2021 limited the amount of money potential suitors could offer on the open market helped, too.

So did veterans such as Brady and offensive lineman Donovan Smith accepting cap-friendly contract extensions to aid Licht’s mission.

“I can’t really point to a single factor ... but I think everybody wanted to be back,” Licht said. “Everybody’s getting paid fairly, but everybody’s very excited to try to (win) it again.’’

The first major move in a busy offseason was placing the franchise tag on wide receiver Chris Godwin.

“I could have gone somewhere and got more money, but I think this is just the place for me right now,” said Fournette, who could earn up to $4 million next season. “I'm glad to be back. They're glad to have me back.”

Somehow, there was still money left along the way to sign less heralded holdovers such as guard Aaron Stinnie, who started in the Super Bowl, and defensive reserves Kevin Minter and Rakeem Nunez-Roches, who also contributed to last season’s success.

And then there’s receiver Antonio Brown, a mid-season pickup who caught a touchdown pass in the Super Bowl. There’s a chance he could return, too.

“We're going to take our time. There’s offers out there, and we’ll see how it goes,” Arians said.

“We're still seeing what we can do on a couple of fronts,” Licht said of what's left to add. “I don't think it's ever done.”

The 68-year-old coach isn’t surprised Licht was able to “keep the band together.”

“I think there are a number of factors. I think they all know the culture and love the culture. And they’re all getting paid. Ain’t nobody coming back cheap,” Arians said.

“We obviously have a team that should be in the hunt again,” Arians added. “But I think the camaraderie of that football team, what they went through together with the pandemic and everything else, there’s a bond ... and it’s hard to break that bond.”

In some cases, including Brady, Smith and David, the Bucs included voidable years in contracts to make them more salary-cap friendly for 2021.

Licht isn’t concerned about the strategy causing problems with the salary cap in the future.

“There are some corrections that are going to have to take place at some point down the road, but we’re not putting ourselves in a position where next year we have to release a lot of good players,” the GM said. “We’re going to be in good shape if we continue to make sure we make smart decisions and do things right.”