Budget crunch could impact how college teams opt to travel 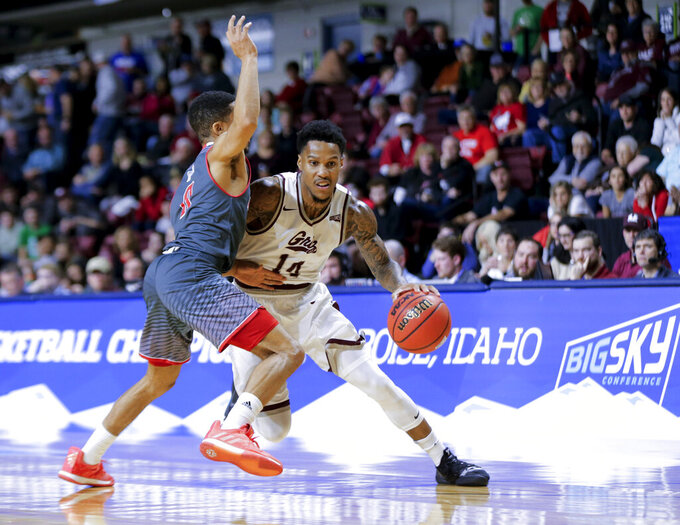 FILE - In this March 16, 2019, file photo, Montana's Ahmaad Rorie (14) tries to move the ball around Eastern Washington's Tyler Kidd during an NCAA college basketball game in the championship of the Big Sky men's tournament in Boise, Idaho. The cancellation of the NCAA Tournament has produced a budget crunch that leaves colleges everywhere looking for cost-saving measures. Chattanooga announced last month that any 2020-21 away games that hadn’t already been scheduled must be played within 150 miles of its campus. “A 150-mile radius isn’t going to do anything for us here in Montana,” Montana athletic director Kent Haslam said. “Some people can’t even get to a Walmart within 150 miles.” (AP Photo/Otto Kitsinger, File)

When college sports teams finally return to play, they might not be traveling quite as far as they did for road games before the pandemic.

The cancellation of the NCAA Tournament has produced a budget crunch that leaves colleges everywhere looking for cost-saving measures. One simple step is to cut back on travel.

That’s easier for some schools than others.

Chattanooga announced last month that any 2020-21 away games that hadn’t already been scheduled must be played within 150 miles of its campus in southeastern Tennessee. The teams also need to return to campus the day of the game to avoid any lodging costs.

“They understand it was a one-year situation,” Chattanooga athletic director Mark Wharton said of his coaches’ reaction. “I made it clear that after we get through all this and we feel fairly healthy for '21-22, we’d go back within reason and go to the model we were at before.”

Wharton said Chattanooga's entire football schedule and about 60% of the nonconference schedule for basketball had been put together before the new restriction. Wharton added that exceptions would be offered for any “guarantee games” in which the school earns enough money from making the trip to compensate for travel expenses.

While other schools haven’t specified a maximum distance for road games, they are trying to make their trips as short as possible. This doesn't apply to football because those schedules generally are put together years in advance.

“It’s about what we can do to stay regionally and local,” said Northern Illinois athletic director Sean Frazier, who is reducing his 2020-21 salary by 10% along with football coach Thomas Hammock. “If that means postponing a trip to California - pushing that out to later years - yes, we want you to do that.”

Arranging a schedule that includes mostly regional opponents is logical for programs such as Chattanooga and Northern Illinois that are close to other schools.

Frazier noted his Mid-American Conference school is within driving distance of several potential nonconference opponents in the Horizon League and Big East Conference, among others. A look at a map helps explain why Wharton instituted his 150-mile measure for Chattanooga.

“From the center of campus to downtown Birmingham is 150 miles center to center,” Wharton said. “Nashville’s a little closer. To look at schools within that (150-mile) radius, there’s quite a few.”

Other schools don’t have that luxury.

“A 150-mile radius isn’t going to do anything for us here in Montana,” Montana athletic director Kent Haslam said. “Some people can’t even get to a Walmart within 150 miles.”

“We’re like every other institution in the country, going through a fine-tooth comb, looking at things line by line, things that can be reduced,” Haslam said.

Haslam estimates the NCAA’s decision to distribute just $225 million to Division I schools rather than the anticipated $600 million as a result of the pandemic will cost Montana about $400,000. Wharton says Chattanooga is losing about $450,000 due to the cut in funding.

The Big Sky announced Monday a scheduling plan for the 2020-21 school year that will have only four teams qualifying for the softball and volleyball postseason tournaments. The Big Sky also will have a divisional scheduling format for men's and women's tennis as a way of reducing travel and will have the women's soccer regular-season champion earn the league's NCAA Tournament automatic berth rather than holding a postseason tournament in that sport.

Big Sky officials also announced each member school will have permission to make its own decisions in accordance with NCAA policies regarding when its student-athletes could resume practicing and competing.

In a video accompanying the announcement, Big Sky Commissioner Tom Wistrcill noted that his league's 11 members are from eight different states that might have different responses to coming back from this pandemic.

Wistrcill noted the possibility schools in some states could be able to play a complete fall sports schedule while member schools in other states might not be ready to do that. He wanted to avoid a situation where schools in one or two states might hold the others back.