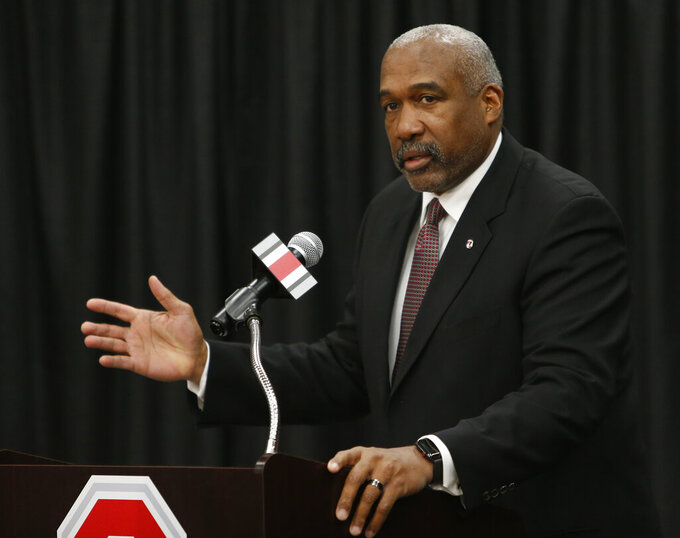 Some of that money will be made up by television revenue from football, but that amount is yet to be determined, Smith said. Ohio State is scheduled to play at least nine games beginning Oct. 24.

Firm numbers are elusive, Smith said, because all football games may not be played if there is a virus outbreak and the framework of the basketball season is yet to be determined. Among the other “moving parts” is whether other fall sports will play their seasons in the spring.

“Our budget is uncertain,” Smith said. “You have the numbers, but I might just be quite frank with you — they mean nothing at this point relative to accuracy.”

Unlike fellow Big Ten members Minnesota and Iowa, Ohio State will not cut any of its 36 intercollegiate sports. The proposed $180 million budget for the fiscal year that began July 1 includes $25 million for scholarships, $3.6 million for student-athlete academic support, $3 million for meals and nutrition, and $1.8 million for sports medicine and sports psychology services.

Schools around the country have cut more than 100 sports from their programs to help deal with budget shortfalls from the pandemic, including at least 84 at Division I programs.

Smith said 47 contracted employees at Ohio State, which includes coaches, will be asked to take 5% salary cuts, but it is not clear how many have agreed.

“That will be their decision,” Smith said. “It is certainly optional because they are contracted, and I anticipate they will. Ryan Day and Chris Holtmann and I had already had conversations.”

Asked whether 5% was asking enough sacrifice of Day and other higher-salaried employees, Smith said he was “100%” comfortable with the number.

“Everybody has their right to an opinion,” he said.

The furloughed employees will have no choice. Ohio State said 345 employees will take furloughs ranging from five days to 60 days, although Smith said the 84 staff members forced to take 60-day furloughs will be deployed elsewhere in the university.

The pandemic has affected all sources of revenue for the athletic department, which is self-sustaining and doesn't draw on other university funds or taxpayer dollars. The department will lose $64 million in ticket revenue alone.