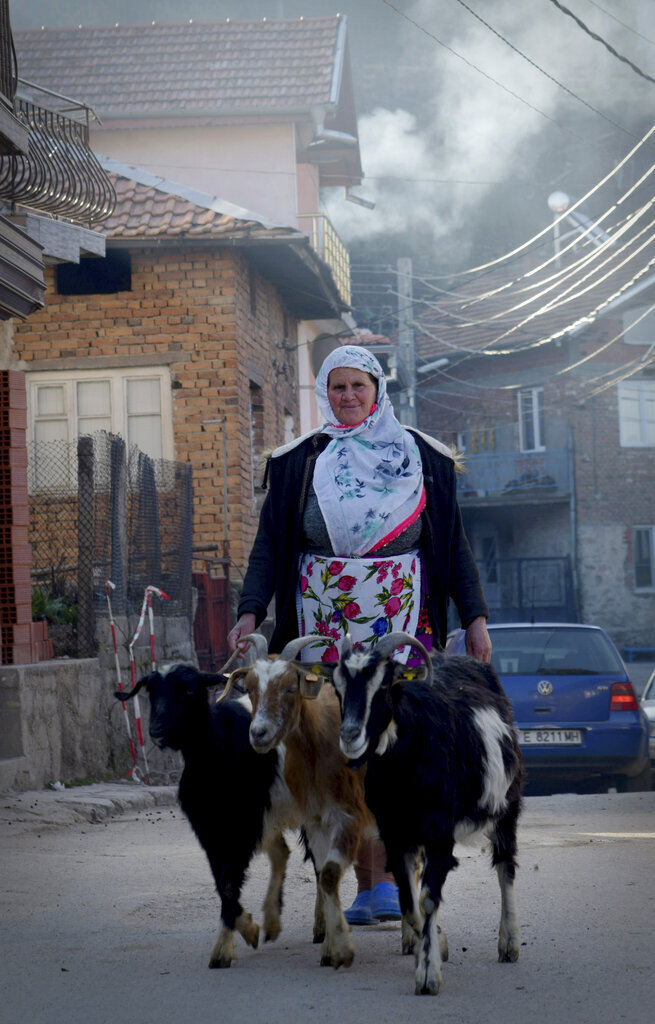 A woman walks her goats in the village of Ribnovo, Bulgaria, Sunday, April 11, 2021. Despite the dangers associated with COVID-19 and government calls to avoid large gatherings, Hundreds of people flocked to the tiny village of Ribnovo in southwestern Bulgaria for a four-day festival of feasting, music and the ritual of circumcision which is considered by Muslims a religious duty and essential part of a man's identity. (AP Photo/Jordan Simeonov)

RIBNOVO, Bulgaria (AP) — On the eve of the holy month of Ramadan, Muslims from the southwestern corner of Bulgaria flocked to the sleepy mountain village of Ribnovo for a four-day festival of feasting, music and mass circumcisions.

This year’s event in Ribnovo, a mountain village 130 kilometers (80 miles) south of the capital, Sofia, was overshadowed by the coronavirus pandemic. Since most of the festivities, however, took place outdoors, the community decided to keep their tradition alive and maintain the circumcision ceremony, which is considered by Muslims a religious duty and essential part of a man’s identity.

The group ritual is held here every four or five years, depending on demand and because most people in the region are poor and can rarely spare money for an individual celebration.

A lack of jobs has forced many to look for better fortunes abroad, but due to the pandemic some have returned home.

Ismail Atipov, 31, who has been living and working for the last 10 years in the Spanish city of Pamplona, decided to come home and throw a festival this year for his newborn son.

“When my wife was pregnant, I vowed to organize this event if my baby was a boy. He was born and here I am,” he said.

Little Ismail was one of 80 baby boys circumcised Sunday during this year’s festival.

The ceremony followed three days of preparations. People filled the streets to greet a procession that precedes the circumcision of the boys.

Proud fathers paraded the babies on horses that were bedecked in flowers through the village. Among those looking on were elderly women in traditional clothing and head scarves.

The afternoon was reserved for oil wrestling and running competitions.

Ribnovo’s 3,500 inhabitants belong to the Pomak minority, whose Christian ancestors converted to Islam during the five centuries of Ottoman rule. Nearly one-fifth of Bulgaria’s 1 million Muslims are Pomaks.

Many older villagers still recall repression against the Muslim minority during Bulgaria's Communist regime, including the forceful changing of Muslim names and bans on circumcision.