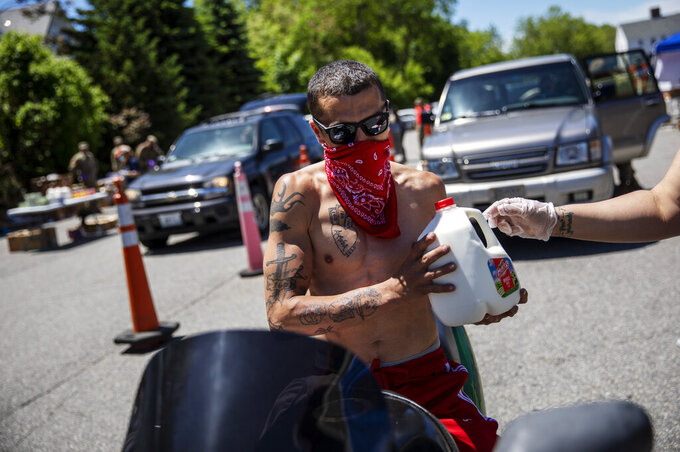 Matt Fontaine receives a gallon of free milk on his motorcycle distributed by members of the Rhode Island National Guard and volunteers with the Dairy Farmers of America to families in need, Wednesday, May 27, 2020, in Pawtucket, R.I. Dairy farmers have a milk surplus because demand has dropped as schools and restaurants closed during the coronavirus pandemic, and some farmers have had to pour excess milk away. Farmers donated the 4,300 gallons of milk given away today at McCoy Stadium. (AP Photo/David Goldman)

PROVIDENCE, R.I. (AP) — Rhode Island officials have planned a series of virtual forums this week for the owners and operators of businesses that will be allowed to reopen next week as the state's economic restart continues.

The forums being hosted by the Rhode Island Commerce Corp. and the state Department of Health will outline safety requirements for reopening.

Business owners will have the opportunity to ask questions at the end of each forum.

Gov. Gina Raimondo has said the state wants business input on the decisions.

The forums for gyms and fitness studios as well as general businesses are scheduled for Wednesday.

Forums for personal services businesses — including hair and nail salons — and for restaurants are scheduled for Thursday.

Craddock has also authorized an additional 90-day grace period for all documents that previously held March expiration dates, and they are now valid until Sept. 30.

The decisions were made to minimize personal interactions at agency offices during the coronavirus crisis. Currently, only the agency’s main Cranston office and Middletown satellite office are open for transactions by appointment only.

Transactions should be done online or via mail when possible, the agency said.

Republican lawmakers want the state legislature to examine Rhode Island’s response to COVID-19 outbreaks in nursing homes, where the majority of the state’s deaths from the virus have occurred.

Members of the House Republican Caucus held a press conference on the State House steps Wednesday to call on the House Oversight Committee to hold hearings on the issue.

The lawmakers say they want to know what Democratic Gov. Gina Raimondo’s administration is doing to address outbreaks in nursing homes and what it plans to do going forward.

Health officials reported Wednesday that another 21 people have died and about 140 people have contracted COVID-19.

The total number of deaths from the virus in Rhode Island is now 655, with more than 14,000 residents having tested positive since the pandemic started.

More than 400 of the fatalities occurred in nursing homes and other long term care living facilities, according to state data.

The coronavirus pandemic and the resulting closure of schools and restaurants has limited the demand for milk and many farmers have been dumping the excess.

But instead of dumping the milk, the Dairy Farmers of America, a national dairy cooperative, and its New England farm family members donated 4,300 gallons of milk to families in need at McCoy Stadium. Customers were limited to two gallons each.