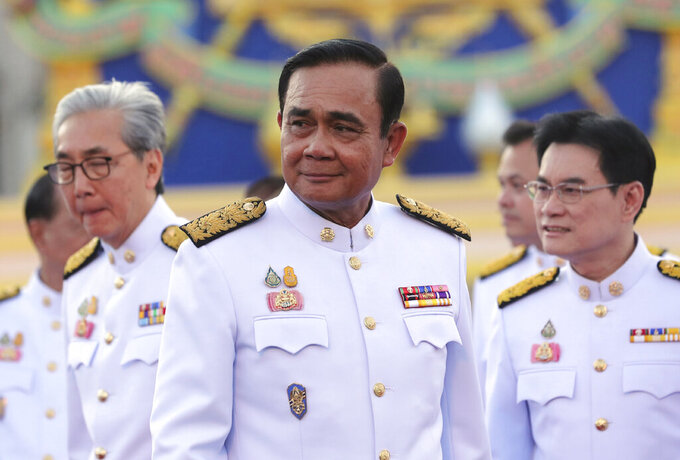 FILE - In this July 16, 2019, file photo, Thailand's Prime Minister Prayuth Chan-ocha attends a group photo with his cabinet members at the government house in Bangkok. On Thursday, Aug. 6, 2020, Prayuth reshuffled his Cabinet, with an experienced banker taking over the post of finance minister. (AP Photo/Sakchai Lalit, File)

BANGKOK (AP) — Thai Prime Minister Prayuth Chan-ocha has reshuffled his Cabinet, with an experienced banker taking over the post of finance minister.

The names of seven people appointed to eight Cabinet positions were published Thursday in the Royal Gazette, making them official.

Four appointments fill portfolios that had been held by a group of ministers who resigned last month. They were led by Somkid Jatusripitak, a deputy prime minister who has been in several governments during the past 19 years and had been overseeing recent economic stimulus packages.

Somkid’s team resigned after a shakeup in the governing Palang Pracharath party and as the government faces an expected economic contraction due to the coronavirus pandemic. The Asian Development Bank recently forecast that Thailand’s economy will contract by 6.5% in 2020, compared to its December 2019 projection of 3.0% growth.

Palang Pracharath revamped its leadership to strengthen its military clique and their allies at the expense of party executives such as Somkid, who were regarded as technocrats.

Predee Daochai, chairman of the Thai Bankers’ Association, was appointed finance minister, replacing one of Somkid's team. Predee last month resigned his job as co-president of Thailand’s Kasikorn Bank ahead of joining the government.

Supattanapong Punmeechaow, a former director of a major petrochemical company, took over as energy minister and was also appointed a deputy prime minister, where he is expected to fill Somkid’s shoes in directing economic policy.

Controversial Deputy Agriculture Minister Thammanat Prompao remains in the Cabinet despite calls for his ouster. He was appointed after last year’s election despite having been imprisoned in Australia on a charge involving heroin smuggling. He is a key political organizer in northern Thailand for the Palang Pracharath party.