Calculating homeless aid has relied on a flawed formula 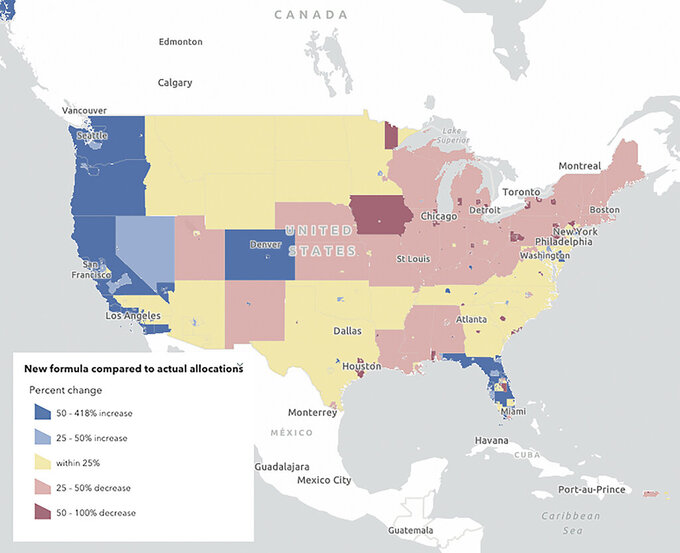 This image provided by the Howard Center for Investigative Journalism shows HUD's traditional way of calculating homeless aid doesn't take into consideration how many homeless people live in a given area. The CARES Act required a one-time change to the formula to better address homeless needs. Had this new formula been implemented a decade ago, it would have dramatically shifted homeless funding nationwide. (Austin Fast/Howard Center for Investigative Journalism via AP) 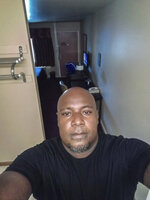 Eric Smith will finally have a place to call home after years of sleeping in his car and on his aunt’s sofa because of an obscure change in how the federal government calculates homeless aid.

For decades, Washington has determined how much taxpayer money to give states, counties and cities for their homeless residents, using a formula that actually has nothing to do with homelessness. But the COVID-19 pandemic, and its billions in emergency aid, forced lawmakers to rework the old, politically popular homeless formula, which spread the wealth regardless of need.

In Los Angeles, the change has meant nearly $120 million more in aid and a chance for Smith and thousands like him to fundamentally change their lives.

“I’m not going to take that for granted,” said the 44-year-old Smith, who until recently worked in a Los Angeles group home for people with autism and mental disabilities. “Once I get my own place, I could grow more and do more.”

When Congress passed the ​Coronavirus Aid, Relief, and Economic Security Act​in March, it included $4 billion for one of the government’s main homeless funding programs. Given that the cash infusion was nearly 14 times greater than last year, lawmakers also mandated a change in how the payments were calculated, because anyone who knew anything about the funding formula knew it had nothing to do with homeless people.

But the fix was a one-time-only change and, barring any new action by Congress, the government will revert to using the misdirected formula for homeless aid next year.

“If we’re going to try and address homelessness, we should use a formula that prioritizes homelessness,” said Alex Visotzky, legislative affairs manager for the Los Angeles Homeless Services Authority, one of the groups that advised the Department of Housing and Urban Development on ways to rework the formula.

HUD agreed, and in June released a new formula for calculating Emergency Solutions Grants that factored in an area’s homelessness and measures of poverty — a dramatic change from the old formula that was heavily influenced by the number of prewar homes in a given area.

The change had a profound impact on which parts of the country got homeless aid.

An analysis by the Howard Center for Investigative Journalism found that most of the CARES Act homeless funds went to a minority of places with the most severe problems. And 62% of the 362 cities, counties, states and territories eligible for these funds received relatively smaller amounts than they would have without the formula change.

California, which has over half of all unsheltered homeless people in America, benefited the most, with cities and counties up and down the state getting millions more in funding.

Applying the revised formula over the last decade, the Howard Center analysis also found that states such as California, Florida, Oregon, Washington and Colorado could have gotten millions more in homeless funding. Los Angeles city and county combined would have received $119 million more since 2011; New York City would have gotten an additional $131 million.

The CARES Act homeless relief funding was available in two rounds of payouts during the spring and summer.

In the interest of speed, the first round of grants, totaling $1 billion, went out under the old formula, said Todd Richardson, an economist who leads HUD’s research division. The department could have made double that amount available under the law, but chose not to in a tacit acknowledgment of the old formula’s shortcomings.

The formula’s flaws were well-known to anyone who worked on homeless policy, but the problem persisted because there was not enough political will to push through reform, Capitol Hill and HUD staffers said. When Congress drafted the $2 trillion CARES Act in March, however, it mandated that HUD create a new way of estimating need in order to ensure better distribution of the unprecedented amount of Emergency Solutions Grants, or ESG.

“We have known for some time that the ESG formula, while it’s effective at getting money to many poor communities, doesn’t target great to homelessness,” Richardson said in an interview. “We believed that we needed to ensure that the vast majority of the funds were targeted as effectively as possible to the places that have the most severe homeless needs.”

To fix the formula, HUD adopted four basic metrics to assess need during the pandemic: total homeless count, as determined by HUD’s biennial Point-in-Time homeless census; total count of unsheltered homeless people; the rate of renter households whose family income is less than half the area’s median family income; and the rate of the very low-income renter households, who are living in overcrowded conditions or without a full kitchen or plumbing.

As a result, Youngstown, Ohio — a city in Mahoning County, which recorded just 148 homeless people in 2019 — saw one of the largest relative decreases from the CARES Act’s new homeless funding formula, according to the Howard Center analysis. In the first round, it received just over $1 million. In the second round, with three times the amount of money going out compared to the first, it received $657,102.

Colleen Kosta, who coordinates homeless services for Mahoning County, said she understands the magnitude of homelessness is far greater in other states, but she also worries that any change in funding would strip her community of precious resources.

“As a small community and a small city, we’re already getting significantly less money,” Kosta said. “While we don’t have a large unsheltered (homeless) population, we still have a population of people that we’re trying to assist and make sure they’re safe and safely housed.”

Had the new formula been used years earlier, the Howard Center’s analysis showed, 81 smaller cities and counties nationwide that received direct homeless aid from HUD over the last decade would have fallen below the eligibility threshold. But using the untargeted formula meant that states like California, Florida and New York that have the country’s highest homeless populations lost out on millions of relief dollars.

BIRTH OF A BAD HABIT

Retired economist Harold Bunce was surprised to learn that the 45-year-old formula for fighting urban decay was being used to calculate homeless aid when the Howard Center tracked him down in September.

“They don’t use any direct estimates of homelessness when they distribute the funds?” asked Bunce, who retired as head of HUD’s economic affairs office over a decade ago. One of his first projects for the department was analyzing the community development block grant formula.

The formula, now used to allocate homeless relief dollars, is actually two in one. The first takes into consideration population, poverty rates and overcrowding. The second considers poverty rates, the number of housing units built before 1940 and “growth lag” — slower population growth compared to the national average or a population decline. A locality receives funds based on whichever formula awards it the most money, and just under half of the homeless grant recipients fall under the second, which considers prewar housing.

The Senate Appropriations committee acknowledged the flaw of using this formula for homeless aid in 2001, publishing a report that said, “The CDBG formula has no real nexus to homeless needs.”

Igor Popov is the chief economist at Apartment List, a website where renters can find a place to live. In his 2017 Stanford University doctoral dissertation, Popov detailed how a community’s stock of pre-1940s housing is a terrible indicator of economic outcomes. In an interview with the Howard Center, he called its use one of HUD’s “original sins.”

“This was not some terrible misunderstanding of what, you know, drives homelessness,” Popov said, adding that old housing was just a variable “that really stuck.”

Yet the program carried on relatively unchanged until the COVID-19 pandemic.

Most complaints about the homeless funding formula have been parochial, of the “my city didn’t get their fair share” ilk, rather than a desire to overhaul an ineffective system, said a senior congressional staffer.

But when it came time to write the CARES Act, legislators were in total agreement that the formula needed to be changed, he said, adding it was just a matter of deciding which variables to use.

The staffer, who spoke on condition he not be named, said he was looking “forward to finding out which flexibilities that we’ve applied should be taken forward as a general rule.”

Experts say changing to the new formula permanently will be an uphill battle. As Bunce put it: “Once something is locked in, it’s hard to change it in Washington.”

Lawmakers don’t typically vote to cut their constituents’ funding, and the CARES Act formula would have increased homeless grants to just 11 states and the District of Columbia over the last decade, while cutting funding everywhere else, according to the Howard Center analysis.

Homeless experts like Visotzky, the Los Angeles official, say the solution to the formula problem is more homeless funding overall to get people into housing and prevent others from falling into homelessness.

”The more we have a scarcity of resources, the more we have to fight over these formulas,” Visotzky said. “We need to use this opportunity to really rethink the way we do a lot of things.”

“It would be a shame to have made all of this progress,” he said, “and not learn from it.”

This story was produced by the Howard Center for Investigative Journalism at Arizona State University’s Walter Cronkite School of Journalism and Mass Communication, an initiative of the Scripps Howard Foundation in honor of the late news industry executive and pioneer Roy W. Howard. For more see h​ttps://azpbs.org/. Contact us at howardcenter@asu.edu.​