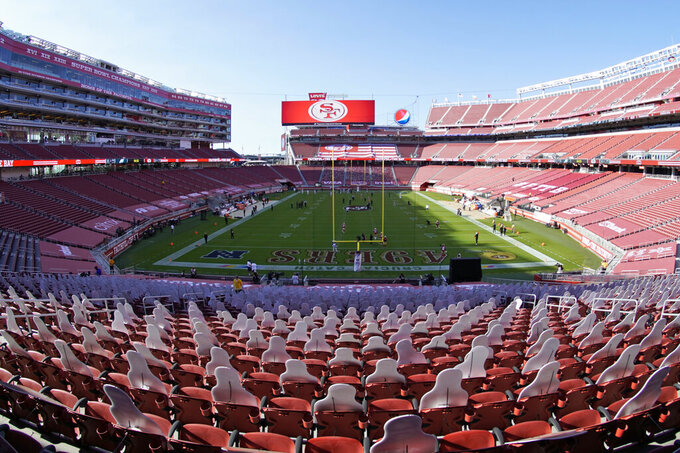 FILE - In this Oct. 4, 2020, file photo, is an empty Levi's Stadium before an NFL football game between the San Francisco 49ers and the Philadelphia Eagles in Santa Clara, Calif. California officials ramped up more mass coronavirus vaccination sites Friday, Feb. 5, 2021, amid a critical supply shortage, with one San Francisco Bay Area county announcing a mega-site capable of 15,000 shots a day even as another said it stopped first doses to ration enough for those needing their second inoculation. Santa Clara County and the 49ers said they will open California's largest vaccination site at Levi's Stadium early next week, eventually capable of injecting up to 15,000 people each day as supplies allow. (AP Photo/Tony Avelar, File)

SACRAMENTO, Calif. (AP) — California is adding mass inoculation sites even as the shortage of coronavirus vaccine has local officials restricting who gets shots, with Los Angeles County saying it will limit new vaccinations to ensure second doses are available to those already in line for them.

Santa Clara County and the San Francisco 49ers said Friday they will open California’s largest vaccination site at Levi’s Stadium early next week. It eventually will be capable of injecting up to 15,000 people a day.

The Pentagon, meanwhile, announced troops will start arriving in a little over a week to run a new site at California State University, Los Angeles opening Feb. 16. Other federal employees will head to a second 6,000-shots-a-day site at Oakland-Alameda Coliseum.

In California, however, the problem isn’t vaccination capacity, it’s limited vaccine supply that is forcing rationing. For example, while the state has said anyone 65 and over can get vaccinated, until Friday Southern California’s Riverside County was only serving people 80 and over at the sites it operates.

In Los Angeles County, home to 10 million residents, starting next Tuesday the five mass vaccination sites it runs will only give second doses.

“We’re just struggling with the supply, the limited supply, and feeling an obligation to make sure that people who have had a first dose are able to get their second dose,” Dr. Paul Simon, the county’s chief science officer, said during a briefing.

The county’s five so-called mega-pods are among more than 360 vaccination sites countywide, including ones run by the city of Los Angeles, pharmacies and clinics. The county has administered more than 1 million doses so far, Simon said. More than 846,000 were first doses.

In the San Francisco Bay Area, Napa County stopped giving first doses to preserve its remaining supply for those who are ready for second shots. Pfizer and Moderna each say two shots are required for their vaccines to be most effective.

Napa County Supervisor Alfredo Pedroza said officials are now having to “manage the expectations” of the 27,000 people who took the first dose and another 46,000 who have made appointments and are waiting to get the first shot.

“We’re getting a lot of the questions from community members asking, ‘is my second dose in jeopardy?’ And right now, we don’t have an answer,” Pedroza said. “There’s a lot of frustration, there’s a lot of emotion because there’s been a lot of mixed messages.”

Andrew Noymer, a public health professor at the University of California, Irvine, said ensuring second doses is the right move.

“Nobody likes to hear they halted first doses, but I think it’s infuriating to skip the second doses,” he said. “If we don’t get significantly more doses of vaccine then we’re in bigger trouble than bickering over who gets the second dose.”

Some 4.2 million shots have been administered in California. State health officials could not immediately say how many of those were second shots that would reflect the number of people in the state’s population of nearly 40 million with maximum protection from the virus.

They hope to soon be better able to track the inoculations as the state’s MyTurn online reservation site becomes widely used and as the state turns to insurance giant Blue Shield to run a new, centralized vaccine distribution system.

The state’s worst coronavirus surge continues to abate as new virus cases fall sharply. The daily average now is about 14,500 cases, down almost 50% from two weeks ago.

The California Department of Public Health rescinded its hospital surge order, which had required hospitals to delay some elective surgeries and to accept patients from other counties whose intensive care unit capacity had dropped below 15%.

Deaths also are starting to fall but remain exceptionally high. Another 558 were announced Friday and in the last week almost 3,500 have died.

Gov. Gavin Newsom has acknowledged the initial vaccine rollout was unacceptably slow and had the state ranked near the bottom nationally. There’s been improvement and the state now is averaging 1 million shots a week but limits on the supply coming from the federal government means California’s capacity to provide shots far outstrips available vaccine.

Santa Clara County, which has about 2 million residents and is the most populous in Northern California, plans to use Levi’s Stadium to significantly increase its vaccination numbers. It will start out by administering 5,000 shots a day and as supplies increase will be able to triple that.

It’s the latest of what has become a long list of mass vaccination centers that include Dodger Stadium in Los Angeles, Petco Park in San Diego, Disneyland in Orange County, Oakland-Alameda Coliseum and Cal Expo state fairgrounds in Sacramento.

Meanwhile, Kaiser Permanente opened two mass vaccination centers under an agreement with the state, one at Moscone Center in San Francisco and the other at Cal Poly Pomona, in Los Angeles County, each with the capacity to administer up to 10,000 doses a day.

With so many vaccination locations coming online so quickly, California Department of Public Health spokesman Darrel Ng couldn’t even offer a ballpark estimate of the state’s overall capacity.

“These are really fluid numbers,” Ng said in an email.

He offered the hope that one day California will be awash in so many doses that administering them — instead of acquiring them — will be the problem.