California to allow sale of to-go cocktails through 2021 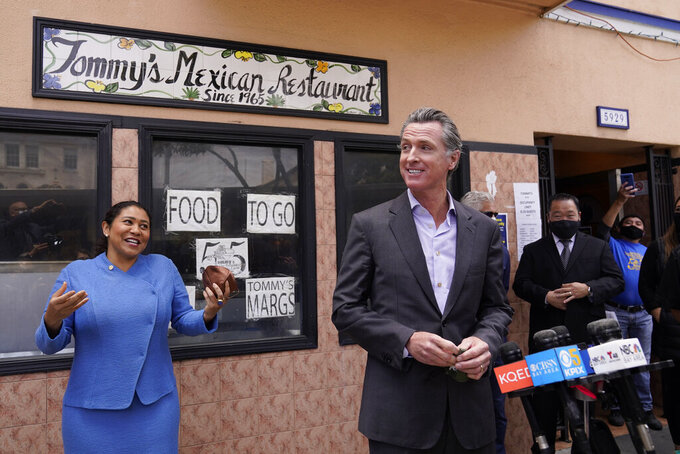 California Gov. Gavin Newsom prepares to speak at a news conference about relief for restaurants as San Francisco Mayor London Breed laughs and looks on outside Tommy's Mexican Restaurant in San Francisco, on Thursday, June 3, 2021. The governor offered his support for the extension and expansion of outdoor dining and takeout cocktails. (AP Photo/Eric Risberg)

SAN FRANCISCO (AP) — There's one pandemic change that Californians are sure to toast: The to-go cocktail.

Democratic Gov. Gavin Newsom announced Thursday that the state will continue allowing restaurants to sell takeout alcohol and keep expanded outdoor dining through the end of the year. Restaurants turned to takeout and outdoor dining during the past year as coronavirus restrictions severely limited indoor service.

“I’m very excited about this and I think this is a good thing for our economic recovery. It’s also a good thing for our public health because what occurs is more people will still be outside," Newsom, a Democrat, said during a news conference outside Tommy's Mexican Restaurant in San Francisco.

The extensions come as California plans to lift most business restrictions and social distancing rules on June 15, allowing restaurants to resume indoor service at full capacity. Even so, maintaining outdoor dining could help the state control virus spread, Newsom said.

The California Department of Alcoholic Beverage Control relaxed regulations in March 2020 to let restaurants sell alcohol to go, right around the time Newsom imposed the nation's first statewide stay-at-home order, shuttering restaurants for in-person dining. Since then, restaurants have been allowed to sell pre-packaged alcohol like bottles of beer and wine as well as pre-mixed cocktails ordered with food.

In May, as the state began allowing outdoor service to resume, the department made it easier for restaurants to expand outdoor dining by offering temporary catering authorizations. That allowed restaurants to continue to sell alcohol in off-premises locations like sidewalks and adjacent parking lots where many set up tables. The department has issued more than 10,000 of those licenses, said Newsom spokeswoman Amelia Matier.

Local governments also play a big role in determining how restaurants operate outdoor dining, and Newsom sent officials a letter Thursday urging them to continue allowing outdoor dining in places such as sidewalks and parking lots that aren't zoned for eating.

In San Francisco, “parklets" that expand open-air dining onto streets and roadways have popped up all over the city. Mayor London Breed, who joined Newsom, called outdoor dining “the one bright light we had" during the pandemic. She's now fighting with the city's board of supervisors over a permanent expansion of such outdoor services.

“It's bringing life to the city like never before," she said. “As far as I'm concerned, they're here to stay."

Lawmakers could permanently extend the allowance of to-go cocktails through a bill by state Sen. Bill Dodd, a Napa Democrat. He said his proposal would boost income for struggling restaurants and give customers greater choice.

Newsom, who owns wineries and restaurants, praised the industry for its resilience and innovation during the pandemic. But restaurants struggled amid the stop-and-start restrictions that often varied by county. Even now, counties with the lowest virus transmission rates can only allow indoor dining at 75% capacity if all patrons are fully vaccinated. Nearly a third of California restaurants permanently closed during the pandemic, the California Restaurant Association told lawmakers last month.

All capacity restrictions will lift June 15, but now employers say they're struggling to find workers. As of May, restaurant employment was down by a quarter from pre-pandemic levels.

The chairwoman of the California Republican Party said Newsom's announcement, which she called a photo op, came too late for restaurants forced to close and workers who lost wages.