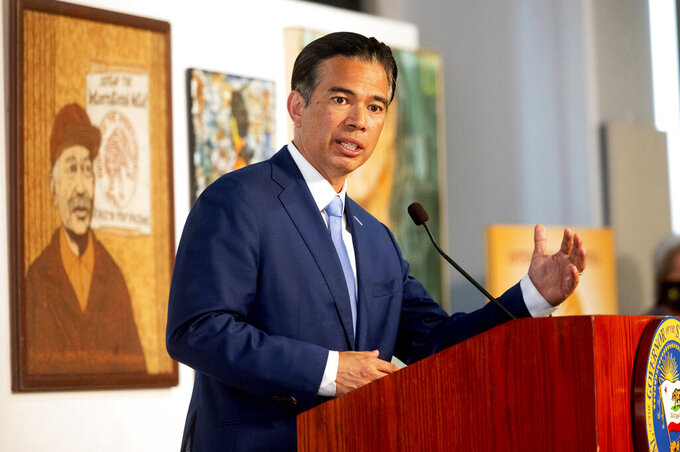 SAN FRANCISCO (AP) — California Gov. Gavin Newsom nominated a progressive Filipino American state assemblyman as California's next attorney general Wednesday, ensuring a push from the top for criminal justice reform and other liberal priorities in the nation's most populous state.

Assemblyman Rob Bonta, a 48-year-old Democrat from the east San Francisco Bay Area city of Alameda, would be the first Filipino American to hold the state's top law enforcement job, which has an outsize role in influencing national policy and moving financial markets.

If he is confirmed as expected by the Democratic-led Legislature, Bonta would replace Xavier Becerra, who was confirmed last week as health and human services secretary in the Biden administration. It's also a stepping stone to higher office; in addition to Becerra, Vice President Kamala Harris and former Gov. Jerry Brown both held the job.

Kent Scheidegger, legal director of the Criminal Justice Legal Foundation that has typically opposed previous Democratic attorneys general, said Bonta is “fully on board with the fundamentally wrong direction that California criminal justice has been taking in recent years."

Newsom's choice gives him a powerful ally as he faces a likely recall election this year. It also comes amid rising attacks against Asian Americans and Pacific Islanders, which prompted AAPI elected officials to call on him to tap Bonta. California has more than 6 million people of Asian descent.

“From his unique life and lived experience we have someone that doesn’t need to be educated on these things,” Newsom said.

Bonta's nomination was announced at the International Hotel-Manilatown Center, a San Francisco site rich with Filipino history. He was born in the Philippines to missionary parents, but the family returned to California when he was 2 months old. They settled in California among the farmworker activist community led by Cesar Chavez.

Bonta said he’ll use the bully pulpit that comes with his role to protect people, and he said he supports efforts to create a 24/7 hate crime hotline in the AG's office. He criticized former President Donald Trump for contributing to the “reductionist devaluing of Asian Americans throughout this nation” with racist language and slurs regarding the coronavirus.

Bonta's nomination comes at a time when progressive prosecutors have been winning seats — and facing pushback — in some of California's biggest cities.

Newly elected Los Angeles County District Attorney George Gascón was sued by his own deputies and faces criticism from other state district attorneys and an effort to recall him from office after he promised not to seek the death penalty or prosecute juveniles as adults and told prosecutors to stop seeking cash bail for lesser offenses.

In San Francisco, public-defender-turned-District Attorney Chesa Boudin took heat in January after a man who had been put on parole struck and killed two pedestrians.

While Becerra's tenure overlapped with Trump's, when more than 100 lawsuits were filed against his Republican administration, Bonta said he hopes to look inward for reforms now that Joe Biden is president.

Before he was elected to the state Legislature in 2012, Bonta served one term on the Alameda City Council and as a deputy city attorney in San Francisco. He is married with three children.

The timeline is tight for Bonta, who would face election in 2022, potentially against a field of eager Democrats with more statewide name recognition. Minutes after the announcement, Bonta posted a campaign-style video on Twitter with details about his parents’ history of activism and his legislative record.

Bonta told reporters: “My theme in any election has been the voters will decide, but I will never be outworked."