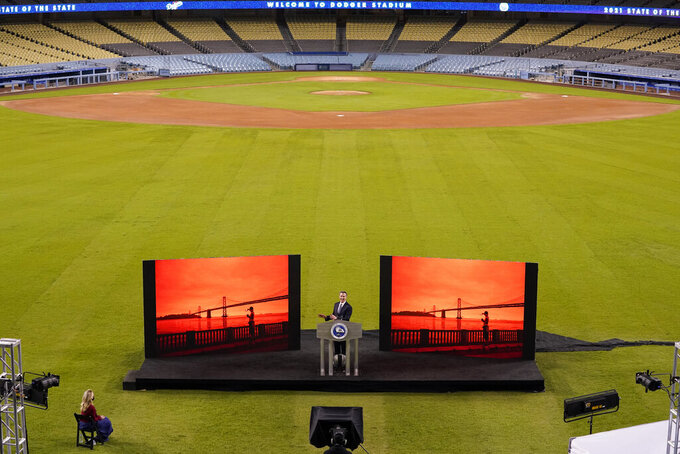 SACRAMENTO, Calif. (AP) — Standing alone in center field of an empty Dodger Stadium, California Gov. Gavin Newsom cast himself as a bold if imperfect leader and his state as on the cusp of a new day.

Officially, it was the annual State of the State address, but the Tuesday night speech also served as the unofficial campaign kickoff for the first-term Democratic governor, who almost certainly will face a recall election later this year fueled by criticism of his handling of the coronavirus pandemic.

Newsom shed his typical long-windedness and sometimes hard-to-understand jargon for a crisp, 28-minute speech that he scheduled in the evening in Los Angeles to try to maximize viewership. He's prone to heavy use of numbers and statistics, but this time stayed above the surface, talking about the future of the nation’s most populated state in broad, optimistic terms.

The governor “led all framing and tweaking and finalized the speech himself," while the writing team was led by Jason Elliott, a senior counselor to Newsom with a focus on housing and homelessness, said Sahar Roberston, Newsom's senior communications adviser.

Though Newsom gave only passing reference to the campaign against him, he did so in the most explicit terms yet, referring to organizers as “promoting partisan political power grabs with outdated prejudices."

Newsom's remarks were adopted as anti-recall talking points by politicians from the Asian and Pacific Islander communities in a Wednesday news conference, where they painted the recall as driven by adherents of former President Donald Trump and conspiracy theorists.

“Let’s call this recall what it is: a partisan political power grab," said Democratic Assemblyman David Chiu of San Francisco.

Recall organizers are Republicans and say they have collected nearly 2 million signatures, well above the 1.5 million needed by March 17 to force an election. The GOP has only 24% of registered California voters, but organizers say they are attracting Democrats and independents.

“There are a lot of Democrats who are frustrated,” Assembly Speaker Anthony Rendon conceded after Newsom's speech. But Rendon, a Democrat who sometimes is at odds with Newsom, said the governor deserves credit, not condemnation, for a smart and measured response to the pandemic.

Critics say Newsom has been too restrictive during the health crisis, shuttering businesses and limiting people's activities far longer than necessary. They also say he has not followed his own directives, notably when he attended a lobbyist's birthday party at the fancy French Laundry restaurant last fall as he was telling Californians to stay home.

Newsom acknowledged “mistakes" Tuesday but left out specifics, saying only that “we own them, we learn from them, and we never stop trying."

“Gavin’s State of the State address was nothing more than a desperate campaign commercial, paid for by taxpayers, that attempts to explain away a level of incompetence no other governor in California history has reached," Jessica Millan Patterson, chairwoman of the California Republican Party, said in a statement.

Dr. Mindy Romero, founder and director of the Center for Inclusive Democracy at the University of Southern California, said the campaign undertones were clear, particularly in Newsom's choice of venue. Normally, the State of the State is delivered to a joint session of the Legislature from the Capitol in Sacramento.

The usual packed room was impossible with coronavirus restrictions, and rather than speaking to an empty legislative chamber, Newsom chose an empty baseball stadium in the state's largest city.

“Instead it feels like, ‘My governor is in campaign mode, at a campaign rally, telling me what he wants me to know as he’s facing a recall election,'" she said.

Newsom chose Dodger Stadium because it holds about 56,000 people, nearly the number of Californians who have died from the coronavirus. It's also served as a mass testing and vaccination site during the pandemic's darkest days but is slated to welcome back baseball fans — with crowd limits — next month, a move emblematic of the greatly improving conditions in California.

“It was dripping of so much sugary symbolism," said Mike Trujillo, a Los Angeles-based Democratic strategist who worked for one of Newsom's opponents in the 2018 governor's race. “It didn't come off the same way as it does in the state Capitol."

Newsom and his team appeared to take some pointers from other major political events held during the pandemic, like last summer's virtual Democratic National Convention and January's inauguration of President Joe Biden.

Two large screens were on either side of Newsom during the speech with faces of his supporters on a Zoom call, silently clapping and cheering as he spoke.

“At the end of the day, it was probably an attempt to do too much, but nothing that's damaging," said Stutzman, whose former boss came to power after a recall election and whose governorship was marked by celebrity and spectacle.

Newsom, for his part, kept up the positive, forward-looking messaging Wednesday as he remained in Los Angeles to visit a vaccination site.