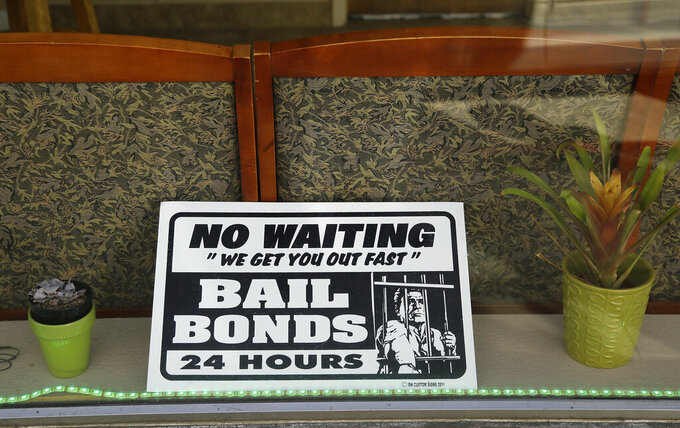 FILE - In this Dec. 23, 2015, file photo, a sign is seen in the window of a bail bonds office across from the Hall of Justice in San Francisco. The California Supreme Court ruled Thursday, March 25, 2021, that judges must consider suspects' ability to pay when they set bail, essentially requiring that indigent defendants be freed unless they are deemed too dangerous to be released awaiting trial. (AP Photo/Eric Risberg, File)

SACRAMENTO, Calif. (AP) — The California Supreme Court ruled Thursday that judges must consider suspects’ ability to pay when they set bail, essentially requiring that indigent defendants be freed unless they are deemed too dangerous to be released awaiting trial.

“The common practice of conditioning freedom solely on whether an arrestee can afford bail is unconstitutional,” the justices said in a unanimous decision.

Judges can require electronic monitoring, regular check-ins with authorities or order suspects to stay in shelters or undergo drug and alcohol treatment, Associate Justice Mariano-Florentino Cuéllar wrote on behalf of the court — conditions that “in many cases protect public and victim safety as well as assure the arrestee’s appearance at trial.”

However, “where a financial condition is nonetheless necessary, the court must consider the arrestee’s ability to pay the stated amount of bail — and may not effectively detain the arrestee ‘solely because’ the arrestee ‘lacked the resources’ to post bail.”

The decision comes after voters in November rejected a state law that would have ended California’s cash bail system entirely by substituting risk assessments for every suspect, and after months when a judicial order set bail at $0 for lower-level offenses during the coronavirus pandemic. The court’s ruling allows cash bail, so long as defendants can afford it.

“It’s going to be a big change in the way the system works,” American Bail Coalition Executive Director Jeff Clayton said on behalf of California’s bail industry, noting that it is similar to an April ruling by the Nevada Supreme Court. “The lens of due process is going to be on every bail, because prosecutors are going to have to prove, by clear and convincing evidence, a flight risk or danger” if they seek to keep a lower-income suspect in custody.

There will be fewer bails set, and at lower levels, though he said the impact on the bail industry is uncertain. Also uncertain is the effect on public safety, Clayton said, because prosecutors can still argue for detaining those they think are dangerous or likely to flee.

The justices cited the same unfairness concerns that led state lawmakers to pass the 2018 law that would have ended cash bail, and that is driving new proposed legislation to set bail at $0 for misdemeanors and low-level felonies.

The ruling and the pending legislation “go hand in glove” because the Legislature must now decide which alleged crimes should require $0 bail, said Democratic state Sen. Robert Hertzberg, who is leading reform efforts.

California Police Chiefs Association President Eric Nunez said no one should be jailed solely because they can’t afford bail, but “a rigid zero-dollar bail scheme shouldn’t prevent a judge from considering public safety risks for serious and repeat offenders.”

The high court's ruling "doesn’t eliminate bail completely, but it eliminates the unfairness of bail,” Hertzberg said. California’s bail system “just spun out of control and this brings it back to its core principals of what bail is supposed to be about in the first place.”

Bail is money or property that can be forfeited if suspects fail to appear for trial. Previously, judges set bail based on suspects’ criminal records and pending charges. Critics said that let wealthy suspects go home to prepare for trial while lower-income defendants stayed locked up, a system they said encouraged some innocents to plead guilty to get out of jail.

The decision was hailed by reform groups, while the California District Attorneys Association didn't object and said prosecutors have long felt there should be thoughtful reform, including on the financial issue.

“The research is clear, the negatives of cash bail fall disproportionately on Black and Brown communities without improving safety,” said Chief Probation Officers of California Executive Director Karen Pank. “Wealth should play no role in the justice system and we will continue to fight for a pretrial system that focuses on safety, fairness and effectiveness."

While it considered the case, the high court in August took the extraordinary step of requiring California judges to follow a lower court ruling and set bail amounts based on what suspects can afford to pay.

“The jail house door shouldn’t swing open or closed based on how much money you have in your pocket,” Bonta said Thursday.

Judicially creating a new “ability to pay” consideration violates the Victims’ Bill of Rights Act, also known as Marsy’s Law, approved by California voters in 2008, the Criminal Justice Legal Foundation argued in a friend of the court brief.

The foundation, which represents the interests of crime victims, contended that making cash bail contingent on suspects’ ability to pay violates state law, which allows for considering the safety of the public and victim, the seriousness of the alleged crime, the suspect’s criminal record, and the likelihood that he or she will flee.

Judges already had the ability to release suspects on their own recognizance, foundation attorney Kymberlee Stapleton said after the ruling.

“The money bail is there to ensure that they do come back for their trial date, and they’re incarcerated to protect the victim or the public,” she said. ”It’s hard to tell what impact this will have on victim and public safety going forward.”

The high court’s ruling came in the case of 66-year-old Kenneth Humphrey of San Francisco, who was jailed for more than eight months because he couldn’t post $350,000 bail on charges of stealing $5 and a bottle of cologne from a neighbor in a senior housing complex in May 2017.

The Association of Deputy District Attorneys in Los Angeles County noted that Humphrey has a long criminal record and so faced a potentially long prison sentence on charges including robbery and residential burglary. He is alleged to have demanded money from a 79-year-old man who uses a walker, then followed the victim into his apartment where he stole the items.

“Pretrial liberty should be the norm and not the exception,” said San Francisco Public Defender Mano Raju. He said he spoke Thursday to Humphrey: “He’s thrilled.”