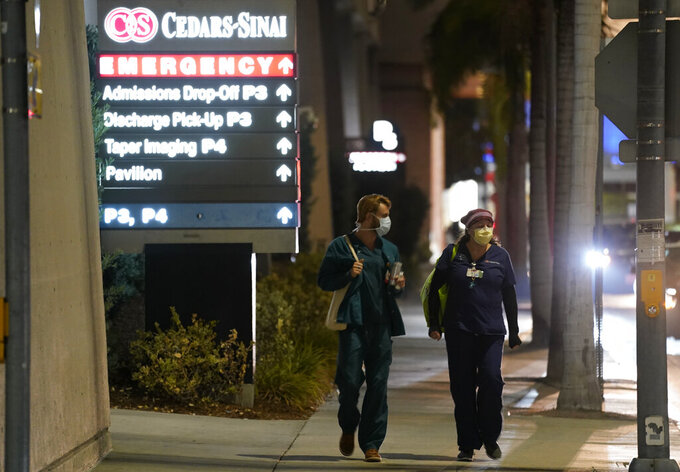 FILE - In this Jan. 5, 2021, file photo, Cedars-Sinai Medical Center workers walk outside the hospital, in Los Angeles. The California Senate has rejected a bill aimed at making it easier for some hospital workers to get workers compensation benefits. (AP Photo/Chris Pizzello,File)

SACRAMENTO, Calif. (AP) — The California Senate on Thursday rejected a bill aimed at making it easier for health care employees to have hospitals pay their medical bills related to COVID-19 and other diseases that may have been contracted on the job — a move business groups said would have cost them too much money.

Companies pay their workers' medical bills if they get sick or injured while on the job. In some cases, workers must prove their injury or illness is work-related to get the benefits. Last year, the California Legislature passed a law that assumed COVID-19 was work-related, shifting the burden to employers to prove it wasn't.

That law is scheduled to expire in 2023. A bill by Sen. Dave Cortese, a Democrat from San Jose, would have made it permanent. It would have also added other presumptions to the workers' compensation law for hospital workers, including cancer under some circumstances, post traumatic stress disorder, certain respiratory diseases and muscle or ligament injuries.

The bill had to pass the Senate by Friday to have a chance at becoming law this year. But it fell short on Thursday before the Senate adjourned for the week. Lawmakers are not meeting Friday.

Cortese on Thursday agreed to change the bill to remove respiratory illnesses such as asthma and chronic obstructive pulmonary disease (COPD). But it wasn't enough to get the bill passed.

Cortese said his goal was to give hospital workers, of whom he says 90% are women, the same protections as other medical professions, including emergency medical technicians.

“It really comes down to equal work, equal compensation,” he said.

Business groups, led by the California Chamber of Commerce, opposed the bill, labeling it a “job killer.”

“Such a drastic shift in the law will create an astronomical financial burden on healthcare employers and the system, creating an appreciable pact on the cost of healthcare at a time when we are trying to make healthcare more affordable,” Ashley Hoffman, policy advocate for the California Chamber of Commerce, wrote in a letter to lawmakers that was signed by 35 other groups.

The bill is part of a broader discussion in California about which coronavirus modifications should continue. Gov. Gavin Newsom said he will lift most of the state's coronavirus rules on June 15.

The state Senate passed a bill earlier this week that would let restaurants continue to serve alcohol outside. The state Assembly passed a bill that would require local governments to keep letting people comment during their meetings by telephone or the internet. Both bills still must pass the other legislative chamber and be signed by the governor before becoming law.