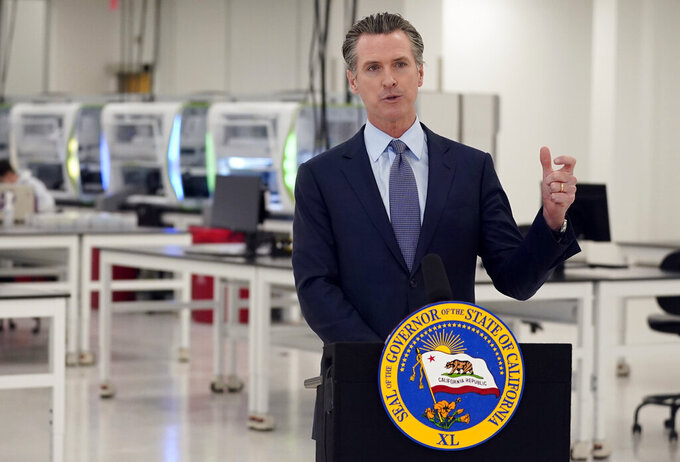 FILE - In this Oct. 30, 2020, file photo, California Gov. Gavin Newsom speaks at a COVID-19 testing facility in Valencia, Calif. Newsom on Monday, Nov. 16, 2020, apologized for what he called "a bad mistake" in attending a birthday party that broke the very rules that he has been preaching to slow the spread of the coronavirus. (AP Photo/Marcio Jose Sanchez, Pool, File)

SACRAMENTO, Calif. (AP) — California Gov. Gavin Newsom said this week he made a “bad mistake" by attending a friend's birthday dinner during a spike in coronavirus cases and promised to “own it" and move forward. But there was more to the story than he revealed.

Photos obtained by Fox 11 in Los Angeles show the governor in the company of multiple lobbyists and raise questions about how truthful Newsom was in claiming the dinner was outdoors. The images threaten his credibility at a time when he and health officials are pleading with Californians to stay home and not gather with friends and relatives outside their households.

Los Angeles County Health Director Barbara Ferrer, whose county is facing the possibility of a three-week lockdown if cases continue on their current trajectory, called Newsom’s decision to attend the dinner “a big mistake” that she trusts won’t happen again.

Jack Pitney, a professor of politics at Claremont McKenna College, said “in the future when critics of lobbyists make their case, this dinner will be Exhibit A.”

Newsom attended the dinner on Nov. 6 at the French Laundry, one of the finest and most expensive restaurants in the San Francisco Bay Area. His administration didn't acknowledge it until a week later when a reporter was tipped and asked about it.

Newsom apologized on Monday and described the dinner as outdoors. But the photos show Newsom and his wife, Jennifer Siebel Newsom, sitting maskless around a crowded table of 12 inside a room that was enclosed on three sides.

The fourth side was open, though the woman who took the photos and provided them to Fox 11 said a sliding glass door eventually was closed after Newsom’s group became loud. The woman was not identified by the station.

Nathan Click, a spokesman for Newsom, did not answer about whether the room was closed off and why the governor maintained the dinner was outdoors.

The restaurant is in Napa County, which at the time of the dinner was allowed to offer limited indoor service. It now is among 41 counties that can only serve outdoors.

California's coronavirus guidance for restaurants does not describe in detail what counts as outdoor dining, but many have set up tents that create spaces enclosed on three sides. The guidelines do say that people at the same table don't have to socially distance, though Newsom repeatedly has encouraged people to do so when around those outside their households.

Newsom’s office has not responded to repeated questions from The Associated Press about whether the governor wore a mask while not eating or drinking or was tested following the dinner.

Last month, his office tweeted “Going out to eat with members of your household this weekend? Don’t forget to keep your mask on in between bites.”

The full list of attendees has not been disclosed but it's known Newsom was seated among at least three lobbyists, including two top officials for the California Medical Association, an organization that represents and lobbies for 50,000 doctors and has recently tweeted messages including #StayHome and #WearAMask.

The dinner was held for the 50th birthday of Jason Kinney, a friend of Newsom's and a lobbyist. His firm, Axiom Advisers, counts high-profile clients including energy companies, Facebook and Netflix, and the California Building Industry Association. He used to lobby for the California Medical Association and served on Newsom's transition team in 2019.

The three-star Michelin restaurant offers a $350 tasting menu and separate $450- and $850-per-person menus for parties of up to 12 people. It's not clear what Newsom's party had but he said he and his wife paid for their meals.

Critics quickly noted the disconnect between dining at such a fancy restaurant when so many Californians are unemployed.

As State Sen. Shannon Grove, the chamber’s Republican leader, framed it: “Pop Quiz: In California, $350 is equal to: (a) one week’s unemployment check for millions of California workers (b) the cost of Gavin Newsom’s dinner at Napa’s French Laundry restaurant or (c) both of the above.”

While Newsom faces heat for his decision, some state lawmakers — Republicans and Democrats — are being criticized for going to Hawaii this week for the annual Independent Voter Project conference as California's nearly 40 million residents are told to avoid travel.

A full list of legislators has not been made public but two Southern California Assembly members, Democrat Blanca Rubio and independent Chad Mayes, issued statements Wednesday acknowledging their participation.

Both said it is an important gathering for public policy discussions and that this year's conference was especially salient because it focused on reopening the economy. They said all participants adhered to strict health safety protocols.

Hayes said he was impressed with Hawaii’s Safe Travels program for visitors and “will strongly advocate that California implement a similar program to help breathe new life into our tourism economy."

Pitney said by ignoring recommendations on travel and gatherings, Newsom and the legislators reinforce “the perception that there’s one rule for the elites and one rule for the rest of us.”