Call of the wild: Great outdoors is great escape in pandemic 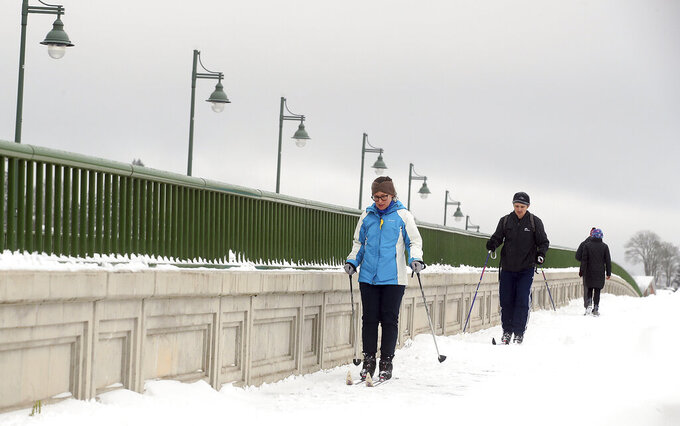 FILE - Erin Jaske and Scott Sandridge cross country ski across the Manette bridge in Bremerton, Wash., on a snowy day, in this Saturday, Feb. 13, 2021, file photo. During the pandemic, people around the world sought relief from lock downs and working from home in leisure sports. (Meegan M. Reid/Kitsap Sun via AP, File)/Kitsap Sun via AP

For those venturing off the beaten path, be advised — it’s a little crowded out there.

By nature’s standards, anyway, as the great outdoors has become the great escape.

Hiking trails, parks and other open spaces were packed in 2020 with a cooped-up population searching for fresh air during the coronavirus pandemic. Locked down, shut in or just fearful of crowds, people took up hiking, biking, cross-country skiing, snowshoeing, camping, tennis and golf — to name several — in significant numbers.

“It’s both heartening and a little bit mind-blowing to think how things are going this year,” said Richard Hodges, the Nordic director at White Pine Touring in Park City, Utah. “It’s been really fun — a lot of work, but really fun. All we’re doing is trying to get people outside to go play in the snow.”

Outdoor enthusiasts are certainly stepping outside to play in whatever environment — when pandemic restrictions permit it, of course, and in accordance with stay-at-home guidelines. But the numbers illustrate that many are heeding the call to the wild:

— 8.1 million more Americans went hiking in 2020 compared to '19, according to a preview of an upcoming outdoor participation report from the Outdoor Foundation, the philanthropic wing of the Outdoor Industry Association.

The foundation's research also reflected a decline in inactivity for most age groups and across all income levels. There was a 52.9% surge in outdoor participation, an increase from 50.5% in 2018 and 50.7% in 2019.

The upward trend in hiking doesn't come as a surprise to Sandra Marra, the president and CEO of the Appalachian Trail Conservancy.

From nearly day one of the pandemic, a myriad of hikers have been trekking along the Appalachian Trail, which encompasses about 2,200 miles (3,540.6 kilometers), traverses through 14 states and sees about 3 million-plus visitors a year.

Word of caution before going: Check the weather reports and dress accordingly. And don't park on someone's property, even if the trailhead lots are full.

“What's happened is a whole bunch of people that never really recreated outdoors like this, suddenly discovered the fact there are these easily accessible trails not that far from their backyard,” Marra explained. “That's wonderful. But we’re finding a lot of people are out there not prepared for just how rugged this trail is. It’s not a walk on the bike trail in the middle of the city."

Daily walks — “constitutionals" in another era, perhaps — are on a rapid rise, too. No numbers needed to reflect that — just meander down any block or street in any city or any country.

In New York City, when the weather is good, people are out in droves — conjuring images of Edith Wharton characters strolling the promenade. It just so happens there is an Edith Wharton Walking Tour in New York. For now, it's limited to an online stroll through the Gilded Age.

It's the Gliding Age for cross-country skiing, which hasn't seen popularity like this since the 1970s after waxless skis were introduced. Equipment is quickly leaving the shelves. Rentals have been booming, too.

“Every single day of the week is like a weekend day,” said Hodges, who has about 20 kilometers (12.4 miles) of tracks at the Nordic center in Park City. “I'm stunned about the seemingly limitless interest right now in cross-country skiing.”

Reese Brown, the executive director of the trade group Cross Country Ski Areas Association, envisioned this sort of surge happening after bikes — along with other outdoor equipment — became such a hot commodity during the summer.

“We started to see what was happening with biking and hiking and this mass flocking to the outdoors by people who generally would be running on a treadmill somewhere,” Brown said. “That’s when it kind of switched for us as a industry. We were like, ‘Wait a second. This is going to continue.'"

Golf remains on the upswing, too, according to an engagement study by the National Golf Foundation. There were almost 502 million rounds, which was the most since 2006 and the biggest yearly increase since 1997 — the season Tiger Woods captured his first major championship. The number of active, on-course golfers in the U.S. grew by half a million in 2020, the study found, up to 24.8 million.

The sport also grew by double digits around the world. Golf Australia said participation has increased by up to 15% since the lockdowns went into effect, with golf memberships up by 30% in the 24-39 age group.

Already popular in Sweden, the number of rounds increased a whopping 42%. And the first 18-hole course open to the public in Spain, Golf Olivar de la Hinojosa, saw an increase of 30% in the number of rounds played. Gregorio González-Irún Velasco, the general director of a company that oversees Golf Olivar and another golf course in the Madrid community, said golf schools and driving ranges have been operating near capacity for some time.

Ana Fernández de Diego, a Spanish professional golfer who owns and teaches at Golf Vídeo Escuela, said she has seen unprecedented growth in the sport.

“Golf is one of the things that people can do without any risks now," she said. "It’s in open air, with safe distancing, and it gives you the luxury of not having to wear a mask for four or five hours.”

Tennis courts were popular as well with nearly three million first-time players, according to data cited by the United States Tennis Association through the Physical Activity Council’s Participation report. In all, more than 21.6 million Americans took the courts in 2020.

“It’s evident that many people recognize tennis as the ideal social-distancing sport,” USTA CEO Mike Dowse said in a story on the tennis association's website.

Tennis is not alone. Hiking, anyone?

“This is the new future for us. The new reality,” Marra said. "There’s huge opportunity to build a whole new generation of land stewards.”