Campaigns make last push for votes in Alaska before election 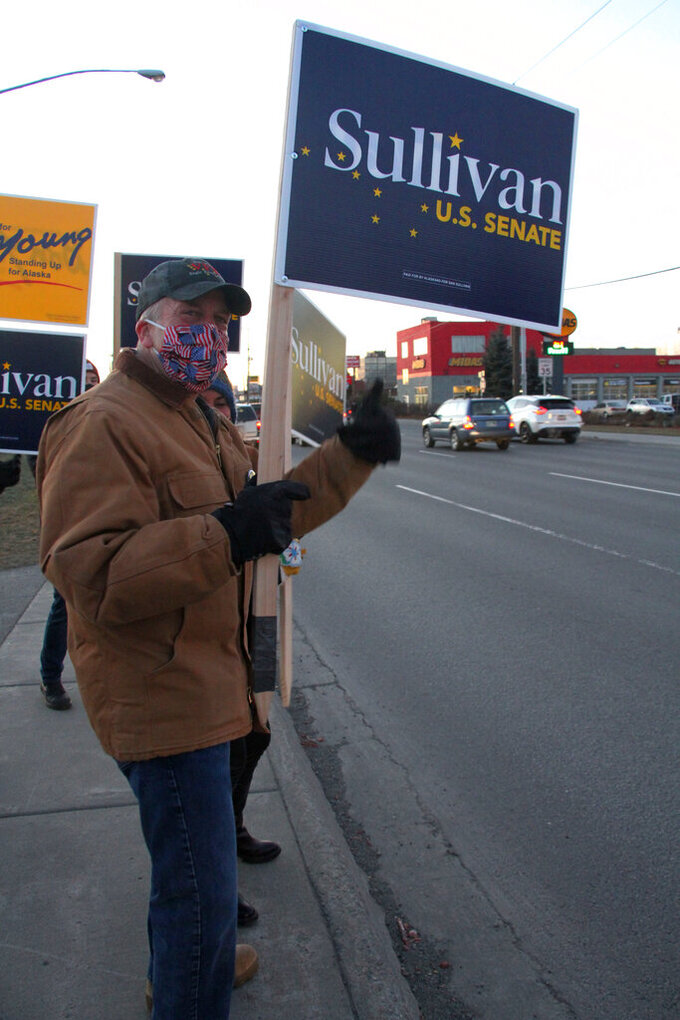 JUNEAU, Alaska (AP) — The major candidates in Alaska’s U.S. Senate race are making their last push for votes ahead of Tuesday’s election, with the campaigns calling Alaskans and knocking on doors and the candidates holding last-minute rallies and stops.

Republican U.S. Sen. Dan Sullivan and independent Al Gross, who is running as the Democratic nominee, planned to wave signs Monday in Alaska's largest city, Anchorage. Gross also planned an evening rally with volunteers via video conference. Both have attended events around the state in recent days to shore up support and fire up enthusiasm.

“There is so much on the line with this election, and we know it's going to be very, very close,” Gross told supporters in his hometown and former place of residence, Juneau, on a “gnarly” Saturday, as rain fell and winds howled through an open-air pavilion.

“We feel very confident in where we stand with the Alaskan voters,” Sullivan campaign manager Matt Shuckerow said in an interview, citing internal polling numbers. But he said the numbers are only as good as people backing them up with votes.

As of early Monday, more than 150,000 voters had cast their ballots, most by absentee, according to the state Division of Elections. About 321,000 total votes were cast in Alaska during the 2016 presidential election, according to division statistics.

Gross said his campaign has encouraged people to vote absentee. Shuckerow said the Sullivan campaign has tried to emphasize “every means possible” for Alaskans to vote.

The campaigns are calling, texting and knocking on doors, to the annoyance of some Alaskans tired of the messages and ads. Money has flowed into the state from third-party groups, with control of the Senate up for grabs.

“It will all be over very soon,” Gross campaign spokesperson Matt Lehner said, noting other groups also are contacting voters. “We try to be as respectful as we can.”

She is among those who sent a letter Monday to Lt. Gov. Kevin Meyer, who oversees elections, citing concerns with a lack of poll workers in some communities, absentee ballots that some individuals say they still haven't received, and “severely inadequate” information on voting options particularly in rural areas where COVID-19 cases are rising.

A message seeking comment on the status of in-person voting locations Tuesday in Alaska was sent to the Division of Elections.

Supporters of candidates in other races also are turning out before Tuesday. Vehicle rallies were held in a number of communities, including Juneau, in support of President Donald Trump. A similar rally in support of Democratic candidate Joe Biden was held Sunday in Anchorage.

Kevin Nye attended the Juneau Trump rally, where vehicles, some decked with U.S. flags or banners supporting Trump, lined up Sunday to parade through town as the streets turned to slush from the snow and rain.

“I know we have a crusty, rough-around-the-edges president,” Nye said Monday. But he said he has been pleased with Trump's economic and energy record, including the opening of the Arctic National Wildlife Refuge's coastal plain to oil and gas drilling.

“To blame the economic decline on Trump is irresponsible because the pandemic did that. I'm proud of the way the president handled the pandemic," Nye said.

Anita Evans, who attended the Gross event in Juneau, said she had become so upset with Trump she decided to do something. She said she's been involved in efforts to elect Gross and Alyse Galvin, the Democratic-backed independent who is challenging Republican U.S. Rep. Don Young.

“You know it's sort of like, instead of yelling and swearing at the TV or the radio, just do something,” she said.

The Senate race has turned nasty, with Sullivan and Gross attacking each other’s honesty and integrity.

The Anti-Defamation League weighed in on a recent ad from the Sullivan campaign showing Gross with a handful of cash and a grainy photo of Senate Minority Leader Chuck Schumer behind him. The Anti-Defamation League, via Twitter, said it was "offensive to play into #antisemitic stereotypes when attacking a Jewish political opponent.” Gross and Schumer are Jewish.

A message seeking comment was sent to Shuckerow, who told Alaska Public Media the ad was meant to emphasize the money from liberals outside Alaska that is aiding Gross' campaign.

“Any suggestion that the senator or his campaign is anti-Semitic is just plain wrong,” Shuckerow told the outlet. The ad came down as scheduled Friday, he said, calling the charges of anti-Semitism “unfortunate."